Wages are likely to continue rising but don't expect the kind of surge the Bank of England are looking for say Bank of America Merrill Lynch.

It is generally taken as a given that if unemployment falls wages will rise.

The relationship is illustrated by the 'Phillips Curve' which relates pay to unemployment rates and underpins the assumption that as the pool of available candidates dwindles, employers have to pay more to attract the fewer number of candidates with the right skillset.

In a 'tight' labour market in which unemployment is low, such as exists in the UK today, economists have been struck by how stubborn wage growth actually is and forced them into considering what other variables might be keeping pay depressed. The unemployment rate sits at 4.4% which places it in territory that many economists believes it cannot stretch beyond.

And predictably wages are starting to rise - wages grew 2.5% on an annualised basis during the three months to the end of November - but they are not necessarily rocketing.

Wages matter as they are key to the outlook facing UK interest rates and the value of the Pound as the Bank of England eye wages when considering making their next move on interest rates, and interest rates in turn drive the exchange rate. In short, higher wages make for expectations of a higher interest rate environment and stronger Sterling.

Contributing a fresh perspective on the relationship between labour market dynamics and pay is new research from Bank of America Merril Lynch (BofAML) who have been conducting a monthly survey of over 5,000 employees which asks respondents about their experiences of the labour market.

The survey asks respondents whether they would consider looking for better-paid vacancies if their current employer was not willing or able to give them a pay rise - the 'auction effect' on the value of labour, from scarcity. Clearly if unemployment is at rock bottom wages will rise from employers boosting pay or employers looking for better pay elsewhere.

The results from Bank of America seem to suggest that most workers would not actually consider 'hawking' their skills to other interested parties or exploring "outside options" as BofAML refers to them, if they were unsatisfied with their present circumstances.

"Our survey suggests c40% of people see a 2-3% pay rise as reasonable. Past pay seems to be one important anchor for what is seen as reasonable. Meanwhile, satisfaction with pay in our survey was more closely related with apparent job security than it was to actual pay growth. These results do not rule out a further acceleration in pay. But neither do they suggest that a sustained acceleration large enough to warrant BoE intention is likely," says Wood.

The explanation echoes those made elsewhere that suggest UK workers are a great deal more cautious when it comes to looking for greener pastures since the experiences of the recession.

Michael Saunders, an external member of the Bank of England's MPC, said in a speech delivered in January that since the recession people have been too afraid to move jobs in search of higher pay, this has allowed employers to sit on staff without having to raise rates to keep them.

But Saunders believes pay growth in the UK should rise to 3.0% in 2018 having observed that employees are starting to venture out and seek greener pastures, and this will in turn require employers to start digging deeper to hold onto staff.

"In recent quarters, the number of job-to-job moves has returned to something like the pre-crisis norm," says Saunders.

And other surveys confirm this trend with a report from CV-Library released in February showing job application rates were seen soaring by a "staggering" 83.6% in January 2018, when comparing findings with December 2017. With unemployment already near record lows, the explanation for the surge in applications must be that people are looking to move jobs.

But the findings from Bank of America are not as enthusiastic and suggest the slow appreciation of wages might persist.

"We ran several questions to uncover whether workers were making use of their potentially improved outside option. The answers suggest they are not doing so to a large extent," says Wood. 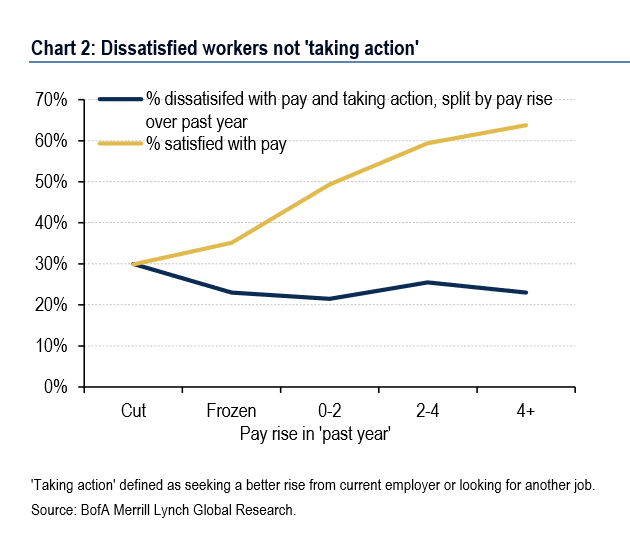 Problems with the 'Outside Option'

One reason posited by Wood to explain the lack of worker take-up of the 'outside option' to raise pay is that not all industries offer such an option.

In industries or geographical areas where there is a monopoly operating or even oligopoly, workers cannot easily move from company to company bidding up their pay as they go.

"Some economists (e.g. Manning, 2003) have argued that local monopsonies could limit workers' ability to take advantage of the 'outside option' in the same way as the past," says Wood.

The steady erosion of worker rights from declining unionisation has also made it more difficult for workers to bid up their pay due to labour market tightening.

"In the past unionisation may have allowed more employees the ability to bid up pay as the labour market tightened. In a low unionisation monopsony world or a world of superstar firms and workers, that might be harder," says BofAML.

By "superstar firms and workers" Wood is referring to the theory that the 'outside option' is not widespread, but the lone preserve of a highly-valued few 'superstar' workers who have the power to auction their skills off to the highest bidder.

It may also be the case that the impact of labour market tightness on pay could be highly industry specific.

Wages are not just a reflection of supply and demand but are also a reflection of productivity which is the amount of wealth a worker makes from his labour, and leaps in productivity via mechanization and skills development tend to be quite industry-specific, and in the long run may be a more important factor on rates of pay than simple labour market shortages.

The BofAML survey found that despite the lack of correlation with labour market tightness earnings are still rising but just not rising as quickly as would be expected from the low unemployment.

The overall conclusion, therefore, is that the Phillips Curve has not so much 'failed' as "flattened".

Another conclusion of the research is that respondents seemed to value job security above pay and this may also explain why most workers do not take advantage of the 'outside option', because there is a risk to moving jobs and if the pay increase is relatively minor it may not be worth the risk.

"It may be that job security is still king and the Phillips curve may be very flat if indeed it is the right model to be thinking of," concludes Wood.