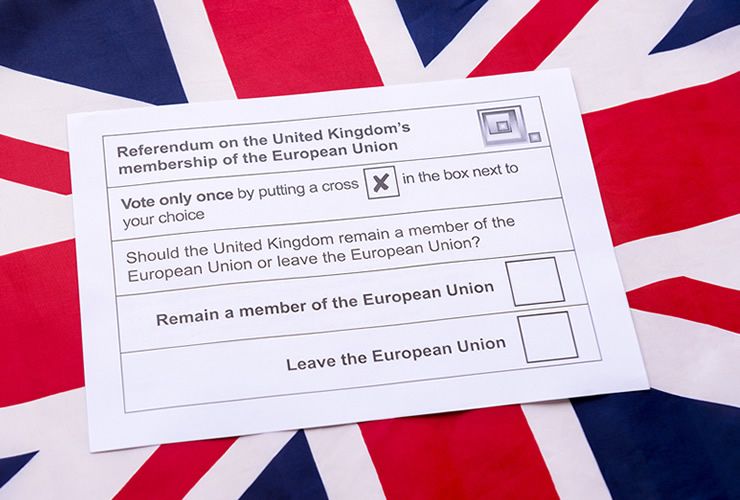 A "No Deal" WTO Brexit would mean the Pound-to-Dollar rate falls to 1.10 and the economy enters recession, contracting by 1%.

The currency market is consistently underpricing the risks posed to Sterling by a possible breakdown of negotiations between the UK and the EU, as well as the likely economic consequences of a “no deal Brexit”, which strategists at HSBC say could see the Pound fall as low as 1.10 against the US Dollar.

Scenarios under which the UK could leave the EU range from a so called soft-Brexit, where little about the current relationship changes, to the “no deal, hard Brexit” that many in the City of London and Westminster have feared since plans for a referendum were first announced.

Each has its own consequences for the economy and for Sterling and all are subjects that research teams at HSBC have spent time getting to grips with and analysing in one of their latest research reports.

“To make a forecast on the UK requires taking a view on a political process which is hostage to the forces of time, logistics, politics and personalities,” says Elizabeth Martins, an economist at HSBC Bank plc.

A “soft Brexit”, where very little changes and the UK remains inside the EU’s single market and customs union, could see economic growth return to the 20014-2016 level of 2% or more.

Although here, domestic political uncertainty and questions over the sustainability of such an arrangement prevent Sterling from recovering to levels seen before the referendum.

Martins says the most likely outcome of Brexit negotiations, her central case forecast, is for what Prime Minister Theresa May terms a “creative Brexit”.

This sees an orderly departure from the EU that begins with the UK entering a transition period on 29 March 2019 and culminates in a near-complete break with the EU and a negotiated free trade agreement taking effect at least two years after exit day.

Under that central-case scenario, the UK economy continues to grow at or around current rates, even though uncertainty around a final deal remains, because a so-called “cliff edge” has been averted by the transition agreement. 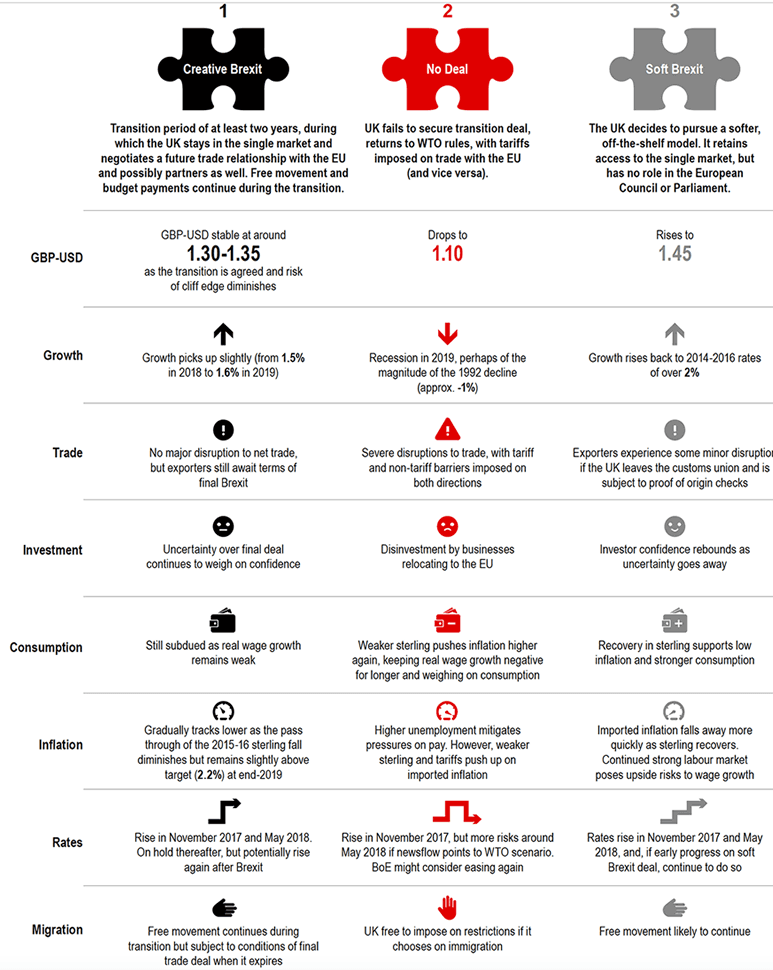 Why HSBC Expect a Good Deal

“We continue to believe that it is in the interests of both the UK and the EU to secure a deal,” Martins writes, in a recent note.

Some of the more pessimistic commentators (or realistic?) have in the past suggested the EU will prefer a negotiated outcome that brings economic harm to the UK, a so called punishment deal, even if it harms the European economies as well.

The logic behind this premise is that Brussels might feel compelled to frighten or intimidate other members who could otherwise think about leaving the EU in the future.

Martins provides several reasons for why the European Union might not do this, which include the £312 billion of exports that the EU sent to the UK in 2016.

A need to minimise the effect of losing its second biggest net contributor to the budget and the fact the union is reliant on London for its financial infrastructure and capital markets activity also provide incentive for Brussels to negotiate in good faith.

But there are still risks of a “No Deal” scenario being driven by domestic politics in the UK, with the ruling Conservative Party bitterly divided over the best approach to leaving the EU - as well as whether to even leave it at all.

Some MPs have proffered a vision that sees the UK remain inside the EU’s single market and customs union while retaining close links in other aspects, which makes it likely that very little about the UK’s relationship with the EU would change.

The bottom line remains that there are a range of scenarios that could befall the UK and the EU at the other end of the Article 50 period, each with its own upsides and downsides. Martins team has summarised them in a table. 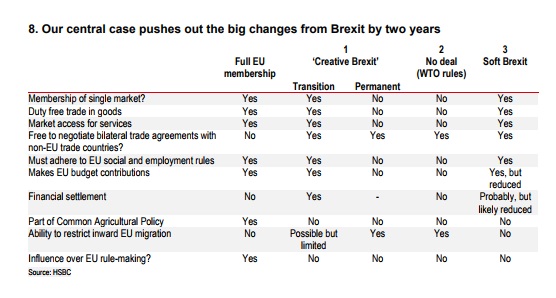 Detailed Implications of “No Deal”

In the event that a “No Deal” brexit is the outcome of talks then the UK and the EU would default to trading with each other on World Trade Organization terms.

The UK would face this choice because it cannot instantly offer better terms of trade to any one country than those it offers to its ‘Most Favoured Nation’. In order to do this legally, a free trade agreement would need to be in place between the two respective parties.

“We think that the pound would fall to 1.10 against the dollar in this case, with some of the falls coming in the months leading up to Brexit as it starts to become clear that a deal is not going to be done,” says Martins. 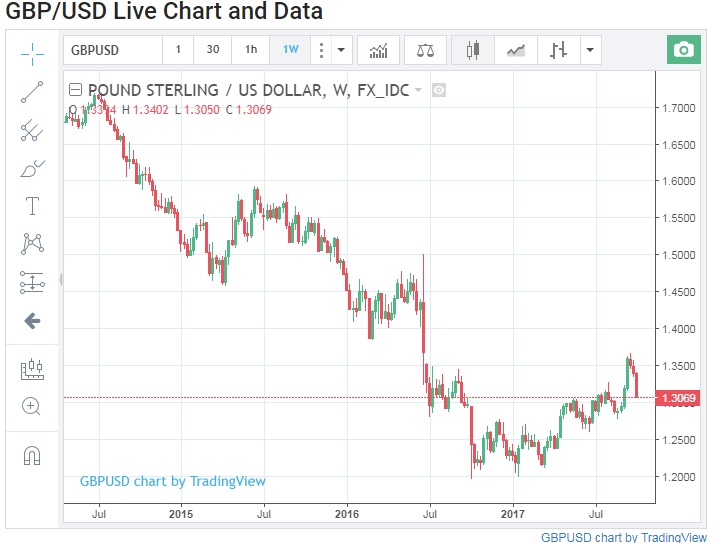 Under the ‘No Deal’ scenario where tariffs are imposed, London’s tax on inbound goods would combine combine with a steep fall in the value of Sterling, raising the cost of imports from the EU and elsewhere sharply.

This would pose a considerable risk to the £300 billion or more of imports that come from the EU as it could curtail British demand for European goods at a rapid rate, posing a challenge to Brussels as such a development would come alongside the loss of the bloc’s second largest net contributor. 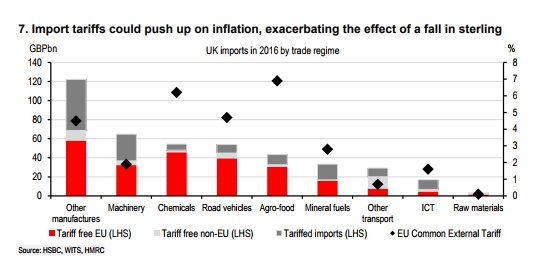 In the opposite direction, the steep fall in the value of Sterling would offset some of the impact of tariffs on UK exports although, while the currency might eventually stabilise, the tariffs would remain attached to British goods and could seriously hinder the competitiveness of UK industry over the medium term.

Additionally, not all goods imported into the UK can be substituted with those made domestically and so the ‘No Deal’ Brexit would likely mean a further increase of inflation and another hit to real GDP.

Non-tariff barriers such as customs checks would add further to the disruption of trade and pose an additional challenge to the economy. Martins forecasts the UK would fall into recession under this scenario.

“How deep and how long would depend on how quickly the UK was able to put in place new measures that enabled trade to flow smoothly again,” says Martins. “Given the much improved state of the banks and still highly liquid financial conditions, we are inclined to think that the magnitude would be more akin to the 1990s recession (around -1% growth) than the 2009 one (-4%).”

“No Deal” Is A Bad Deal For Sterling

The arguments around trade, migration and financial services that shape expectations of the economy under the various scenarios are well known but, in terms of where the Pound might end up under each, a lot less has been said.

“Weaving political risk into a currency forecast is seldom easy and it is no different for GBP amid the uncertainty of Brexit,” says Dominic Bunning, senior FX strategist at HSBC. “Yet it is a vital element and one the FX market has arguably downplayed in 2017, preferring the more visible and intuitive tracking of cyclical drivers through interest rate differentials and the outlook for relative monetary policy.” 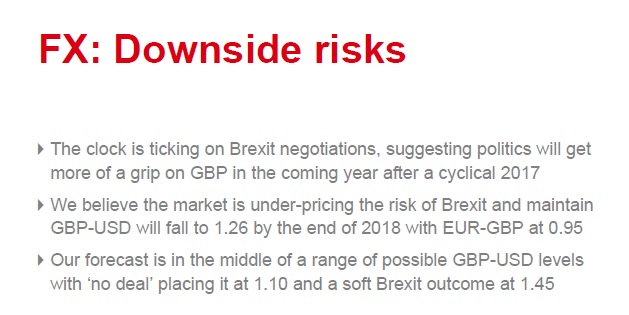 Bunning says the value of the Pound should reflect multiple scenarios with different probabilities, what he terms a blend of outcomes. and notes the blend implied by market prices has persistently been “too complacent” about the risks from Brexit.

“If one were to start with an assumed political outcome, then one’s GBP forecast automatically falls out. However, making an assumption about one unknown to forecast another unknown is fraught with danger,” Bunning wrote in recent strategy note. “Instead, the forecast should be a blend of the different possibilities.”

Under a “soft Brexit” outcome Bunning sees the Pound-to-Dollar rate rising rapidly to 1.4500 while, in the event of a “No Deal” Brexit it could fall to 1.10.

Anywhere inside the 1.30 and 1.35 range is appropriate in HSBC’s central case of a Britain transitioning its way to an almost-complete break with the EU. 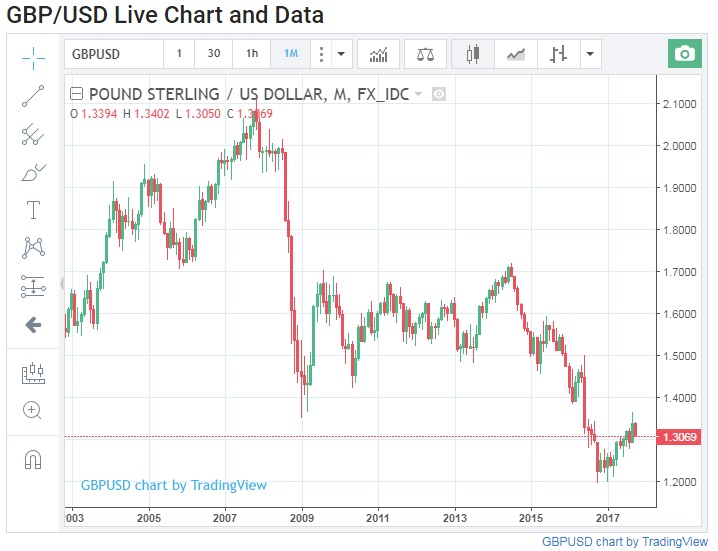 However, the UK will still be inside the Article 50 period at this time and a deal of some kind would certainly still be possible. 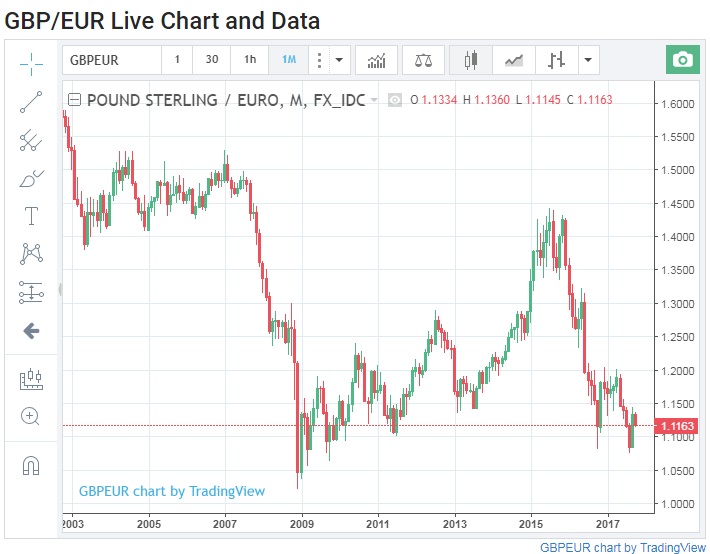 Clearly, and according to Bunning’s analysis, anybody who has either a pessimistic view of the likely outcome from the Brexit negotiations or some kind of preference for a “No Deal” Brexit, would be a seller of the Pound at current levels against both the Euro and Dollar.