The Bank of England’s Monetary Policy Committee (MPC) could soon start splitting into two camps when voting for a rise in interest rates we believe.

Some members of the nine person committee should shift stance in coming policy meetings and start voting for an interest rate hike; and it appears that MPC member Kristin Forbes could lead this flock of Hawks.

This is our assessment based on a speech delivered by Forbes in Leeds on Wednesday February 7.

Forbes has stated she is wary that UK inflation, “is accelerating faster than expected and will overshoot the 2% target by more than in the MPC’s consensus forecast.”

The Bank opted to leave rates unchanged in February with all nine members opting for current settings to remain in place while the Inflation Report saw growth forecasts raised and inflation forecasts cut.

Forbes’ latest assessment however suggests the consensus is not as strong as markets assumed at the time of the report.

Forbes argues the Bank may be overly cautious in their stance on future inflationary pressures and the appropriate response via interest rate settings to these pressures.

She says the Bank must not discriminate in their response to economic reality - interest rate cuts should come as easy as interest rate rises do.

There is certainly a bias in global central bank circles for pre-emptive moves in cutting rates to defend economic growth but notable feet-dragging when it comes to raising rates.

This could be because inflationary pressures have been so nascent; after all, higher rates are considered useful when attempting to stem accelerating inflation.

“I believe that the MPC should be nimble and willing to quickly adjust the appropriate path for monetary policy in either direction as needed throughout this period,” says Forbes.

Forbes says we must not discount the data we have at hand which suggests the UK economy is growing at above-trend rates.

In her opinion the risks to a substantial overshoot to the Bank’s inflation forecasts are high. 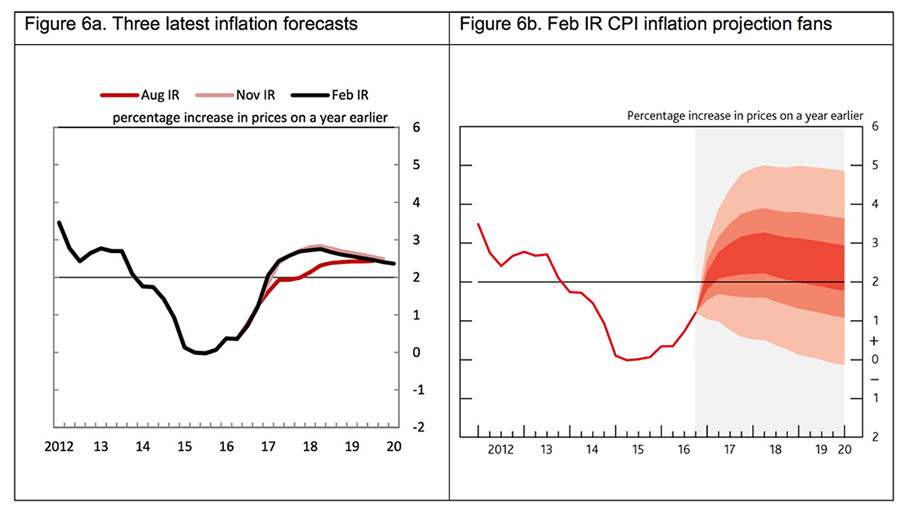 The UK economy is strong and has shown impressive resilience in the face of Brexit uncertainty having been the fastest growing G7 economy in 2016.

Forbes believes forecasters overemphasised the uncertainty the vote caused on consumers and businesses.

She notes too that uncertainty itself is by no means a precursor to weaker economic growth when the supply of credit and easy money to consumers and businesses is as generous as is currently the case in the UK.

i.e any negative impact on the economy of any uncertainty stemming from the EU referendum would have been felt were the supply of credit restricted as was the case during the financial crisis of 2008.

“Monetary policy, however, should not go on hold simply due to heightened uncertainty and volatility. It may take many years for a new regime to be agreed on and a new equilibrium to be reached,” says Forbes.

Forbes notes that the Bank’s forecasters are actually pretty accurate - the catch however is that the accurate forecasts at the Bank are those made prior to the referendum based on a Remain vote winning.

At that time the Bank of England was actively entertaining raising interest rates.

Yet we now have the case where the economy is performing at a pace that exceeds its long-term average AND interest rates have been cut and asset purchases accelerated.

Forbes therefore believes there is too much easy money in an economy that is performing well, and this could well overcook prices.

“If these trends in both the real and nominal data are solidified, it will become increasingly difficult for me to justify tolerating such a large and likely overshoot of inflation - especially when compared to such a small and uncertain softening in growth and unemployment,” says Forbes.

“If the real economy remains solid and the pickup in the nominal data continues, this could soon suggest an increase in Bank Rate,” says Forbes.

We would expect her to lead the Hawks on the MPC and start voting for a rate rise.

That said, Forbes does conced there are risks to her view.

"Risks could easily re-emerge, however, and the UK economic outlook could also deteriorate faster than expected. The dynamics of the UK’s negotiations with the European Union will likely continue to drive movements in sterling and confidence," says Forbes.

She acknowledges the economy could also slow over the medium-term as supply adjusts to any structural changes, including any changes in the UK’s trading arrangements.

"Monetary policy, however, should not go on hold simply due to heightened uncertainty and volatility," says Forbes.