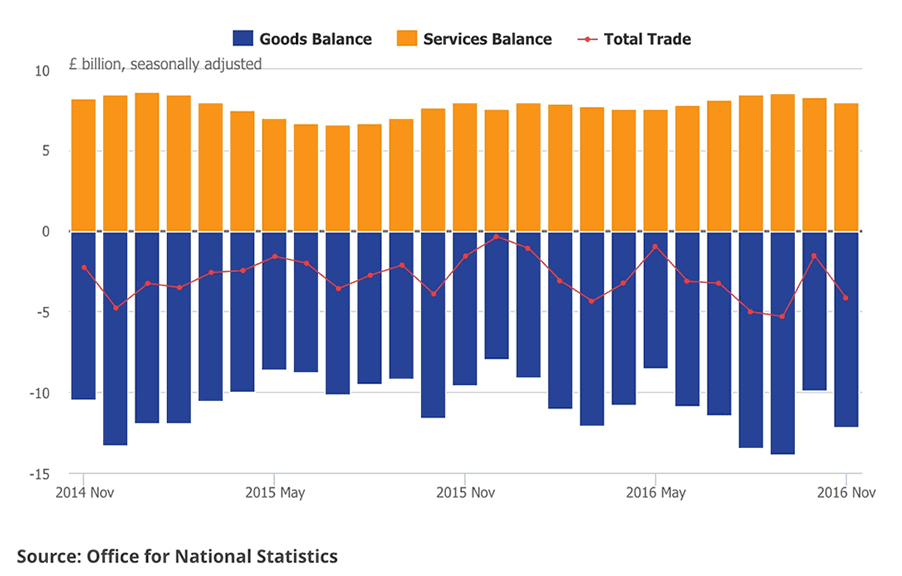 Latest international trade data has confirmed that an expected jump in UK exports on the back of a weaker Pound Sterling is being held back exporters looking to book profit.

Thus, an expected structural rotation of the UK economy away from an unhealthy addiction on imports to one that is able to export more, is not happening.

And this could have serious implications for economic growth in 2017 and beyond we are told.

Economists had expected the fall in Pound Sterling following the EU referendum to force a rebalancing in the economy - but the latest official data on the matter confirms no shift has taken place.

Data from the ONS shows the UK’s deficit on trade in goods and services was estimated to have been £4.2 billion in November 2016.

The widening of the deficit in November 2016 is attributed to trade in goods in which there were increased imports from both EU and non-EU countries, partially offset by an increase in exports to EU countries.

So what is going on, why are UK exporters not growing their business despite the fall in Pound Sterling?

Analyst Philip Shaw at Investec believes he has the answer:

"Looking at volumes reveals a similar picture. Core export volumes (i.e. ex-oil and erratics) fell by 1.2% in the year to the three months to November. At the same time, core imports rose by 5.3%. Interestingly and despite the weakness of Sterling, core export prices are rising more quickly (12.0%) than those for imports (7.2%).

"It seems as though UK manufacturers are using the depreciation in the Pound to boost their margins, rather than to press for greater market share."

This inability of UK exporters to take advantage of the gift that is a weaker Pound could imperil the economy argues Shaw:

"As yet there seems to be little or no response from the volume of exports to sterling’s 15% trade weighted deprecation over the past 12 months. Unless this changes, the pace of GDP growth seems likely to soften over 2017 as higher inflation begins to bite into real incomes and slows the pace of consumer spending. Our GDP forecast for this year remains +1.4% from +2.0% in 2016."

There are also implications for the Pound which could fall much further.

Research from Goldman Sachs shows the UK currency is on the verge of another big slip, largely because of the massive gap between the country's income and spending on its international account.

Because the UK imports more than it exports it relies heavily on foreign investor inflows to keep the Pound propped up.

But Brexit is forecast to see these inflows slide meaning either we export more or we see the Pound fall.

Goldmans believe further GBP weakness is inevitable, and based on the latest trade data, we understand why.