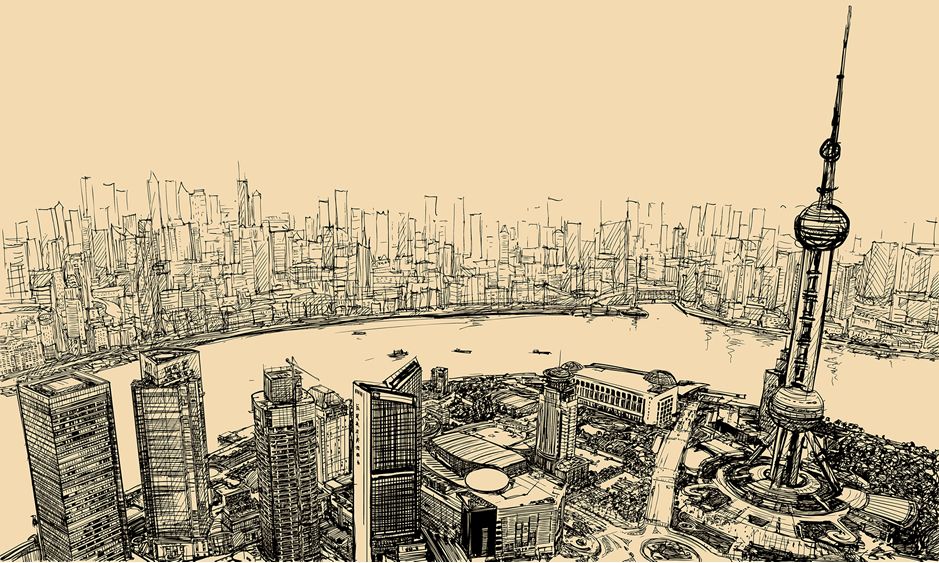 The Chinese Yuan has undergone a strong rally in the opening week of 2017 after China decided to take further steps to support its currency.

Policymakers have undertaken a set of measures aimed at slowing down the pace of its currency depreciation, which has caused massive capital outflow and forced the PBoC to increase the selling of its massive quantity of US bonds.

The moves come at the start of a year in which it is expected the new US President, Donald Trump, will brand China a currency manipulator.

According to Trump, China continues to gain a trade advantage over the US by having an artificially low currency.

There are fears that the US could slap trade tariffs on Chinese imports as a result and in doing so spark a potential trade war with the world’s second-largest economy.

Such moves are aimed to satisfy Trump's campaign promise to bring manufacturing jobs back to the country which has seen its industrial base slip over recent decades.

Any US-China trade dispute would most likely start with the Trump administration designating China as a currency manipulator country.

Yet, at the start of 2017 we see China aggressively attempt to prop up its currency - the opposite to what a currency manipulator would do.

We consider the latest research that seeks to address the question of whether Trumps accusations over Chinese currency manipulation carry any substance.

The CNY is Actually Overvalued

A currency manipulator seeking to gain advantage in international trade artificially lowers its currency to boost its exports.

Thus, the currency would theoretically show up as being undervalued against its rivals.

Yet, analysis from Deutsche Bank suggests China’s Yuan could be one of the most over-vauled currencies at the start of the new year.

According to Deutsche Bank’s research the currency is in fact the most expensive currency of 31 global currencies analysed: 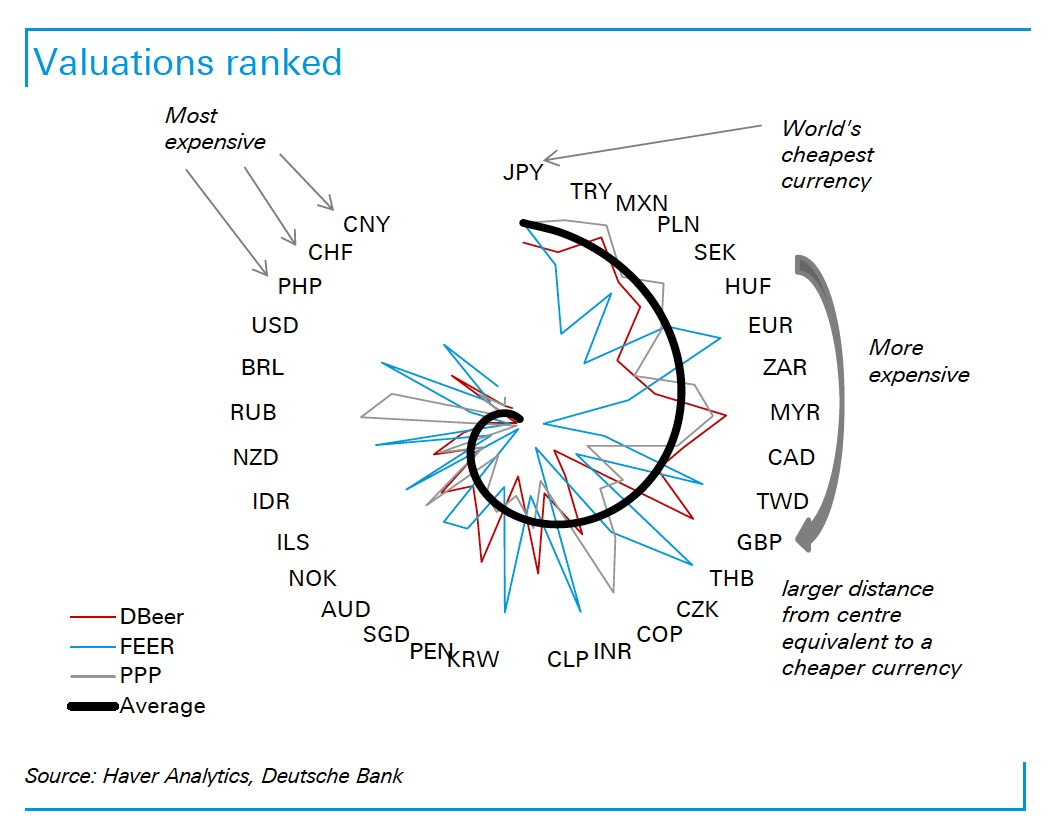 Meanwhile, analysis from Bank of America Merrill Lynch Global Research suggests that even by the United State’s official metrics for identifying currency manipulators, China is innocent.

China Doesn’t Fulfil the Criteria of a Currency Manipulator

Beyond currency valuations, the United States has enacted a number of methods that allows it to single out currency manipulators.

Every year, the US Treasury Department conducts reviews in April and October to determine which country on the monitoring list will be named.

And, based on their own criteria, China is not a currency manipulator.

Analysts at Bank of America Merrill Lynch Global Research have looked into the matter and reported that China fails to meet 2 out of the 3 conditions named below, even though it is on the watch list together with 5 other economies (Japan, Germany, South Korea, Taiwan and Switzerland).

“China is nowhere near the current criteria, which requires a high current account surplus and a rapid buildup of FX reserves,” says a note on the matter from Bank of America. “But we think the Trump Administration may choose to name China anyway to bring it back to negotiations with the US.”

However, if we had conducted the same analysis a few years ago, the accusation could have been levelled with some confidence:

BofA reflect that it has been increasingly difficult to dismiss concerns that President-elect Trump will adopt protectionist trade policies that may hurt trading partners as well as the US itself.

In a report published in mid-November, BofA argued it was too early to base concerns of US trade barriers against China on campaign rhetoric.

But recent tweets from Trump suggests he disapproves the Yuan depreciation, implying a higher probability of naming China as a currency manipulator country after his inauguration in January 2017.

How the US Can Name China as a Manipulator

Despite China failing the currency-manipulator test, Bank of America believe Trump can still achieve his aim.

After all, the criteria used to identify manipulators are far from being fixed.

“Since they are not legally binding, it is not impossible that the future President would ask his Treasury Secretary to revise the criteria, or use his discretion to label China as a manipulator,” argue Bank of America.

If tagged in April 2017, it will be the 2nd time the US Treasury names China as a currency manipulator.

“Back then the criteria were similar to the current version. Both Korea and Taiwan were struggling to resist the pressures of currency appreciation, which appeared to be in sharp contrast of the PBoC's efforts to prevent yuan from excessive weakening in the last 1.5 years. The point of naming China as a currency manipulator could have won more sympathy, had it been made 4 years ago,” say Bank of America.

The designation itself won't enable the President or the Congress to impose an immediate tariff on imports from China.

Nor will it bring any severe penalty on China with the measures proposed.

After all, the last time this clause was used dated back to 1994.

If China were named a currency manipulator, analysts at BofA note the law requires the US Treasury to kick off enhanced bilateral engagement:

“If the assessment of currency manipulation remains unchanged a year after the initial labelling, legislation requires the US president to take one or more of the penalties that include i) denying access to US Overseas Private Investment Corporation (OPIC) financing; ii) exclude China from US government procurement; iii) call for heightened IMF surveillance; and iv) instructing trade representative to assess whether to enter into a trade agreement/negotiations.”

However, most of these measures do not form any immediate restrictive or binding punishment on China.

“We believe the main point of naming China as a currency manipulator would be to bring China back to the negotiation table at the lowest cost. Trump has publicly stated that he supports bilateral vs. multilateral trade agreements (not just for China, but all trading partners),” say Bank of America.

It is possible that the Trump administration will seek to engage China in trade agreement negotiations as soon as possible, even before a manipulation conclusion is drawn.

But depending on the terms and conditions attached, BofA believe China may not be in a hurry to engage.

When they finally sit down, BofA think the future US President could raise concerns about selected industries during the trade negotiations, where he sees the potential for reclaiming jobs in the US.

Recall that under the International Emergency Economic Power Act of 1977 Congress has delegated "emergency" powers to the President to impose selective tariff and quotas, which are likely to materialise.

How would China Respond?

Such a risky move could potentially set the US-China trade relationship off on the wrong foot under the new presidency.

Bofa think China will push back against threatened trade restrictions. Instead of caving in and trying to prepare voluntary export restraints (VER) like Japan did with their auto exports back in the 1980s, analysts believe China would start by strongly protesting against the labelling with the IMF, but not to initiate more aggressive retaliation (such as selling US government bonds from their official reserves) immediately.

“That said, even a 'war of words' could weaken investor confidence not only in the US and China, but globally,” say Bank of America.

The stakes are high.