It may be the great irony of Trump’s presidency that when a property developer came into office the first thing that happened was that the bottom fell out of the property market.

Yet that appears to be exactly what may be happening if recent data and forecasts from certain analysts are anything to go by.

Analysts put the reason down to rising borrowing costs caused by higher inflation expectations due to Trump’s expansionary fiscal agenda.

Another reason was the fall in supply – especially of lower range affordable housing.

The sudden correction came as a surprise to some who had thought that Trump’s victory and the optimistic vibe for the economy which followed, would provide a “Trump Bump” in housing, however, on more careful consideration the poorer data should have come as no surprise whatsoever.

“Thus we've had the election of Donald Trump and the general view is that with tax cuts and infrastructure spending his policies will be expansionary.

“That, in turn, drives up interest rates and thus mortgage rates.

“So, the number of people contracting to buy homes at this new higher financing price is likely to be lower,” said Forbes’ Tim Worstall.

Worstall is not the only one for whom a slow-down in housing comes as no surprise, Nordea Bank analyst Aurelija Augulyte has also been expecting a slump in housing, and has forecast a full-scale downturn in the sector in 2017.

She notes how history shows that it only takes a 100 basis point rise, or 1.0%, in interest rates (and mortgage rates) to cause a recession.

The members of the Federal Reserve Open Market Committee, who set interest rates in the US estimate they will raise them three times in 2017.

A steady decline in residential investment is another early indicator of a slowdown in the sector.

“Housing market is key, residential investment is one of the best leading indicators for the US economy.

“The recent rise in yields will dampen the housing market activity.

“In fact, it doesn’t take much – just another 100bp rise in mortgage rates, and we have a US recession? (Figure 6)

“Yes, I think in some form or shape, we will have a word “recession” as a theme and driver during 2017,” said Augulyte. 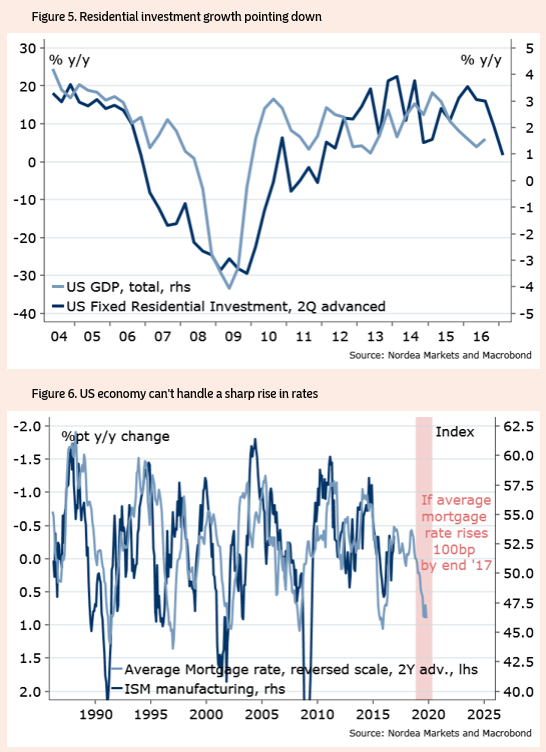 Yet not all analysts are as pessimistic as Augulyte.

A recent report on the outlook for housing in 2017 from overseas property expert Tranio.com sees the Housing market in the US as, “poised for success”.

“We expect some of the top national real estate markets in 2017 to include the United States, Germany, Vietnam and India,” said a report autored by the website..

Tranio.com single out the US market as likely to see success due to investors using property as an “inflation hedge,” against rising yields and an appreciating US Dollar.

“The US market is poised for success. The US dollar is appreciating and yields are going up. Property in USA may be of interest to investors because property often works well to hedge inflation,” said the report.

"The US dollar is appreciating and yields are going up. Property in USA may be of interest to investors because property often works well to hedge inflation,” said the report.

"Property in USA may be of interest to investors because property often works well to hedge inflation,” said the report.

Not all experts agree that property is as good a hedge against inflation, however, as Tranio proposes.

The Daily Reckoning’s Dr. Krassimir Petrov, for example, thought property was a relatively poor hedge when he wrote an article on the subject back in 2008.

Property passes only two out of the five tests stipulated by Petrov as making an asset a good inflationary hedge.

The first is that 'real' assets make comparably better hedges in inflationary markets as compared to financial assets, and property is a real asset.

This means it maintains a part of its value just because of its intrinsic utility value.

Financial assets in comparison, such as stocks, bonds and paper don’t have an intrinsic worth supporting their value.

Secondly, property does not degrade over time like a car or foodstuff – a further positive.

On the downside, however, property is not as easily converted into cash as some other assets such as gold or jewelry, for example.

Another negative according to Petrov is that property is not devisable, which means it cannot be split into smaller units and sold off, unlike, "gold, wine or rice."

The final factor may or may not apply to property, and that is financing.

An asset bought outright with cash acts as a better hedge than one which is financed, since the financing increases the asset's cost to the buyer due to having to pay interest on top of the price-tag amount.

Property can be bought either using cash or financing, however, by far the most usual method is to borrow, and if houses could only be bought by cash alone the market would nosedive overnight.

“Thus, leveraged real estate is not only a poor hedge against inflation but also a very risky one.

"However, if you must hedge, then hedge with gold, not with real estate,” concludes Petrov.

Whilst investors in the UK will be impacted by the new more stringent regulation around buy-to-let mortgages, the same is not expected to be true for the US, where a vibrant B-to-L market is expected to flourish.

“While 2016 witnessed policy changes that affected the popular buy-to-let practice in some markets, we expect buy-to-let investments will continue to flourish in Europe and North America, as yields in some localities may reach as high as 32%.

“In the US, such markets can be found across the Southeast and Midwest, e.g. Atlanta, Tampa, Chicago and Pittsburgh,” said the Tranio.com report.

It is unclear whether the US will support the market for overseas investors as Congress deferred a vote on the US - EB 5 investment visa programme, nor is it clear what Trump thinks about this policy.

Parts of Europe, such as Cyprus have relaxed capital requirements for investors from outside the EU, added the report.

Outside investors now only have to purchase a property of 300,000 euros to be eligible for residency, making Cyprus the cheapest gateway to the EU.