The stock market has risen 6.6% since the election of Donald Trump, as a result of investor’s increased confidence about the outlook for the economy due to Trump’s more fiscally expansive economic policies.

Yet strangely economists have only marginally upgraded their forecasts for growth since election day, suggesting either investors may be over-exuberant and the stock rally lacks a grounding in economic fundamentals -or economists are being unduly cautious.

“According to a Bloomberg poll of economists, the median 2017 growth forecast is now 2.2%, up only 0.1ppt since Election Day,” he said.

This contrasts with bolder growth forecast upgrades of 0.2ppt for 2018, which Costberg puts down to the delay in implementing Trump’s infrastructure spending and taxation plans.

He also points to a reluctance on the part of the Federal Reserve to upgrade their growth forecasts too.

“At its 14 December meeting, the Federal Reserve took a cautious stance, saying it was “too early” to incorporate Trump’s fiscal plans into its forecasts.

Costberg points out, however, that the Fed did highlight improvements in the labour market and crucially raised their expectations for more rate increases in 2017, thereby showing their belief in an economic rebound in other ways, which were oddly out-of-sync with the GDP forecasts.

The explanation for their caution may come from concerns about how the rapidly rising Dollar and interest rates could weigh on stocks eventually.

Kathleen Brooks puts it succinctly in a piece on a similar vein:

“Essentially a rising dollar and rising US Treasury yields are also bad news for US stocks, but the market is not concentrating on that right now.

“While we still think that US stocks could move higher, the rally may move into a more tortuous phase in 2017, when investors try to push the market higher even though they know the risks that could disrupt the rally.”

The rise in borrowing costs in the US is likely to put a strain on the housing market in 2017 according to Aurelija Augulyte, and because Housing leads the economy this might even be a sign of a downturn in the economy.

“Housing market is key, residential investment is one of the best leading indicators for the US economy.

“The recent rise in yields will dampen the housing market activity.

“In fact, it doesn’t take much – just another 100bp rise in mortgage rates, and we have a US recession?

“Yes, I think in some form or shape, we will have a word “recession” as a theme and driver during 2017.

“This should be negative for stocks, revive the bond market bull, and take the transatlantic spread lower,” says Augulyte. 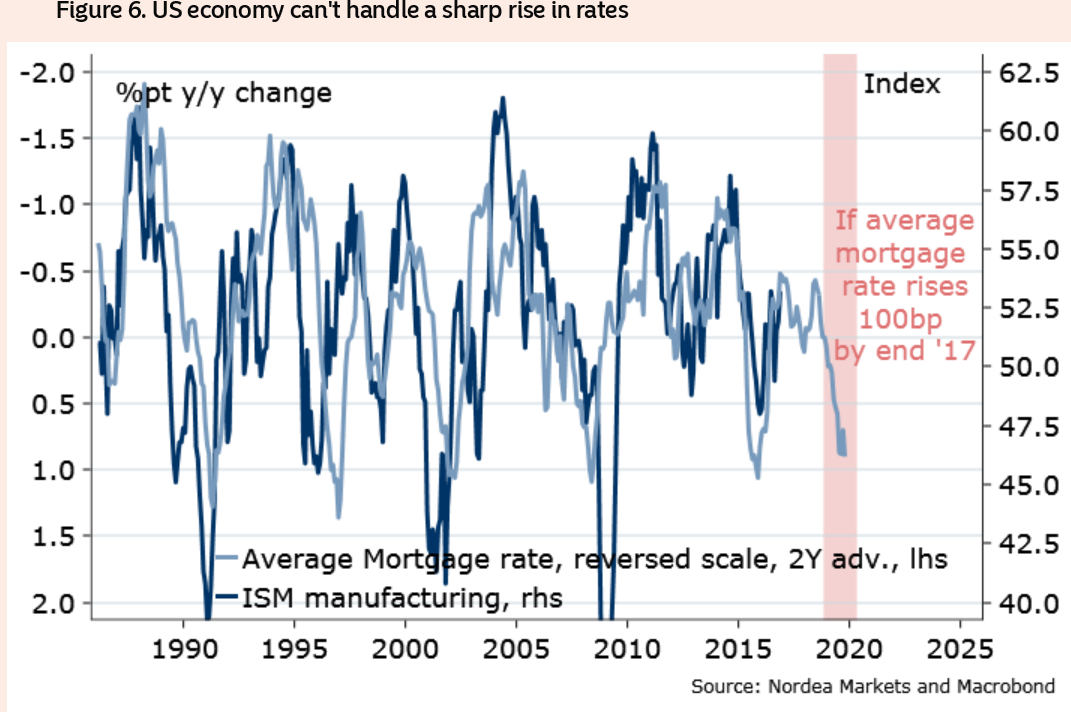 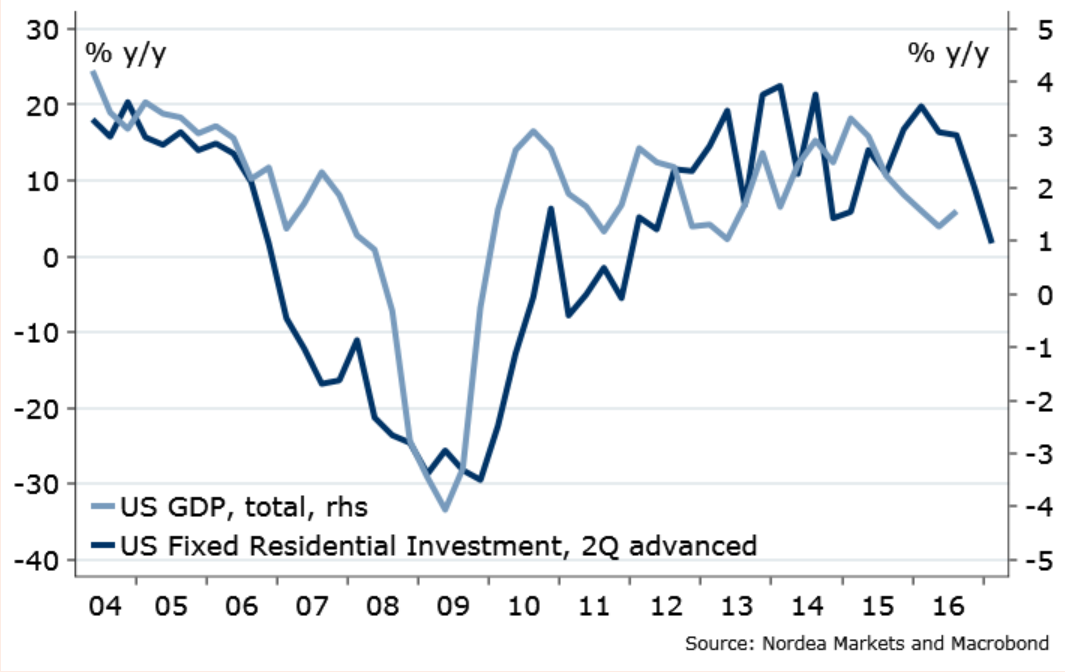 Not all housing data is poor, however, as Thomas Costberg notes, by referencing the positive rise in the NAHB HomeBuilder Survey.

“The December NAHB homebuilder survey, for instance, rose to the highest since July 2005. Are economists too cautious?” Asks Costberg.

Augulyte dismisses the positive labour market data because it is lagging, whilst Housing and Residential leads the economy.

“The US economic cycle is mature, so the lagging labour market indicators are of little added value,” she notes.

For her, risks are to the downside and markets have got it wrong.

She further notes how without a rise in Productivity there will be no ‘real’ growth above inflation.

In such a scenario the growth will all be artificially ‘stimulated’ and therefore unsustainable.

“The recent rise in rates, USD, oil prices will have a negative impact on global economy, some of it immediate, other with a longer lag.

“With expectations, high for the US economy, the risks of disappointment are, too: without productivity growth, which Yellen highlighted multiple times in the latest Fed meeting, there is no reason for a rise in real rates.

“The recent indicators do not signal major pickup in capital investments yet, and the longer-term picture remains uninspiring,” she concludes.