77% surge in Britons looking for work in the US following the referendum result, according to world’s largest job site, Indeed. 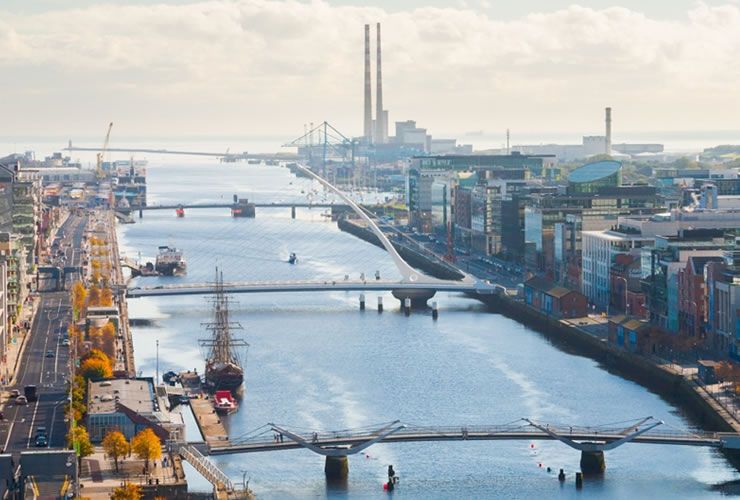 Above: Dublin, a favoured destination for post-Brexit job searches.

The UK’s vote for Brexit spurred tens of thousands of British jobseekers to look beyond the EU for work, with English-speaking countries dominating the most popular choices for would-be emigrants.

Data published by the world’s largest job site, Indeed, reveals that the share of Britons searching for work in the US jumped by 77% in the aftermath of the referendum result.

The US accounted for 30% of all outbound job searches made by the site’s UK users in the weeks after the vote.

Canada, which had been the fourth most popular overseas destination in advance of the referendum, jumped to second place with 13% of outbound job searches following the result.

Not one of Britain’s mainland European neighbours featured in the top five overseas destinations for UK jobseekers.

France, the most popular continental EU country, slipped from fifth place before the referendum to sixth place after it, attracting just 5% of Britons’ outbound job searches.

Ireland sits third in the top countries Brits are looking to work in, attracting 9% share of outbound search, in large part due to its recent economic growth and concentration of high-skilled roles.

At their peak, job searches from the UK to Ireland following the Brexit referendum announcement were 2.5 times higher than the average in the days before the vote.

Search to Ireland remains elevated one month on from the referendum result - Indeed has noted a 22% increase in traffic, while search to the other countries has somewhat levelled.

Ireland has already been tipped as a big winner should financial service firms seek to relocate away from London.

Top countries by share of cross-border job search by UK users of Indeed:

Ireland did not only benefit in a surge from job search from the UK.

Traffic from the rest of the EU also increased. Here the spike was not quite as large as search from the UK, but it was still substantial - 2.2 times higher than the average in the days before the results of the referendum were announced.

Cities like Dublin are increasingly becoming talent magnet cities for EU jobseekers - due to their great locations, good quality of life, ease of ‘big move’ and lower cost of living than cities like London.

Sectors most at risk appear to be those featured in top search from the UK to Ireland, such as: Marketing, HR, Engineering, Transport and Retail. Searches by UK job seekers to other European countries also include roles in Hospitality and Finance sectors.

“We know from our data that Ireland was a major beneficiary of the post-Brexit surge.

"If the UK formally leaves the EU, Ireland becomes the main country with access to the common market where English is spoken as a first language by the majority of its citizens.”

Mamertino notes that the UK workforce wasn’t especially mobile prior to the Brexit, as Indeed highlighted in its report, Europe on the Move in April.

The UK featured as the most popular destination for EU jobseekers looking for work, far beyond the likes of Germany and France.

He says: “While this overseas job search spike may be an emotional reaction to a vote that divided the nation, it spotlights what could be the start of a growing trend of UK-based talent being lured away to dynamic labour markets in English-speaking countries.”

“Outbound search is levelling out somewhat when compared to the 48-hour period following the result, but remains elevated - particularly to Ireland where we’ve noted interest remains with a 22% spike compared to pre-referendum levels.”

“In a post-Brexit global war for talent, Britain’s loss would be Ireland, the US and Canada’s major gain, as employers in these attractive markets are well-poised to lure away a high-skilled workforce from the UK,” concludes Mamertino.