UK earners opted to save £6.2BN in cash during October, less than the £8.1BN rise in September, but substantially higher than the 2019 average rise of £4.6BN.

The reason for the ongoing strength in demand for savings products appears to be linked to the increased interest paid on savings products, although expectations for a tough few months ahead are also impacting behaviour.

"That was likely driven by the attractiveness of higher savings rates on fixed rate savings products. The average new interest rate on fixed deposits rose from 2.49% in September to 3.29% in October," says Ashley Webb, UK Economist at Capital Economics. 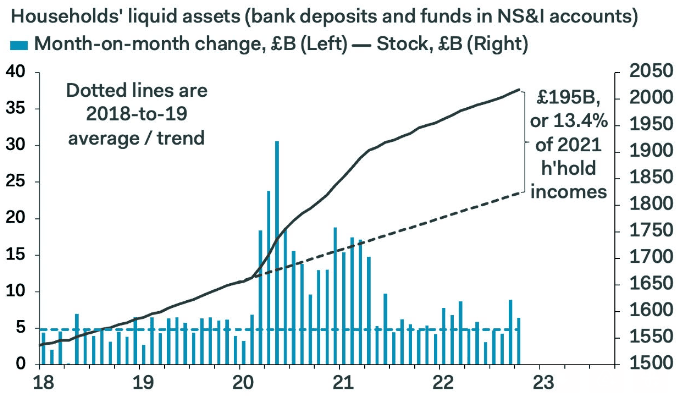 The Bank of England also reported a £0.8BN increase in the amount of credit issued to consumers, which is below the £0.9BN figure the market was looking for but larger than the £0.6BN rise in September.

However, this is still lower than the pre-pandemic 2019 average of £1.1BN.

"Households have remained unwilling to draw on savings or take on more debt in order to support their level of real expenditure, casting further doubt over the OBR’s view that a sharp fall in households’ saving ratio will ensure the recession is short and the subsequent recovery is swift," says Tombs.

The hoarding of savings will pose a headwind to economic growth, which is particularly relevant to a consumer-driven economy such as the UK.

"Households clearly are not spending to their fullest. In addition, the muted level of consumer borrowing in October shows that households without savings are not flexing their credit cards, even though the stock of unsecured debt still is 8.6% below its January 2020 peak. Until consumers’ confidence recovers, unsecured borrowing will remain weak," says Tombs. 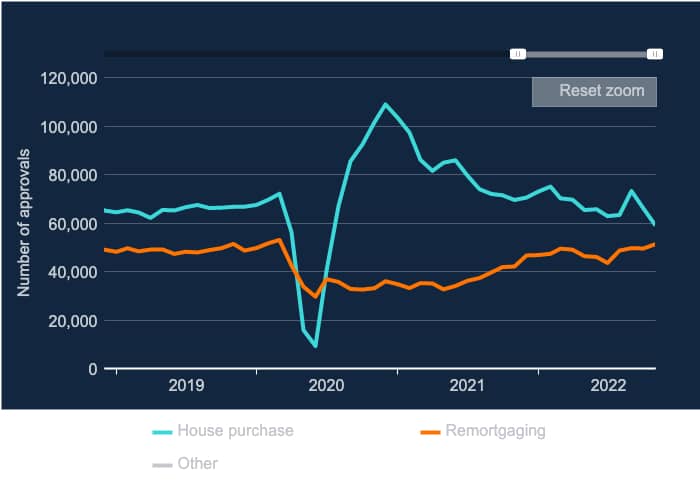 "The sharp fall in house purchase mortgage approvals in October comes as no surprise, given the jump in quoted mortgage rates and the temporary withdrawal of some lenders from the market in the wake of the mini-Budget," says Tombs.

Pantheon Macroeconomics forecasts the housing market will come under pressure over the coming months as the effective rate on new mortgages will likely rise to between 5.5% and 6.0% at the start of next year.

"The relatively modest fall in quoted mortgage rates over the last month, together with the intensifying squeeze on real incomes, suggests that mortgage approvals will continue to fall further over the coming months; we expect them to average just 52K in Q1," says Tombs.

Capital Economics expects mortgage rates will average 5% in 2023 and they see a 12% peak-to-trough fall in house prices.