The S&P Global Purchasing Mangers Index (PMI) for manufacturing came in at 47.3, which is above the consensus expectation for 46.0 and up on October's 46.4.

The services sector PMI read at 48.6, which was ahead of expectations for 48 and unchanged on October's reading.

The composite PMI - which balances the data to give a better snapshot of the overall economy - read at 47.8, ahead of consensus at 47 and up on October's 47.3,

A reading below 50 signals contraction.

"A further fall in business activity in November adds to the chances of the eurozone economy slipping into recession," says Chris Williamson, Chief Business Economist at S&P Global Market Intelligence. 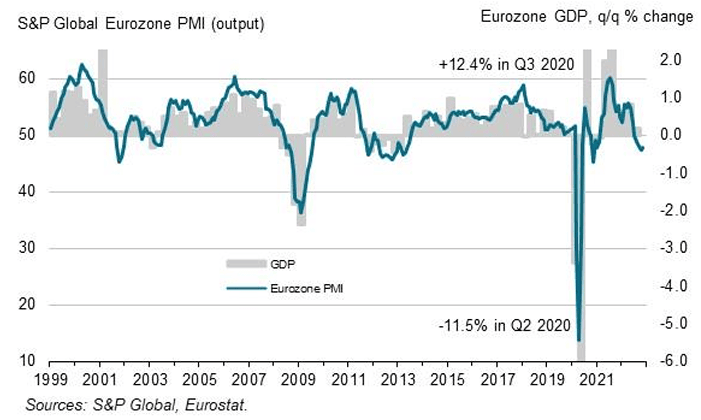 S&P Global says the data confirms a fifth consecutive month of falling business activity, however, the intensity of the slowdown moderated.

There were some positive signs, including a reduced rate of loss of new business, fewer supply constraints and a pick-up in business confidence about the year ahead.

"Business sentiment nevertheless remained gloomy by historical standards, and demand continued to fall at a steep rate, leading to a pull-back in employment growth during the month," said S&P Global.

Improved supply chains meant cost pressures in the economy were starting to alleviate with businesses reporting costs rising at the slowest rate for 14 months.

This in turn allowed selling price inflation to moderate, albeit with rates of inflation remaining elevated.

Factories in Germany even reported the first improvement in supplier performance since July 2020.

"The good news is that inflation pressures are fading on the back of easing supply problems and the imminent recession," says Bert Colijn, Senior Economist for the Eurozone at ING Bank.

"While energy prices remain volatile and businesses are likely to still price through some of the higher costs incurred, these factors do point to a turning point in the inflation rate around the turn of the year," he adds.

Germany overall reported the steepest downturn in business in the Eurozone, with the composite PMI at 46.4.

Output fell in France where the composite PMI registered 48.8, signalling the first drop in business activity since February 2021.

"The latest macroeconomic data from Europe continues to paint a grim picture with the flash manufacturing and services PMIs for France and Germany, and Eurozone as a whole, remaining in the contraction territory of below 50. Although the PMI data still managed to beat expectations, that’s only because we are seeing improvement from a very low base," says Fawad Razaqzada, analyst at City Index.