One of the most closely followed surveys of the professional investor community shows significant levels of pessimism, that could in fact signal a turn in the markets is ahead.

Bank of America's Global Fund Manager Survey for July shows a "full Capitulation" by investors and a "dire level of investor pessimism".

It finds expectations for global growth and profits is at an all-time lows, with cash allocation levels at their highest since "9/11".

Equity allocation is meanwhile at its lowest since the Lehman Brothers collapse in 2008.

Although fundamentals are poor, Bank of America says sentiment would suggest a stocks and credit rally "is likely in coming weeks". 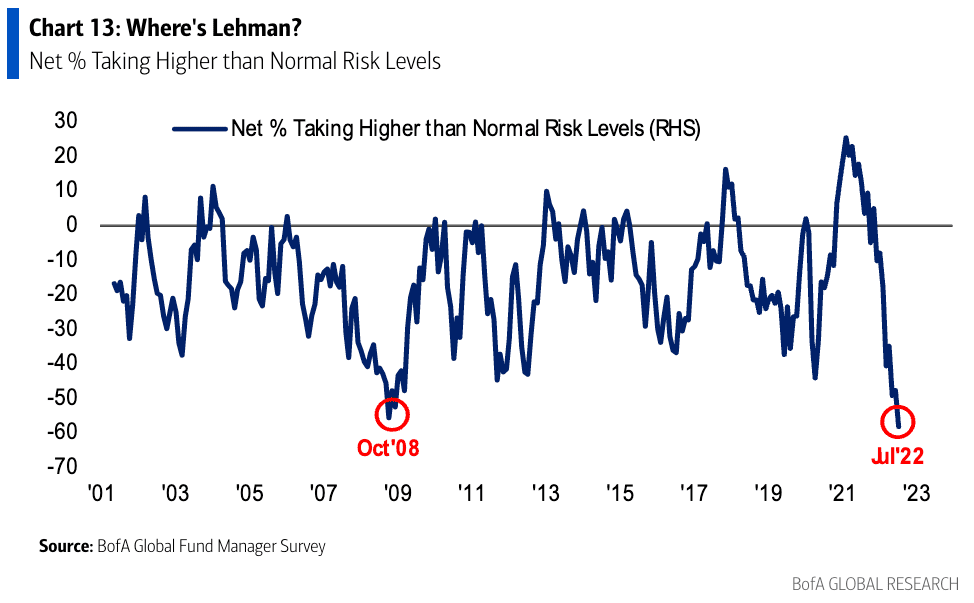 Above: "Net 58% of FMS investors say they are taking lower than normal risk levels, a record high…even surpassing GFC/Lehman levels."

The final painful stage of a bear market for investors is considered to be the 'capitulation' phase, where investors begin to panic sell amidst overwhelmingly negative sentiment.

Some indicators in the survey are now suggesting this is the market's current phase.

The capitulation phase is then followed by a stabilisation as investors start to return to the market, from where a rally ultimately evolves.

The phase is characterised by crowded positioning in some assets, with the 'safe haven' U.S. Dollar seen as the market's preferred bet, but the number of investors saying the U.S. Dollar is overvalued has hit a record of 60%.