According to research from CV-Library - one of the UK’s largest online job sites - 76.4% of surveyed UK professionals intend to look for a new job in 2022, with 57.6% looking to re-skill.

The report says data support the "The Great Resignation" narrative, with the driving factor being a "desire for a more meaningful career, better long-term job security and being unable to find a suitable job with their current skills".

The findings come alongside new thematic research from investment bank Morgan Stanley that finds a significant number of Europeans are due to exit the corporate workforce in the foreseeable future. 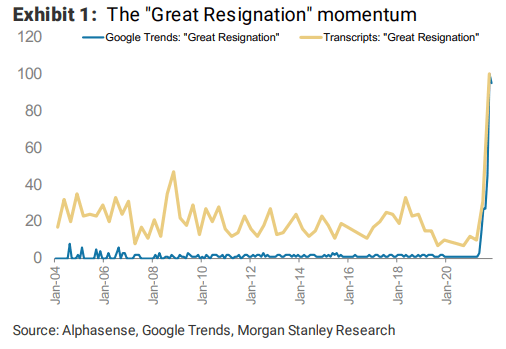 The findings will underscore a gradual realisation at global central banks that inflation is likely to be more 'sticky' than had been previously expected as wage rises provide the kind of inflationary pressures that cannot be explained away as being transitory.

Findings on workforce churn and associated wage pressures therefore underscore a view that central banks will have to be more proactive in raising rates during 2022.

CV-Library asked 2,000 survey respondents for the main area's employers should focus upon to ensure that they don’t lose their best staff 2022.

The leading answer? 57.3% said they should "offer top salaries".

CV-Library found 41.3% of respondents that were looking to change their employment situation were doing so to pursue higher salaries. 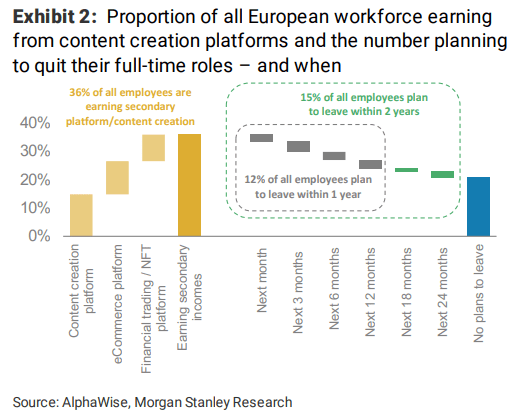 The intentions of UK employees to move will be supported by a strong labour market: the latest data from the ONS found the number of people seeking out of work benefits fell by 14.9K in October, despite the government's furlough scheme ending in September.

"The jobs market is booming," says Kallum Pickering, Senior Economist at Berenberg Bank. "The rapid recovery from the pandemic shock plus the huge policy tailwind continued to underpin the UK labour market recovery in September." 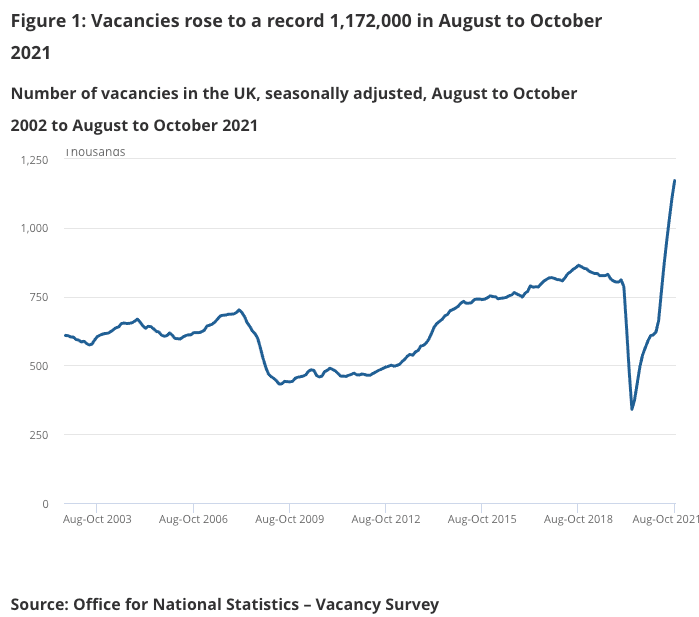 Wage pressures are evident as the ONS' average earnings index with bonuses included rose 5.8% in September, surpassing consensus estimates for 5.6%.

Morgan Stanley's research finds that the pandemic has opened the door to new opportunities for employees, thereby offering the prospect of new careers and contributing to labour market churn.

"The received wisdom is that as Covid subsides, and with modest extra flexibility from employers, the majority of people will reembrace their prior routines," says Stanley, "Our data suggest otherwise. If anything, added flexibility provided by employers is allowing staff more time and leniency to earn additional platform or content creation income."

This, he says, is leading to a sizeable portion of the European population to consider leaving their full-time job altogether.

Morgan Stanley finds post-covid shifts in the workforce make for higher inflationary pressures and their research suggests we are entering an era with powerful coalescing
forces at play:

"Consequently, Gen-Z may be one of the most expensive in recent memory to retain (or at least to dissuade from "exiting" the workforce)," says Stanley.

"Even if only one in 10 of those aspiring to leave in the coming 12 months actually does, the implications for businesses, wages and ultimately inflation appear to have been underestimated by the market," he adds.

The strengthening UK labour market has increased expectations amongst investors that the Bank of England will raise the base interest rate from an all-time lows in December.

Members of the Bank's Monetary Policy Committee have said raising interest rates would only occur if they felt the labour market was recovering from its Covid pandemic dip in a conclusive manner.

Even if they swerve a December hike, official and survey data covering the jobs market means the Bank would find itself running out of reasons not to raise rates.

That is why the market attaches an above 100% chance of a February 2022 interest rate hike which would be followed by a number of further hikes over the year.