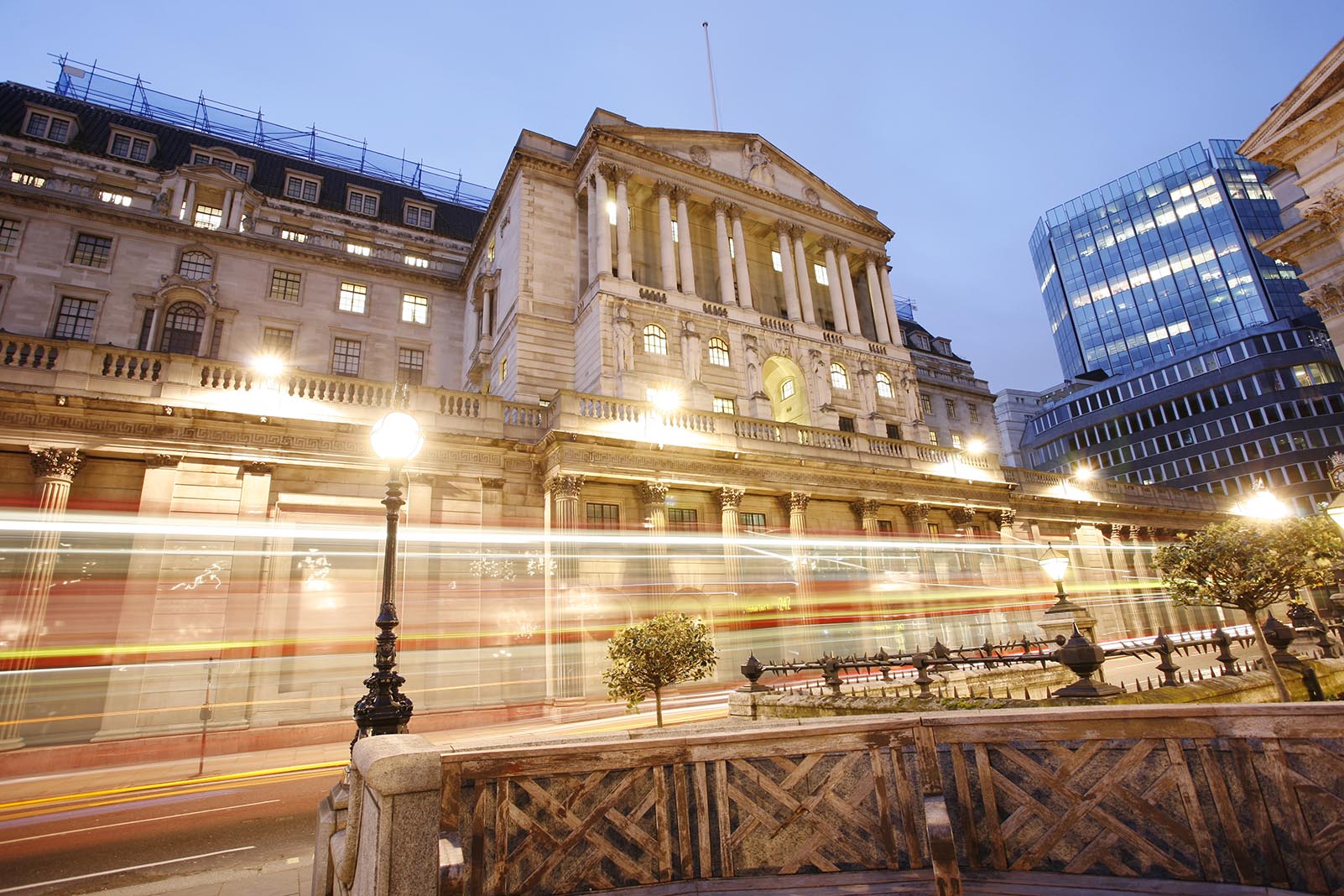 Bank of England policymakers set the UK’s monetary policy with the aim of keeping inflation low and stable, which involves a careful calibration of borrowing costs across the economy that is brought about by changes to the level of the Bank Rate and the use of other policy tools like quantitative easing (QE).

Bank Rate has been set at 0.10% since it was cut from 0.75% in March 2020 after the BoE recognised that it would need to provide maximum support to companies and households if the economy was to remain capable of delivering the desired level of 2% inflation over the medium-term.

But the circumstances of the UK economy have changed in 2021 and particularly those involving inflation, which has risen far above the BoE’s 2% target and is widely expected to remain above it for quite some months yet as a result of international developments connected to the pandemic.

This has left the BoE with a careful balancing act on its hands and difficult decisions to make in the months ahead about whether or not Bank Rate should remain at its crisis period level.

Such a low level of Bank Rate has an uplifting effect on the rate of inflation, albeit one that is milder than the effect of 2021's increases in global commodity prices, the cost of manufactured goods and price of international shipping.

“I continue to believe that higher inflation will be temporary because it is in the nature of the underlying causes, but the energy story in particular means that it will last longer and it will of course get into the annual numbers for longer as a consequence of that. And that raises of course for central banks the fear and concern of embedded expectations,” Governor Andrew Bailey told the Group of 30 Annual International Banking Seminar on Sunday.

The above is why in recent months the BoE has begun to communicate to financial markets, companies and households alike that at some time in the not too distant future the bank will likely decide to begin reversing the interest rate cuts that were announced amid the unprecedented circumstances of March 2020. 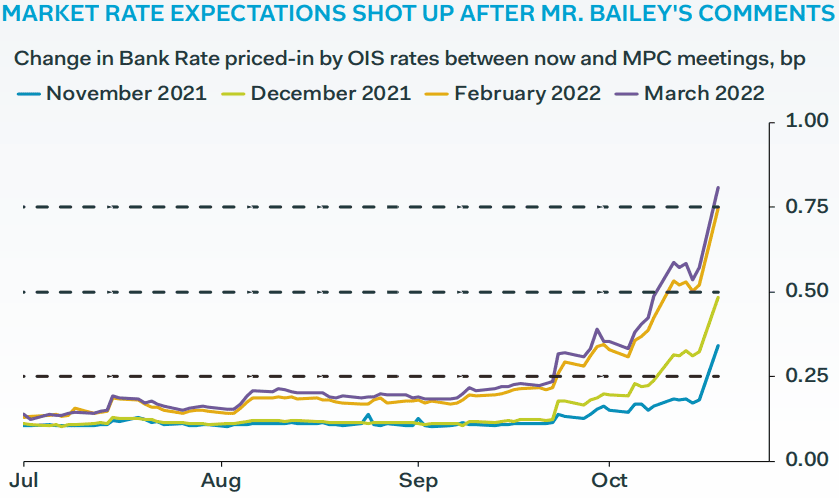 The BoE’s stance has been misconstrued in parts of the news media and financial markets however, and especially in relation to the likely timing of any eventual decision to begin lifting Bank Rate, which is why some economists have sought to set the record straight this week.

“The Financial Times and Bloomberg emblazoned their websites with Mr. Bailey's comment that the BoE will have to act" to tame inflation. But this phrase needs to be seen in context,” says Samuel Tombs, chief UK economist at Pantheon Macroeconomics and the most accurate forecaster of the UK economy in 2020.

“Two points stand out. First, policy action is contingent on the MPC viewing medium-term inflation expectations as too high and believing they pose a risk to the inflation outlook,” Tombs wrote in a Monday briefing for clients, referring to Governor Bailey's statements on Sunday.

The Governor has been misrepresented in this article that has sparked a huge rise in near-term interest rate expectations (1/5)https://t.co/OkDWd2lIl8

“Second, the Governor did not think he was saying anything new. Instead, he reiterated the "signal" provided in the minutes of September's meeting, that rates might need to rise to address inflation expectations. He surely would have found a better forum for expressing a clear change in view,” Tombs also said.

Governor Bailey’s Sunday remarks at the 36th Group of 30 Annual International Banking Seminar were misconstrued as an indication that the BoE is almost certain to raise Bank Rate following the November 04 meeting of the Monetary Policy Committee when in reality the governor made no such suggestion.

In reality, the governor merely reiterated in more candid form what was already communicated in the official minutes of September’s Monetary Policy Committee meeting, a message that had already been clarified through numerous public statements made by BoE officials since. 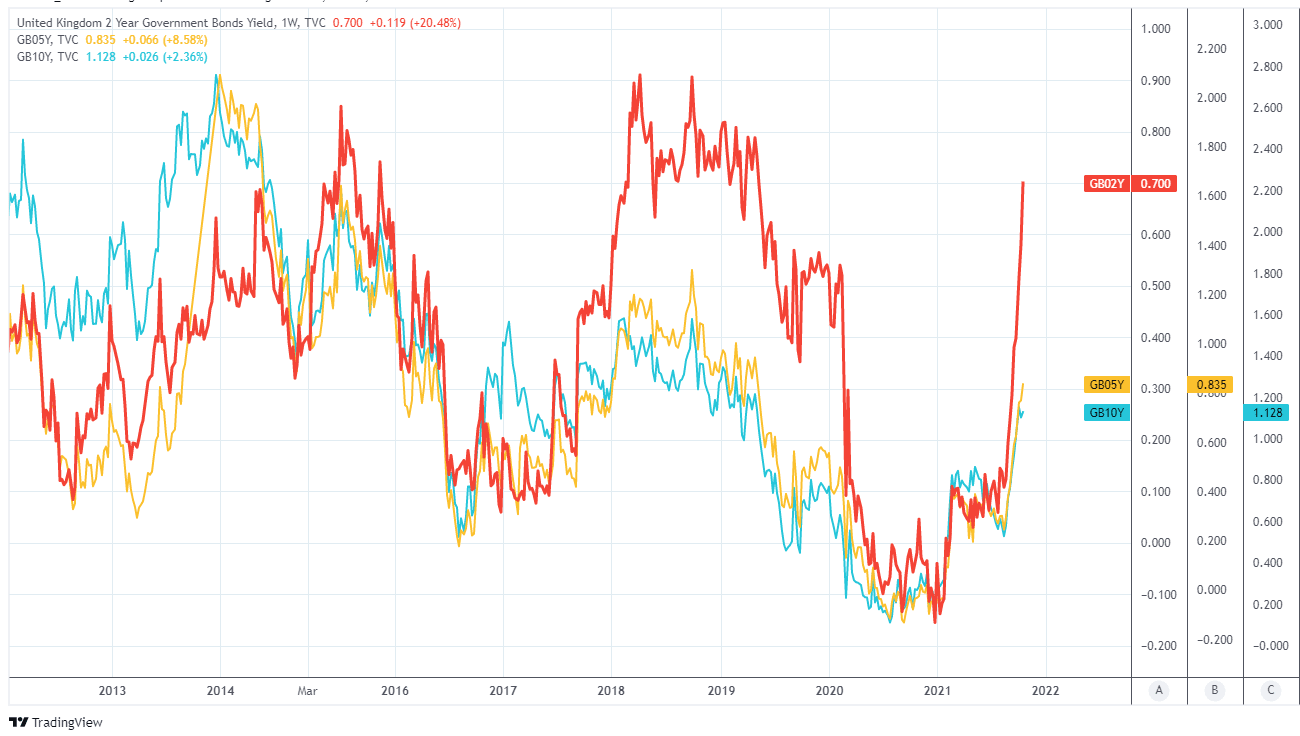 Above: UK government bond yields of 2-year, 5-year and 10-year maturities. 2-year borrowing costs - among the most sensitive to changes in Bank Rate - have risen sharply since late September.

“Our money is still on the first move coming next year, although the risks are tilted towards it happening before our forecast of May. Either way, the key point is that irrespective of when the first hike arrives, the subsequent pace of tightening is likely to be more gradual and slower than is currently priced into the markets,” says Neil Shearing, group chief economist at Capital Economics, in a research briefing last Friday.

The BoE's September and subsequent message has been that there are risks of a prolonged period in which inflation remains above the 2% target and that as a result of this, it could become necessary for the bank to withdraw the interest rate cuts announced in 2020 in order to mitigate those risks.

But September's minutes also made clear that all members of the BoE's rate setting committee wanted to see clear evidence that last month’s winding down of the government’s furlough scheme was weathered by the economy without a meaningful adverse impact on employment levels.

There was in addition a strong indication in paragraph 64 that a majority of the nine voters on the rate setting committee also ideally wanted to see the coronavirus-inspired fall in UK GDP fully reversed before voting to lift interest rates, which could take until early 2022 even if the economy is unharried by the coronavirus this winter.

"While we're not completely out of the water I expect us to be back to the pre-pandemic level, certainly in the early part of next year, but possibly a month or two later than we thought we would be in the summer," Governor Bailey told the annual ECB Forum on Central Banking on September 29.

The BoE’s September policy decision and the various subsequent remarks of MPC members make clear that there’s a meaningful chance that Bank Rate could rise in the near future, but also that the conditions for this to happen are unlikely to be met before the opening months of next year.