Business confidence increased for a fourth consecutive month, by 4 points to 33% in May, the highest level for three years.

Optimism regarding the economy rose 5 points to 37%, the highest since 2016, while firms’ trading prospects were up 3 points to 28%.

The improvements come following the third phase of unlocking on May 17 that saw most of the remaining UK businesses open up, underpinned by the country's vaccination programme which is accelerating once following a slowdown in April. 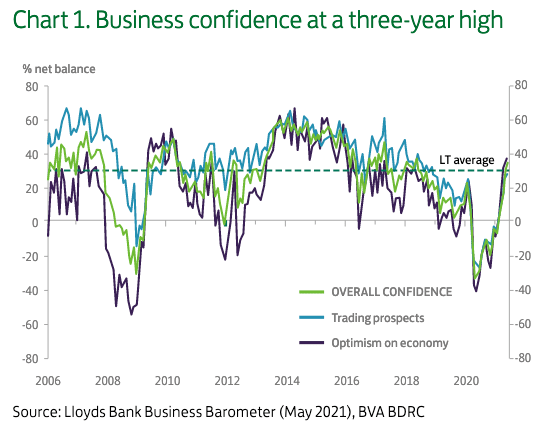 The assessment of trading prospects for the year ahead rose 3 points to 28%, the highest level since late 2018, with 42% (up from 39%) expecting stronger business activity and 14% (unchanged) anticipating weaker output.

The survey also revealed the country's labour market continues to improve with staffing expectations increasing 6 points to 14%, with a third of businesses anticipating an increase to their workforce.

The findings come a day after the ONS said their measure of online advertisements reached pre-pandemic levels and comes a week after the flash PMIs for May showed an increase in hiring intentions at UK firms.

The findings on the labour market are important from a currency perspective: the Pound rose on Thursday after Bank of England's Gertjan Vlieghe said an interest rate rise would be required at an earlier-than-expected date were the labour market to improve more markedly.

With hiring intentions rising the prospect of a jump in unemployment when the government's jobs support scheme ends in September diminishes.

Pay expectations have stabilised after recent rises and remain below pre-pandemic levels, according to the Lloyds Business Barometer.

Pricing expectations at businesses meanwhile edged higher for a fourth month, but remain below pre-Covid levels.

Confidence increased in eight UK regions or nations, especially in Wales, Yorkshire & Humber and the South West, but it fell in the North East, London and the North West.

Confidence increased the most and is the highest in manufacturing, with rises also in retail, construction and services; in the subsectors, strong trading prospects include transport and hospitality.