Europe's economy contracted -0.6% in the opening quarter of the year according to EuroStat, building on a -0.7% decline seen in the fading months of 2020 and officially marking a technical recession given the second consecutive instance of negative quarterly growth.

That's a second inside of the last year, although it could matter greatly for data in the months ahead that the overall scale of the decline was less than anticipated by consensus among economists who'd looked for -0.8%.

Put differently, economists and markets were looking for the downturn to accelerate in the first quarter but in reality it actually lessened, albeit at the margins. 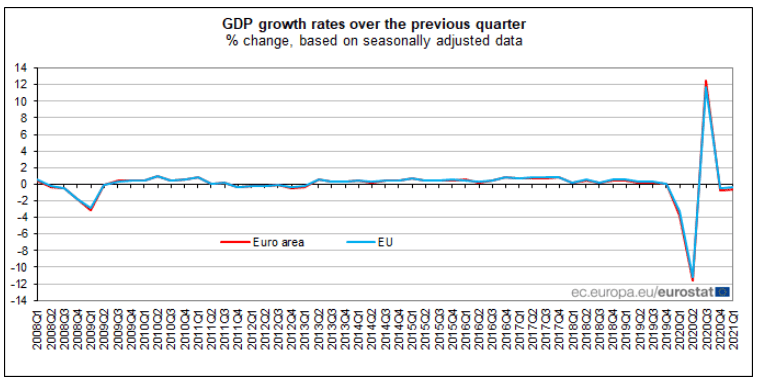 Colijn and the ING team offer a similar take on the Eurozone's first quarter and outlook for the months ahead as that given by Philip Lane, chief economist at the ECB, in an interview this week with Sweden's Dagens Industri TV.

Lane told his interviewer that he and other Eurozone policymakers seen the May and June months giving way to a robust rebound from the current economic trough, with this likely leading to smart second quarter growth outcome that is subsequently bettered in the third quarter.

"We do think the economy will be growing in May and in June, and even more strongly in the third quarter between July and September, with that momentum continuing into Autumn," Lane said.

The growth rebound is necessary not only to draw a line under the pandemic inspired economic crisis but also for the ECB to be able to chart a course toward an inflation target that has for long time been elusive.

This is notable because other Eurostat figures confirmed on Friday an anticipated -0.1% decline in the all-important measure of "core inflation," which fell from 0.9% to 0.8% for the month of April on Friday and in the process will have offset for the ECB the increase seen in the main barometer of price growth.

"Our position that the EZ would experience barnstorming headline inflation in Q2 just got a margin call. Granted, the headline is still rising, and could well increase further, but it’s not as hot as we predicted," says Claus Vistesen, chief Eurozone economist at Pantheon Macroeconomics.

Overall Eurozone inflation rose strongly from 1.3% to 1.6% last month, largely due to a 10.3% increase in energy prices though with lesser increases also seen in food products, both of which are excluded from the more-important "core inflation" measure because of the way in which they're influenced by external factors.

Services price inflation and non-energy industrial goods price inflation also rose, though less than was the case in product categories like energy, food, alcohol and tobacco where price changes are influenced by global market factors as well as the decisions of governments.

Friday's data left Europe's main inflation rate sitting not far from the "close to but below 2%" target of the ECB, although the weaker "core" is one which the Frankfurt-based institution would likely prefer to see reaching its target.

"It is very important for the long-term stability of the European economy to reach that target. All of our measures, including the asset purchases, are calibrated to that end," the ECB's Lane said.