From a markets perspective, the figure is a an easy beat on the consensus expectation for a reading of 5.9%, suggesting markets might yet be underestimating the full scale of the U.S. economic rebound. 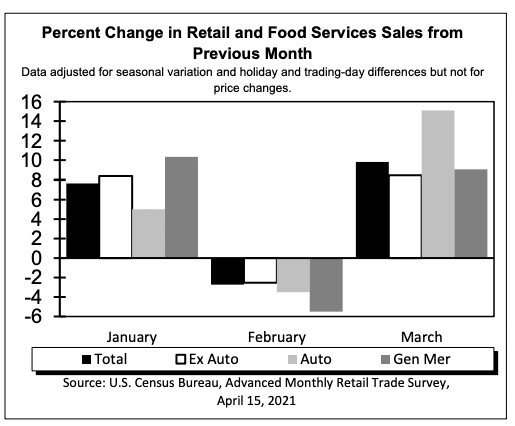 The Dollar was relatively unperturbed by the data and was seen trading lower against the Euro, Pound and a host of other major currencies in line with its general April underperformance.

The muted foreign exchange market impact surprised analysts given it has been the case in 2021 that a 'U.S. exceptionalism' trade has gripped markets, whereby strong day leads to rising inflation expectations, higher bond yields and a stronger Dollar.

The retail data showed spending at restaurants, vehicle fuel and vehicles made strong upward contributions to the numbers.

The control group of sales, which Judge explains excludes the latter components in addition to building materials, and feeds more directly into goods consumption in GDP, showed a slightly slower, but still very impressive 6.9% gain, on broad-based strength.

"This data is another indication of the scale of the dramatic acceleration that is underway in the US economy. Spending will increasingly be tilted towards services, including restaurants, that are re-opening ahead, while some other retail sales categories will benefit from a return to in-store shopping," says Judge.

Looking ahead, the $1,400 stimulus payment will keep retail sales momentum strong for April and with job creation continuing to improve in tandem with the growth in jobs, according to James Knightley, Chief International Economist at ING Bank.

ING say economic growth rates in the U.S. could reach double figures in coming months as the ongoing relaxation of Covid containment measures will increase the opportunities for job creation and spending.

"This would leave the level of GDP above pre-Covid levels, underlining the effectiveness of the US response to the pandemic," says Knightley.

While the outlook for retail sales remains supportive Knightley says consumers are increasingly likely to switch purchases away from "things" to "experiences" as they make up for lost time.

The direction of U.S. economic growth is meanwhile likely to heap pressure on the U.S. Fed to bring forward its planned timing on the first interest rate hike.

Such a move would typically be expected to be supportive of the Dollar.

Economists at ING find it increasingly difficult to believe that the Federal Reserve will wait until 2024 before raising interest rates.

They currently anticipate the first move on interest rates to occur in the second quarter of 2023, but with inflation almost certainly hitting 4% in May and likely to stay above 3% for most of the next 12 months the risks are said to now be pointing towards a December 2022 rate hike.