The UK economy expanded by 0.4% in February 2021 says the ONS, helped by a 0.2% expansion of the country's dominant services sector, and more growth is to come say economists.

The market consensus was expecting a more generous reading of 0.6% growth in GDP, however the disappointment of the miss was somewhat cushioned by an upgrade to January growth to -2.2% from -2.9% previously. 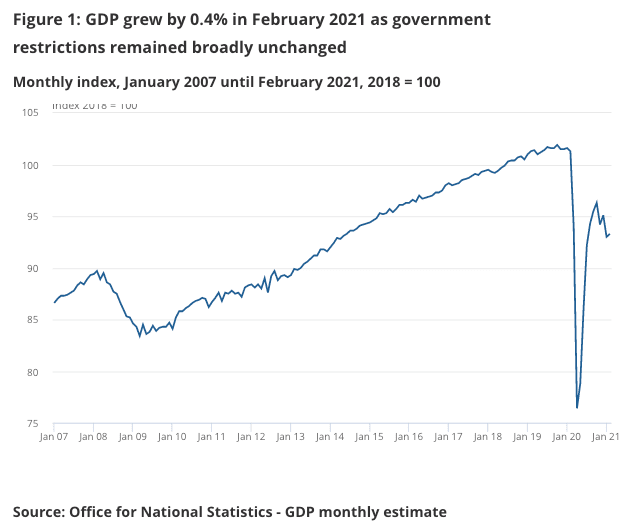 The market impact of the data release was however negligible, given investors are looking forward to the economic reopening of the UK economy over the summer months.

"Despite the positive news that a recovery appears to be underway, economic output remains very depressed and heavily propped up by a host of aggressive fiscal and monetary policy measures," says Pickering.

However, he adds: "a successful vaccine rollout, aggressive policy support and a solid global backdrop set the stage for at least two years of rapid economic rebound from the massive pandemic shock of 2020."

The economy received a substantial boost on Monday April 13 when a significant portion of the service sector was reopened, including non-essential retail and some hospitality businesses.

The scale of the recovery is arguably more important to policy makers than how the economy performed during the depths of lockdown.

Looking at the sub-components of the economy, uutput in the production sector grew by 1.0% in February 2021, as manufacturing grew 1.3% following contraction in January.

The construction sector grew by 1.6% in February 2021, driven by growth in both new work and repair and maintenance.

"Not even the downward revision of January’s figure could take the shine off another strong month of growth for Britain’s builders," says Gareth Belsham, director of the national property consultancy and surveyors Naismiths. "The construction industry still stands head and shoulders above all other sectors as the fastest growing part of the economy."

Belsham says output among private sector housebuilders has surged by nearly 141% since its low point of 12 months ago, and infrastructure work has long since soared past its pre-pandemic level.

According to the ONS, February’s GDP is 7.8% below the levels seen in February 2020, compared with 3.1% below the initial recovery peak in October 2020. 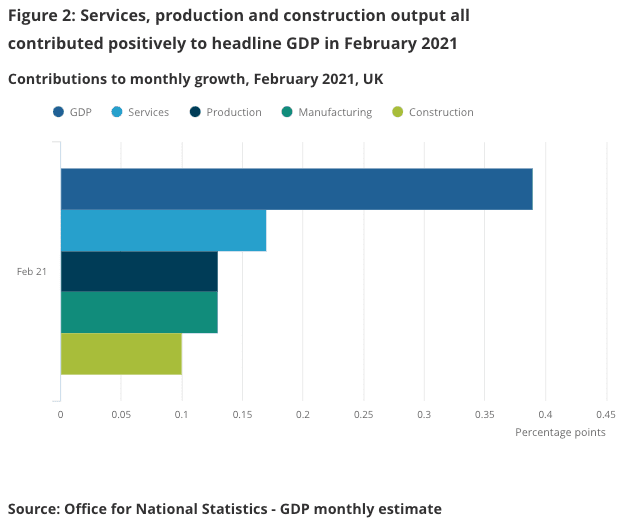 "Although it seems very likely that growth picked up further in March, GDP for Q1 appears likely to be down by around 2% from Q4 last year. Nevertheless, the acceleration through the quarter shows momentum heading into Q2 when restrictions are scheduled to be eased more significantly," says Rhys Herbert, an economist at Lloyds Bank.

Concerning the outlook, economists at Berenberg Bank say if real GDP remained stable at the February level in March it would imply a 2.1% quarter-on-quarter fall in the first quarter of 2021.

Pickering says this outcome is "less bad" than their already above-consensus call for a 2.5% contraction (consensus is -3.5%).

But because economic output would be recovering from a higher base, a less-bad-than-expected first quarter would also imply less of a bounce in the second quarter than Berenberg are currently expecting (+5.0% qoq).

"While the upside surprise may affect the profile of near-term economic activity, it would imply only a modest upside risk to our 2021 annual call of a 6.2% gain. However, with a less lost ground to recoup, the UK may now make a full recovery slightly sooner than we currently expect (Q2-2022)," says Pickering.

Berenberg are forecasting real GDP expansion of 6.2% in 2021 and 5.6% in 2022. "Thereafter, a strong global tailwind can help to offset the Brexit damage for a while and keep real GDP growth close to or even slightly above the post-Lehman average of 1.8%," says Pickering.

Economists at ING say they forecast a near-5% increase in second quarter GDP assuming the reopening continues to go to plan, allowing the economy is likely to reach its pre-virus size by mid-2022.

Samuel Tombs, UK Economist at Pantheon Macroeconomics says the reopening of schools in March will have boosted GDP directly, by lifting education output, and indirectly, by enabling more parents to resume working and by boosting healthcare output through the associated increase in Covid-19 testing.

He notes both Markit's PMI and the ONS’ Business Impact of Covid-19 survey point to faster growth in private-sector activity.

Accordingly, Pantheon Macroeconomics estimate UK GDP rose by about 2% month-to-month in March, helping to limit the quarter-on-quarter drop in Q1 to 1.5%.

"With the rapid rollout of vaccines enabling restrictions on economic activity to be lifted sustainably this time, we continue to look for a 5% quarter-on-quarter jump in GDP in Q2," says Tombs.