The hit to the UK economy in 2021 from the covid-19 crisis looks to be smaller than expected and a sizeable increase in savings by UK households means a strong rebound in growth will likely take place over coming months, even if the scale of that boost is being hotly contested by economists.

The size of the UK's economy as measured by Gross Domestic Product (GDP) shrank 7.3% in the final quarter of 2020 when compared to the same time a year prior, which is less than the -7.8% the market was expecting and has meant economists will have to raise their growth forecasts for 2021. 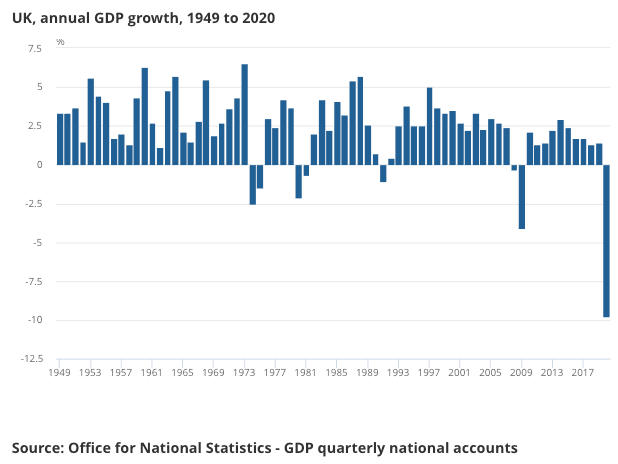 The figure announced is also a smaller decline than the -7.8% reported in previously published provisional data.

The economy actually grew 1.3% in the final quarter when compared to the third quarter of 2020, which is greater than the 1.0% the market was expecting.

"The upward revision to GDP in the second half of 2020 means the economy does not have quite as far to recover from the COVID-19 crisis. And Q4's high saving rate leaves plenty of scope for a rapid rebound in 2021, spurred and financed by consumers," says Ruth Gregory, Senior UK Economist at Capital Economics.

But, the big drop that occurred in the second quarter of 2020 - when the covid-19 panic was at its greatest - was actually deeper than previously estimated with the ONS saying the GDP drop in the April-June quarter is estimated to have been 19.5%, a downwards revision of 0.5 percentage points.

Looking ahead, the ingredients for a strong economic rebound over coming months will likely be driven by a spending of the pent up savings accrued by UK households during lockdown.

Over the year 2020, the household saving ratio rose sharply, reaching a record high of 16.3%, compared with 6.8% in 2019. Institutional economists and the Bank of England have said over recent months that the spending of pent up savings is likely to trigger a sizeable economic rebound over coming weeks as service-orientated businesses are allowed to reopen once more.

When looking at how the UK performed relative to other countries, the ONS say there are a number of ways of doing so.

Because national accounting is done differently in different countries it is hard to arrive at an absolute and decisive comparison.

The ONS have acknowledged the challenges and say it is useful to compare nominal and real estimates of GDP, as well as estimates excluding government expenditure. The main difference between nominal GDP and real GDP is the adjustment for inflation. Since nominal GDP is calculated using current prices, it does not require any adjustments for inflation.

The impact of whether we compare the nominal or real GDP of a country matters greatly for the UK: 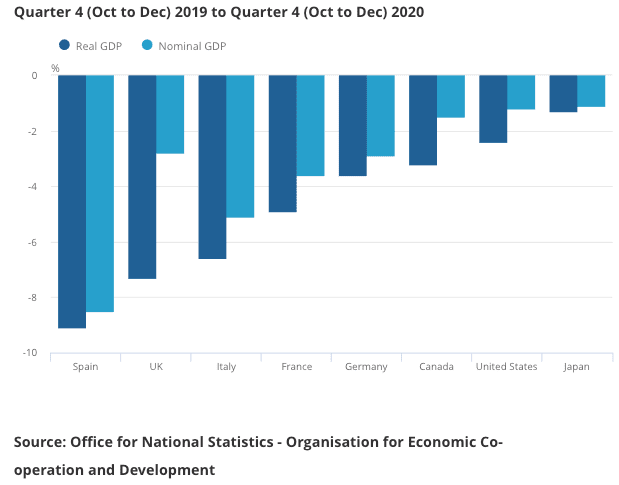 However, Samuel Tombs, UK Economist at Pantheon Macroeconomics, says the UK economy remained the hardest hit in the G7 by Covid-19 in the fourth quarter, with GDP still 7.3% below its peak.

He says this weakness cannot be attributed to how the ONS measures real government expenditure, which in Q4 actually rose 0.3% year-on-year.

Instead, household spending and exports are to blame: 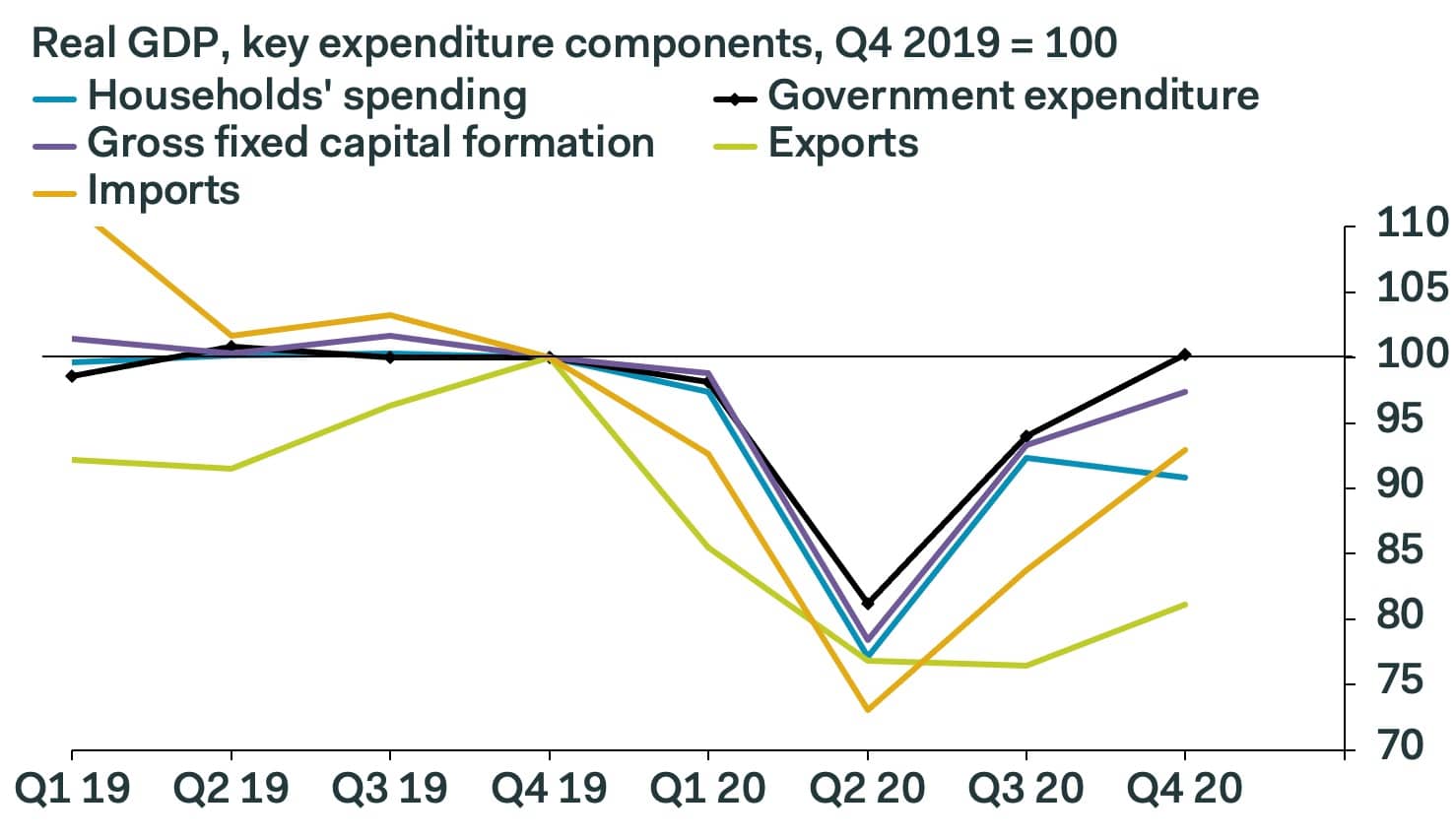 Tombs says a pronounced weakness in households’ spending largely is to blame for the underperformance; it was 9.2% below its peak, following a 1.7% quarter-on-quarter drop.

In addition, exports fell 18.9% year-on-year in the fourth quarter, despite the temporary support to orders from the approaching Brexit deadline.

The ONS reports real disposable incomes of UK households rose 0.7% year-over-year in the fourth quarter, highlighting the potential for spending to snap back, when businesses have fully reopened.

However, Tombs - who has ranked the most accurate forecaster of the UK economy in 2020 by Refinitiv - is doubtful that households will spend the cash that they have squirrelled away over the last year.

"Weakness in UK equity prices has meant that households’ total financial assets have risen merely at an average pace (the full Q4 balance sheet data will be published at 09:30). Households, therefore, likely will cling on to this cash, or top up their underperforming pensions, rather than spend it," says Tombs.

But Ruth Gregory at Capital Economics says she is optimistic that consumption will go from being the weakest sector of the economy to the strongest in 2021, as households return to saving the same share of their income as they did before the crisis.

"The upside risk is that households go further and spend some of the stocks of savings accumulated last year," says Gregory.

Investec are looking for the UK economy to rebound 7.3% in 2021, in part thanks to the spending of saved cash.

However, the 2021 forecast for 2021 is raised to 7.8% on a mechanical basis given the upgrades to the ONS data issued today.

"It is difficult to judge what proportion of pent-up savings will be spent, and when, but this does seems to be a source of an upside risk to growth over the next 12 months or so, particularly if the withdrawal of the furlough schemes fails to result in a big spike in unemployment," says Philip Shaw, an economist at Investec in London.