The UK's unemployment rate unexpectedly fell to 5.0% in January, down from 5.1% in December, suggesting businesses are increasingly optimistic on the economic outlook.

The result surprised markets that were expecting the unemployment rate to tick higher to 5.2%.

"Despite the tumultuous start to the year in the UK, the jobs market remained fairly stable, and if anything showed some modest signs of improvement through the first few weeks of 2021," says James Smith, Developed Markets Economist at ING.

"Many sectors are now tentatively getting back on their feet, and outside of consumer services employment has been improving," he adds.

The ONS reports the three month rolling measure of unemployment rose 147K in the three months to January, which is greater than the figure of 114K reported in December but less severe than economists had been expecting given the consensus was looking for -167K. 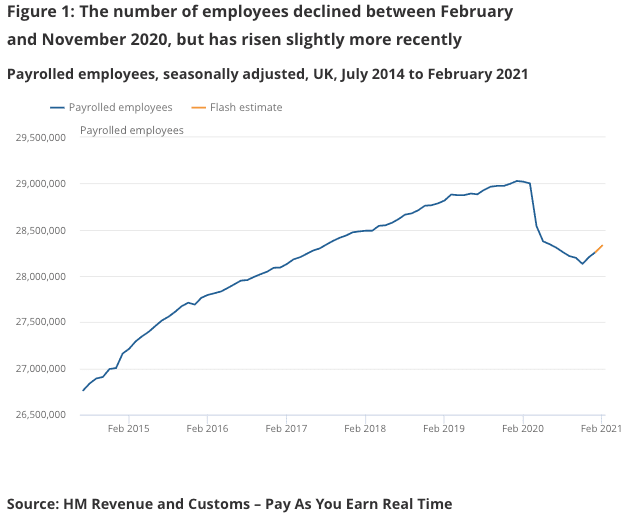 Most economists do however warn that UK unemployment will likely edge up through the course of the year, particularly once the furlough scheme finishes in September.

"How much depends on how many so-called viable jobs can be saved, and in principle, the fact that the scheme has been extended for a few months beyond the April/May reopening dates should give cash-strapped hospitality/service-sector firms time to get back on their feet," says Smith.

ING forecast the unemployment rate to rise to 6.0-6.5% later this year.

Economists at Capital Economics also expect the unemployment rate to rise further and peak at 6.0% by early 2022, but say that would be a much better result than most feared only a few months ago.

Indeed, Tony Wilson, Director of the Institute for Employment Studies, says payrolled employment has risen for three months in a row and it appears that unemployment may have peaked for now, at well under half of where many economists had feared it may have got to a year ago.

Samuel Tombs, UK Economist at Pantheon Macroeconomics, says the labour market no longer is deteriorating, as the furlough scheme is continuing to give firms a virtually cost-free way to retain staff that currently are surplus to requirements.

The fall in the LFS measure of employment reflects it moving into line with the PAYE measure of payroll employee numbers, which Pantheon Macroeconomics believe is providing a more accurate guide to the underlying trend.

He cites as evidence the number of redundancies proposed by firms which employ more than 20 people, and therefore have to submit an HR1 form to the Insolvency Service, was up only 9% year-over-year in January.

He also notes the employment balance of Markit’s composite PMI survey was only a whisker below the 50 no change level in February. Additionally, the number of job vacancies was 8% higher in the three months to February than in the previous three months, albeit still 27% below its level a year ago.

"As a result, it’s not out of the question that the unemployment rate will fall further over the next six months, given that struggling firms can furlough staff until the end of September, whereas growing firms will be recruiting," says Tombs.

However, the ending of furlough in September could yet result in an uptick in unemployment according to Pantheon Macroeconomics.

"It remains likely that the unemployment rate will rise when the furlough scheme ends; some sectors, such as retail, will be permanently smaller employers as a result of structural changes that have been accelerated by Covid-19. But with the scheme set to be unwound only when consumer demand has recovered, we are hopeful that the unemployment rate will peak in Q4 no higher than 5.8%," says Tombs.

This is an improvement on the position in summer 2020 when vacancies were down by nearly 60% year on year, but the rate of improvement has slowed in the past few months.

The key labour market statistics at a glance:

- 68,000 more people were in payrolled employment in February 2021, when compared with January 2021; this is the third consecutive monthly increase.

- The redundancy rate, in the three months to January 2021, was estimated at 11.0 people per thousand employees.