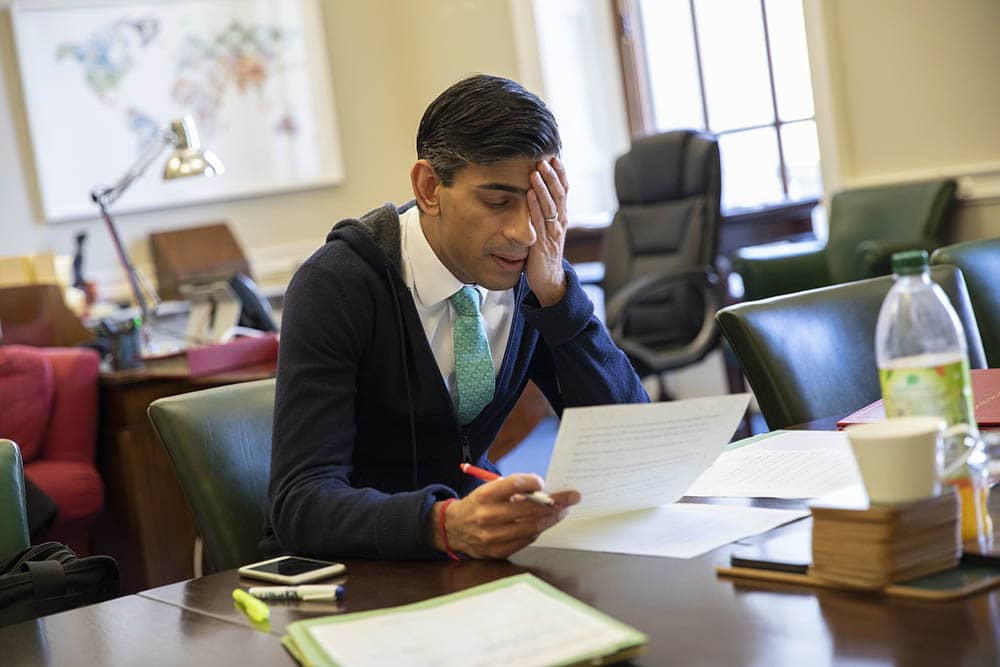 Concerns have been raised by businesses and economists that the decision to raise taxes on businesses will deliver a hit to sentiment that in turn lowers investment in the UK at a time when it is most needed.

"Beyond this year and next, fiscal policy will become a considerable headwind to the economic outlook. In what was the biggest tax raising budget since 1993, the UK's tax take is now poised to hit close to 40% of national income," says Sanjay Raja, Economist at Deutsche Bank.

A firm of merger & acquisition advisors in London says the UK has seen a sharp rise in M&A activity since a Brexit deal was signed in December, but this could now cool following the announcement of a corporation tax hike by the Government in the 2021 budget.

Corporation tax will rise from 19% to 25% after 2023 for profits over £50K and according to Theta Global Advisors international investor appetite for UK companies will likely cool as the looming tax rises reduce UK corporate profitability.

They say reduced net profits will likely make UK companies less attractive to prospective buyers who may otherwise have taken the final step to agree a buyout.

Chris Biggs, Partner at Theta Global Advisors says the corporation tax rise does come as a concern for the market in general, "especially for foreign investors or buyers, for whom it is now less attractive to acquire UK firms".

"The knock-on effect of a depressed deals market will be significant," he adds. 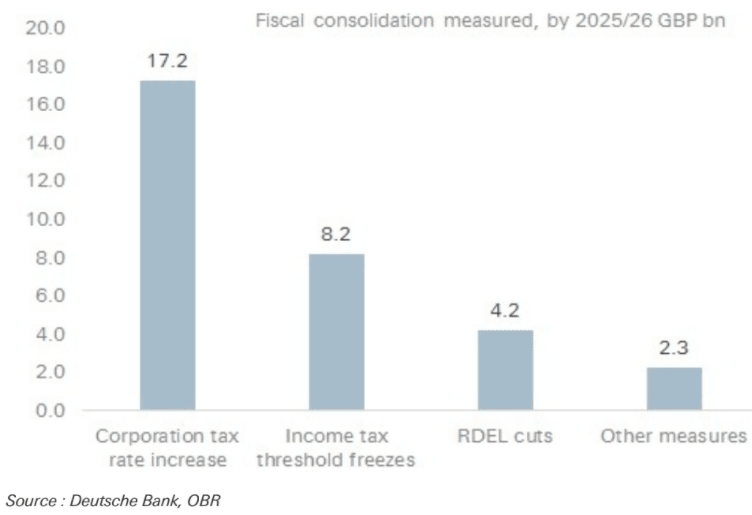 Above: Where is the planned £30BN in fiscal consolidation coming from? Image courtesy of Deutsche Bank.

Data from Refinitiv indicates that the value of UK firms sold to overseas buyers is the highest on record for this period.

The year prior to the Brexit deal agreement saw a depressed market in M&As as investors sat on their hands awaiting clarity as to what the future UK and EU relationship would look like, this uncertainty was only compounded by the covid crisis.

IW Capital - a business investment consultancy - says there seems to be too much of a focus at the Treasury on taxing profits in order to make up for spending.

"There is a clear sentiment for growth among business owner, but this is now met with income and corporation tax rises. The incentive to grow is now heavily burdened and this will furthermore impact future entrepreneurialism here in the UK," says Luke Davis, CEO of IW Capital.

There is a growing concern among business owners that rises in corporation tax and income tax, announced in the budget, could further hinder the nation’s economic recovery post-Covid before it has even started. 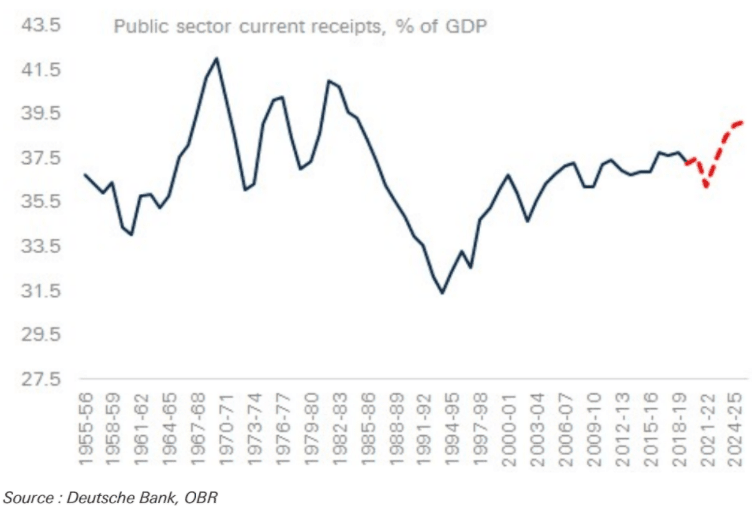 Above: The UK's tax take will be the highest it has been since early 80s - image courtesy of Deutsche Bank.

Davis says creating an eco-system for businesses to thrive, grow and hire more workers is a sure fire way to increase tax receipts in the long run and while immediate tax increases give an immediate result, it is often lower taxes that see long-term success.

"While we also saw a number of incentives to invest here in the UK announced yesterday, the increases we are now seeing around both corporation and income tax could in fact decrease our appetite to invest and undermine this push towards investment, which is meant to be the main focus," says Davis.

According to analysis conducted by Deutsche Bank, the scale of the fiscal consolidation that will take place beyond 2022 amounts to roughly £30BN by the middle of the decade.

Much of this (£20BN) will come from the Chancellor's corporation tax hike to 25% - assuming businesses don't find creative ways of avoiding the rise.

Stealth taxes, from freezes to income tax and capital gains tax thresholds, will add another £5BN according to Deutsche Bank.

"And not to be ignored is the more than £15BN in core department cuts pencilled in by 2025/26 since the last budget.

"The Treasury's own distribution analysis highlights that planned spending cuts and tax rises will hurt 70% of households. We are, for all intents and purposes, shifting towards a different form of austerity," says Raja.