"After four decades of declining inflation, the tide is turning in the advanced world. Several cyclical and longer-term structural factors suggest that underlying inflation will rise in the coming years," says Holger Schmieding, Chief Economist at Berenberg Bank.

The prediction comes on the day that the UK reports prices fell in January amidst an ongoing lockdown that has ensured economic activity and consumer patterns are unusually subdued.

The ONS reports CPI inflation for the UK came in at -0.2% month on month in January, down on December's 0.3%, but the figure was above the -0.4% the market was expecting.

CPI inflation rose 0.7% year on year in January, which is above December's figure of 0.6% and above the consensus expectation for a reading of 0.6%.

The main contributions to the downside on UK inflation data were falling clothing and footwear prices.

However, upside pressures came from furniture and household goods, restaurants and hotels, food, and transport. 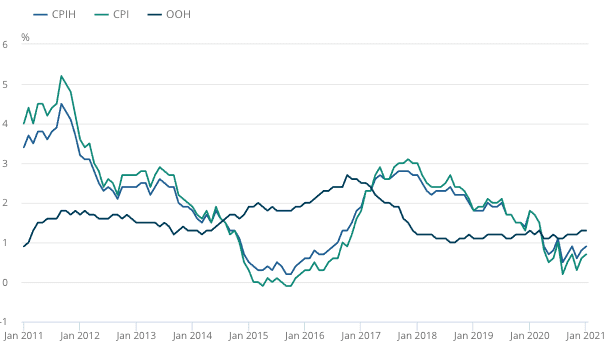 Given the UK is was in a lockdown during this period with restaurants and hotels being closed, the base from which such data could be sampled was substantially reduced.

The market impact of the numbers was marginal given the forward-looking nature of investors who will already be eyeing the reopening of the economy in coming months, and what the new landscape will mean for prices.

Pantheon Macroeconomics say CPI inflation likely will edge up in February and March, as the recent surge in oil prices is passed on swiftly to motorists.

It is expected to rise to 1.8% in April, largely due to the comparative effect of the collapse in oil prices a year earlier that will give a technical nudge to the data.

Price rises around this time are also likely to stem from a 9% increase in the default tariff cap for electricity and natural gas prices.

"What’s more, recent increases in global agricultural commodity prices point to scope for food CPI inflation to rebound to about 3% by the end of this year," says Tombs.

Pantheon Macroeconomics are forecasting a rebound in service sector inflation, triggered by higher-than-usual demand once virus risks are low.

"This year’s weight changes will amplify the impact on the headline rate of falling goods prices and muffle the boost from any pick-up in services," says Tombs.

"Accordingly, the period of above-target CPI inflation that we expect towards the end of this year will be brief and won’t distract the MPC, which will remain focussed on the lingering weakness of core inflation," he adds. 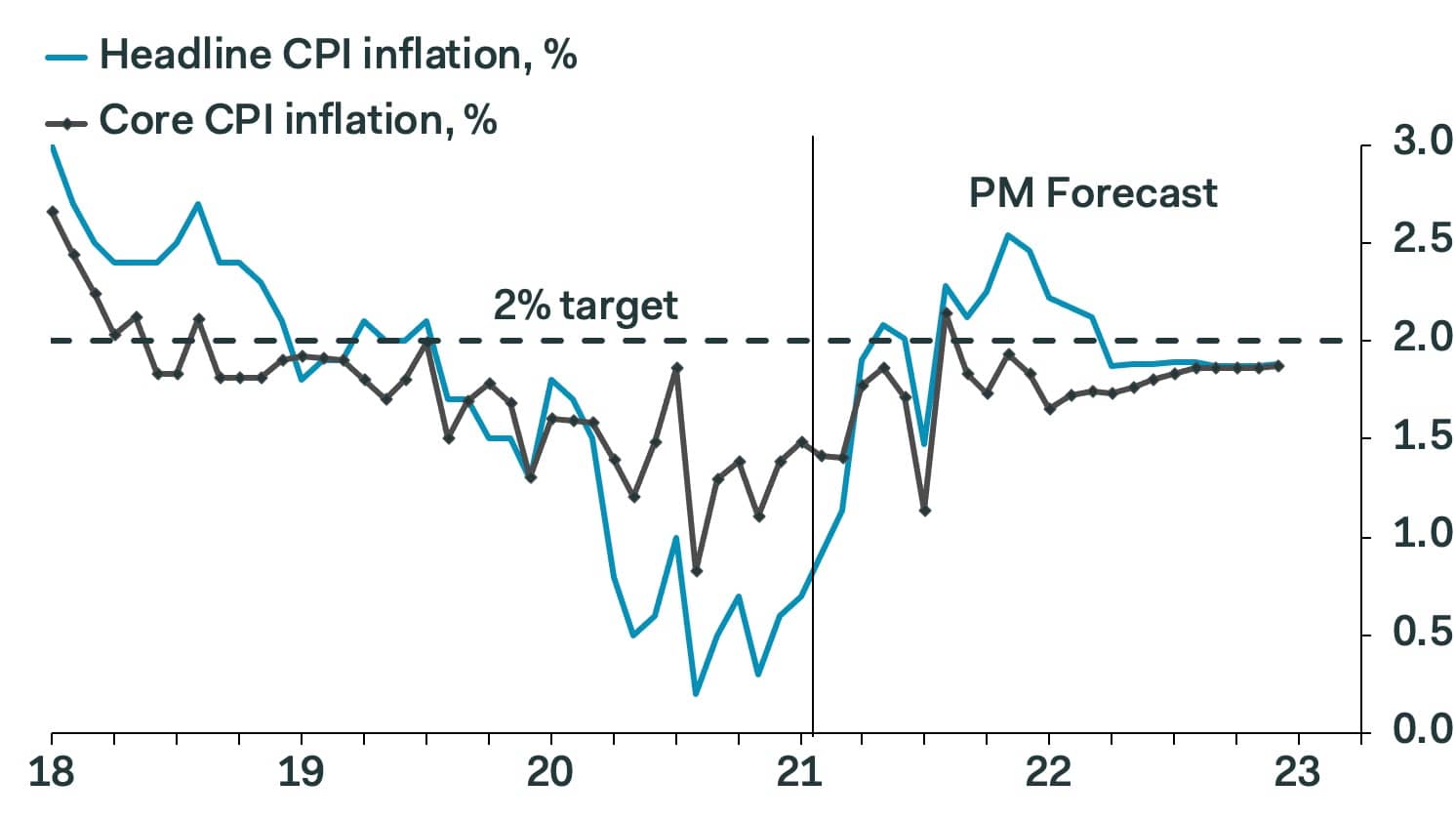 The market's expectations for higher prices have started to rise of late, a development highlighted by the rise in the yield paid on longer-term government debt. This is a typical development that occurs when investors demand more compensation for holding bonds if they believe the value of those assets will be eroded by higher inflation in the future.

Indeed, for markets, rising inflation expectations will be a key focus for investors over coming months as rising inflation could well prompt central banks to withdraw the liquidity stimulus that has been a key driver of booming stock markets.

"At the turn of the year investors rushed to buy protection against rising inflation. Measures of inflation expectations in advanced economies have risen sharply to their highest level for five years," says Innes McFee, Chief Global Economist at Oxford Economics. 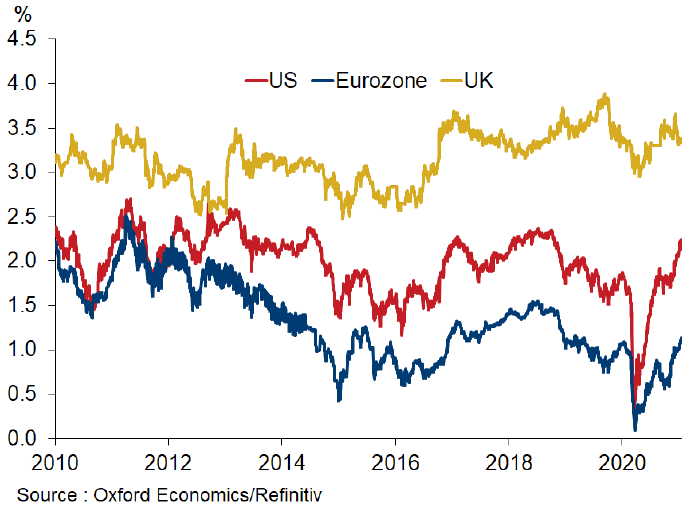 Above: The cost of protecting against inflation is rising, showing inflation expectations are rising. The chart shows 5-year inflation swaps, image courtesy of Oxford Economics.

"A sustained rise in inflation beyond levels that central banks are inclined to tolerate would force them to step firmly on the brakes eventually. High financing costs and the subsequent plunge in
economic growth would be a recipe for a major selloff in equity markets," says Schmieding.

Berenberg Bank say they expect inflation to rise back to levels consistent with the 'old normal' and a catastrophic rise in prices as witnessed in advanced economies during the 1970s will be avoided.

"The easing of economically damaging virus restrictions over the course of spring and summer in the U.S. and Europe should herald a rebound of core inflation in both regions," says Schmieding.

But in the UK, Berenberg predict output will take longer to recover to its pre-pandemic peak (Q2 2022 in the UK versus Q1 2021 in the US). One reason is that the rise in the Pound exchange rate will likely weigh on import prices.

UK core inflation is forecast to likely reach the Bank of England's 2.0% target by early 2022 on a sustained basis.

But money market indicators are suggesting to Berenberg that market expectations are consistent with price rise of around 2.4% in five years' time which is above the 2.4% target set at the Bank of England.