Inflation is back on the radar for investors who worry that the response by governments and central banks to the covid-19 crisis is storing up higher prices in coming months and years.

For investors the impact of stubbornly high inflation on fixed income and stock market holdings could be a major risk on the horizon, particularly for those who who have only ever known low-inflation investment environments.

A look at investors' gauge of inflation expectations shows a marked pick up in 5-year inflation swaps in 2021, suggesting more investors are now looking to buy up hedges to protect their assets against higher prices in the future.

Above: The cost of protecting against inflation is rising, showing inflation expectations are rising. The chart shows 5-year inflation swaps, image courtesy of Oxford Economics.

"At the turn of the year investors rushed to buy protection against rising inflation. Measures of inflation expectations in advanced economies have risen sharply to their highest level for five years," says McFee.

Buying protection against inflation reflects a fear amongst investors that the return on their investments will be watered down by rising prices, prompting them to buy insurance against such an outcome. 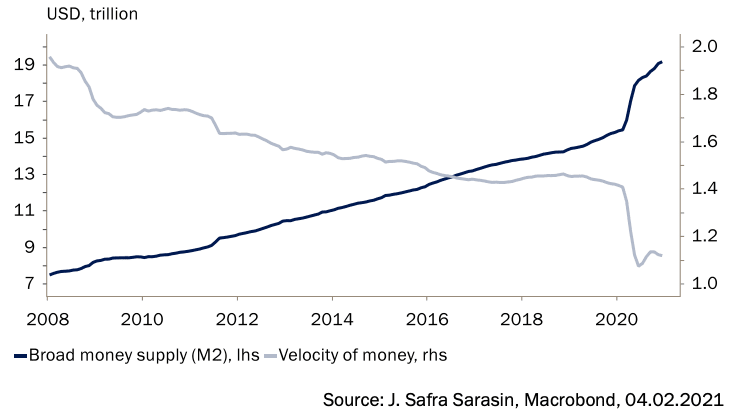 Above: Money supply has surged in the U.S., but velocity has dropped. Image courtesy of J. Safra Sarasin. 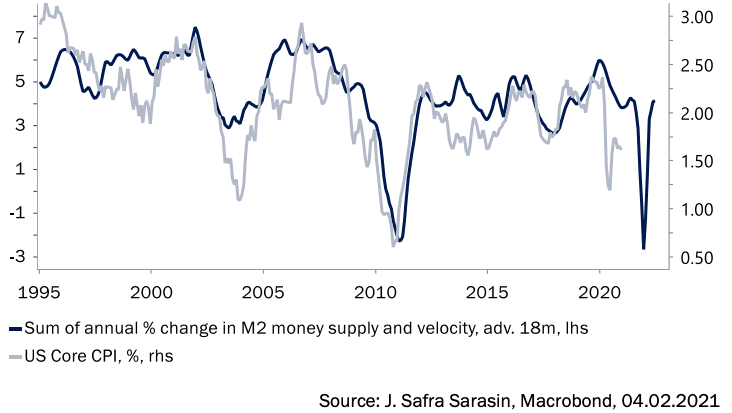 Above: A pick-up in money velocity should lead to higher inflation. Image courtesy of J. Safra Sarasin.

"After experiencing an almost perfect combination of falling real rates and rising macro momentum over recent months, the road ahead for global equities has narrowed," says Olszyna-Marzys.

Researchers at Oxford Economics say sustained higher inflation could lead to higher interest rates at central banks, which could in turn lead to the yield paid on long-term bonds rise notably.

"Should we see a period of sustained high inflation this would spell trouble for investors," says McFee.

Investors will demand a higher return on their bond holdings that cover long durations as a compensation for the higher inflation they expect down the road.

But, this in turn means the cost of borrowing for governments and corporates rises, placing potential constraints on economic output.

Rising yields could therefore prompt investors to another look at equity market levels, particularly given suspicions amongst many investors and analysts that valuations are potentially too high and froth is developing in some stocks and sectors. 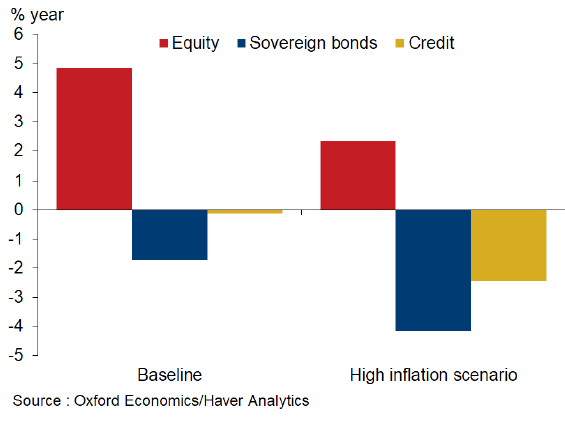 "The combination of a higher discount rate that prompts a reassessment of lofty equity valuations in some markets (notably the US), and the direct adverse inflation impact would hurt equity returns," says McFee.

But will higher inflation be enduring?

Many economists we follow say inflation will likely rise in 2021, largely driven by one-off factors, such as rising fuel prices linked to the surge in oil prices and the rise in other commodity prices seen over recent days and months.

However, there is a divergence of opinion on whether these prices rises prove to be enduring and last beyond 2021 and early 2022.

For investors, "the real question is whether this episode will be a one-off price level adjustment or whether we should expect a more sustained increase in inflation over the longer term," says J. Safra Sarasin's Olszyna-Marzys.

J. Safra Sarasin say surveys and professional forecasts suggest that the pandemic has increased uncertainty about where inflation might eventually lie.

But looking into 2022 and beyond they warn U.S. core PCE inflation is more likely to be above 2% than at any time in the last 20 years, signalling a pervasive level of inflation.

The UK could also be set for an enduring legacy of higher inflation.

"Our view that the recovery from the COVID-19 pandemic will be quicker and more complete than most forecasters expect suggests that the economic legacy of the crisis may not be a permanently smaller economy but instead higher inflation and bigger public deficits," says Ruth Gregory, Senior UK Economist at Capital Economics. 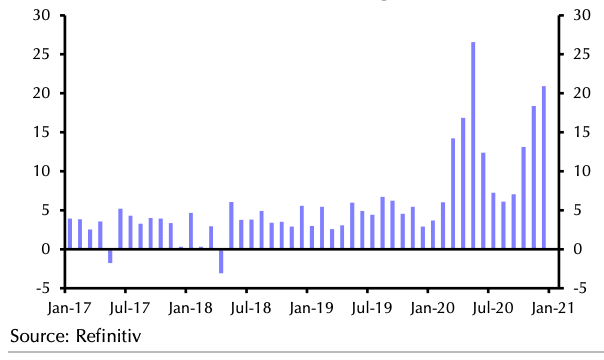 Capital Economics say that any sustained inflation beyond 2021 will be a long-term phenomenon that has a multi-year horizon.

The reason for this is that government spending will likely remain elevated, and deficits will only be sustainable if they are kept manageable by inflation.

"The government might judge that higher inflation is a price worth paying to keep running deficits, prompting an institutional slide towards accepting higher inflation," says Gregory.

This spells high long-term inflation prospects, and Capital Economics say it could become the norm in the late 2020s and 2030s that UK inflation resides persistently above 2% and the budget deficit at 4-5% of GDP.

But not all are yet convinced that a regime change in inflation looms.

Oxford Economics say that while there are upside risks to inflation over coming months and years, their base-case view is that the old economic relationships that gave us 25 years of soft inflation will ultimately reassert themselves.

"Our inflation baseline is benign. We expect the rise in inflation this year will be transitory, as the dampening forces of weak demand and demographics reassert themselves," says McFee.

Although they acknowledge they could be wrong Oxford Economics say ultimately the level of demand will remain low and secular forces will continue to depress price growth.

J. Safra Sarasin's Olszyna-Marzys says there are three reasons U.S. inflation levels are likely to be high on a sustained basis.

The reasons are structural in nature and can therefore be applied to other advanced economies such as the UK and Eurozone.

1) Monetary and fiscal support has been unprecedented.

"A quarter of the existing money stock was created in 2020. This is very different to what happened after the Global Financial Crisis, when the expansion of the Fed’s balance sheet boosted banks’ reserves, but only led to a modest increase in money supply."

2) Policy support will only be phased out very gradually.

"Congress legislated around $4tn worth of fiscal help in 2020, and another $1.5-1.7tn fiscal relief bill is likely to go through shortly. Once this is done, the Biden administration will focus on a very large ‘recovery’ bill that will increase public spending on infrastructure over the next decade. In short, output gaps should close more rapidly than they would have done otherwise."

3) Ageing in advanced economies and China is likely to lead to labour shortages and boost workers’ bargaining power.

"The working age population in advanced economies and China is falling. The ageing of these societies means that an increasing number of people will have to work in the care industry, creating labour shortages and boosting the bargaining power of workers in other industries." 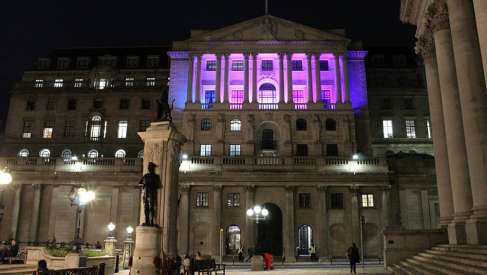 The Bank of England will delay delivering a first interest rate rise from December to February in response to Omicron, but will still be quick to push them higher in the first half of 2022 says Barclays.