The Consumer Prices Index (CPI) measure of inflation in the UK was 0.7% higher year-on-year in October 2020, up from 0.5% in September and a beat on consensus market expectations for a reading of 0.60%.

According to the Office for National Statistics, clothing, food and furniture, furnishings and carpets made the largest upward contributions to price rises in the latest set of statistics.

Prices were however unchanged on a month-to-month basis between September and October, but this was still ahead of analyst expectations for a reading of -0.10% to be recorded, although it was lower than the previous month's reading of 0.40%.

Inflation is traditionally a the single most important economic consideration for the Bank of England when it comes to setting interest rates, and news that inflation is stronger than expected might have in the past lead to expectations for interest rate rises at the Bank. However, with the covid-19 crisis having gutted capacity in the economy economists say the latest data are unlikely to move the dial at Threadneedle Street. 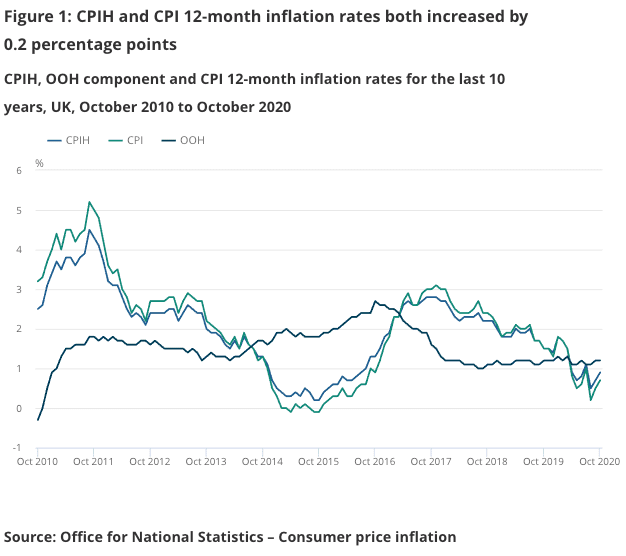 CPI inflation is forecast by the Bank of England to rise to 0.9% in March 2021, with projections assuming that developments related to Covid-19 will weigh on spending in the near term, although to a lesser extent than earlier in the year.

"Despite the rise in October inflation, the headline rate of CPI continues to remain well below the Bank of England’s 2% target as mandated to it by the UK government. In fact, since April, it has been consistently at least one percentage point lower than that level, highlighting the general weak undertone to underlying UK inflation currently," says Nikesh Sawjani, UK Economist at Lloyds Bank.

"The 0.7% outturn in the targeted inflation rate is unlikely to shift the dial much on the likely path for UK monetary policy over the months ahead. It is above the 0.5% the Bank had pencilled in for October. Even so, it remains at a relatively subdued level and the more critical driver of Bank of England policy over the months ahead will be the path the UK economy takes through the pandemic and Brexit also," says Victoria Clarke, Economist at Investec.

Clarke says it will be the evolution of Covid-19 restrictions and Brexit forces which will guide the Bank of England's hand at its December meeting.

Concerning the outlook for inflation, economists at PwC say the current UK-wide lockdowns will sap price growth from the economy into year-end.

"The gradual increases in consumer prices could be temporarily cut short next month, as England’s second national lockdown in November restricts activity and demand for things like fuel," says Hannah Audino, economist at PwC.

The lead up to Christmas could however provide some support to prices says Audino.

Lloyds Bank's Sawjani says the outlook is still only consistent with a gradual uptrend, with the headline rate of CPI likely to remain below 1% until the first quarter of 2021.

"After which, we expect the temporary cut in VAT for the hospitality sector to unwind and push CPI inflation back above the 1% mark, but for it to remain well below the 2% target until around the end of 2022/early 2023," says Sawjani.