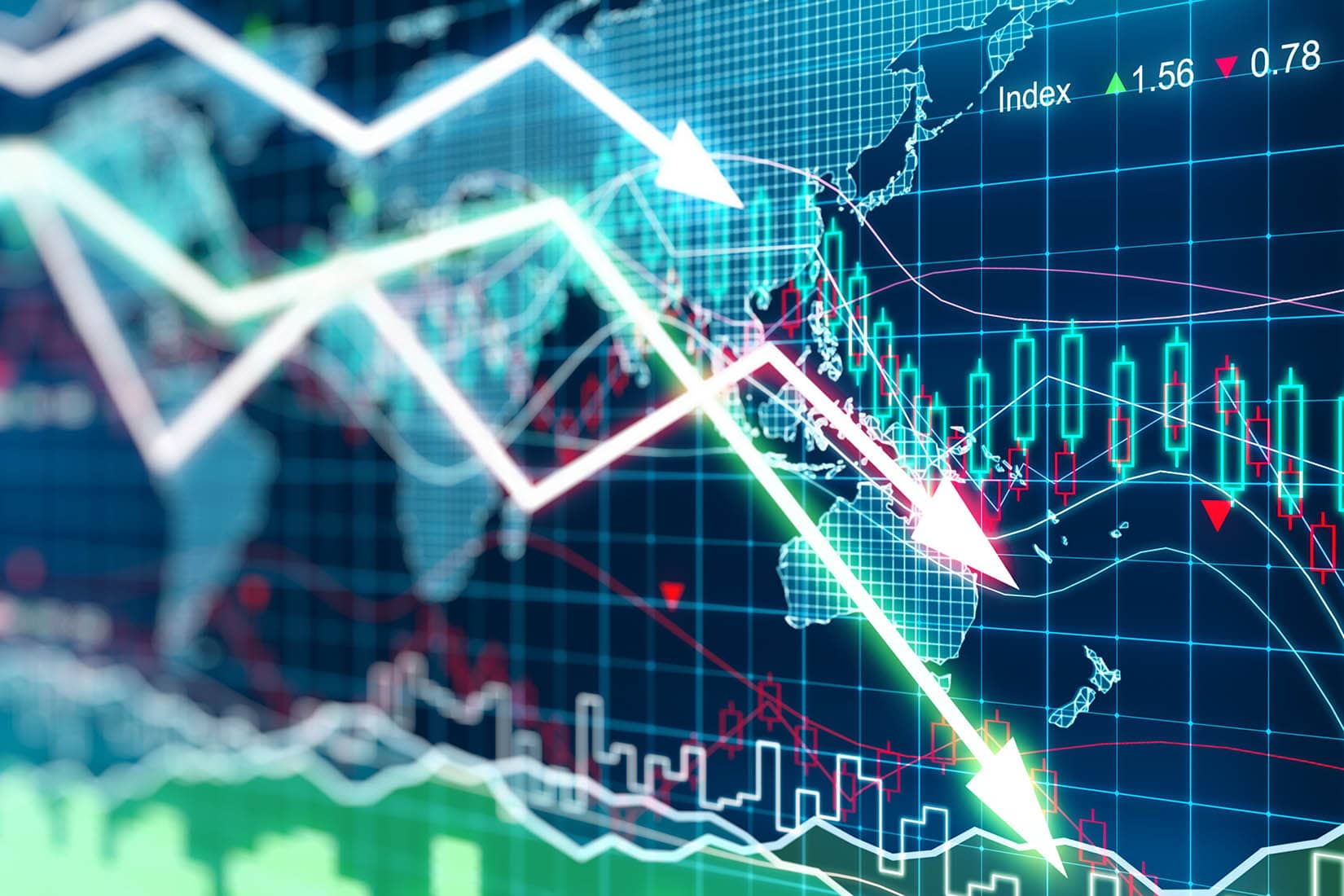 Althea Spinozzi, Fixed Income Specialist at Saxo Bank believes that the worst sovereigns in terms of risk and reward are the ones offered by the sub-Saharan region together with Hungary, Poland, Turkey, Argentina, Brazil and Chile. Good opportunities can still be found in Russia, India, Indonesia and the Czech Republic.

Years of overly accommodative monetary policies in western economies have messed up the financial system and played psychological games on investors’ minds.

Asset valuations have been rising everywhere, and investors became greedy and demanded more yield. This pushed them to look for assets that were offering less quality but higher returns.

Many, have put their Indiana Jones hat on and adventured beyond the developed world to discover treasures in the emerging markets. In these countries, corporate and sovereign debt looked cheap and with better growth perspectives. In reality, what was happening is that investors were putting their money to work in an increasingly bigger debt bubble, which now is on the brink of collapse.

In order to accommodate foreign demand, emerging markets started to issue hard currency debt. Even though at the time this looked to be a great idea, what happened is that debt became more expensive in terms of local currency as the U.S. dollar strengthened in the past six years. Now EMs find themselves in an unsustainable debt trap: they are forced to refinance and issue larger amounts of debt to service old debt. In the meantime, investors flocked to EM new bond issuances, accepting lower and lower yields.

Since the volatility provoked by the Covid-19 pandemic, assets from the emerging markets have rebounded. As you can see from the graph below, EM bond yields have fallen to lower levels compared to the beginning of the year. The problem is that central banks' accommodative policies contributed to pushing yields lower, making EM sovereigns incredibly expensive.

Hence, we believe that it has arrived the time to stop and reconsider EM risk carefully. 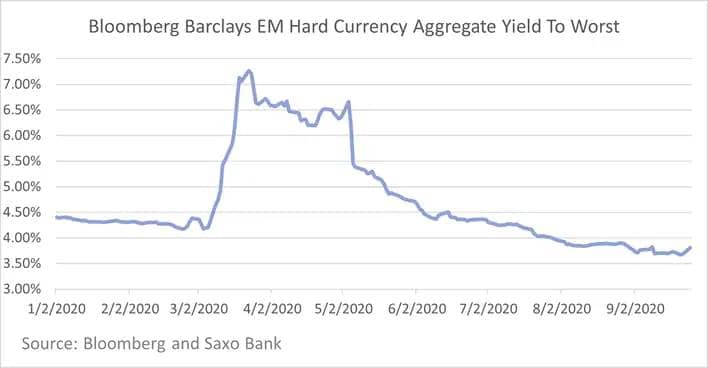 Since March, we have seen many emerging markets engaging in accommodative monetary policies. Even though in the short term money supply can help to limit volatility and support asset prices, in the long term it can be greatly inflationary and destabilizing. Indeed, debt monetization raises public debt burden which, without a strong fiscal commitment, will turn into an unstoppable devaluation of assets.

The problem with engaging in accommodative monetary policies in these countries is that their currency is weak and more volatile compared to developed economies.

Hence, they are vulnerable to crisis and credit crunches because capital flees towards more stable currencies such as the U.S. dollar, euro, Japanese Yen and the Swiss franc. Besides, by increasing the money supply local central banks weaken their currencies. In normal circumstances, this means that a country's trade balance would see more exports and fewer imports.

Because the coronavirus pandemic has created a shock both on the supply and demand side, this time around central banks cannot rely on this theory. What happens is that the foreign currency debt they are sitting on gets bigger and bigger.

In the graph below, you will find the CDS, the debt-to-GDP ratio and the yearly change of money supply (M1) in 20 different EM countries. A deplorable picture comes out of it.

All countries have eased monetary policies, but some have been eager to do that. We expect distress where monetary expansion and debt-to-GDP ratio is high. CDS spreads instead indicate the level of risk perceived by the market. Considering all these three metrics, we find out that the Czech Republic, Indonesia and Russia are the least leveraged economies with higher investors’ confidence. Hence, they are capable of withstanding a liquidity squeeze better than others. 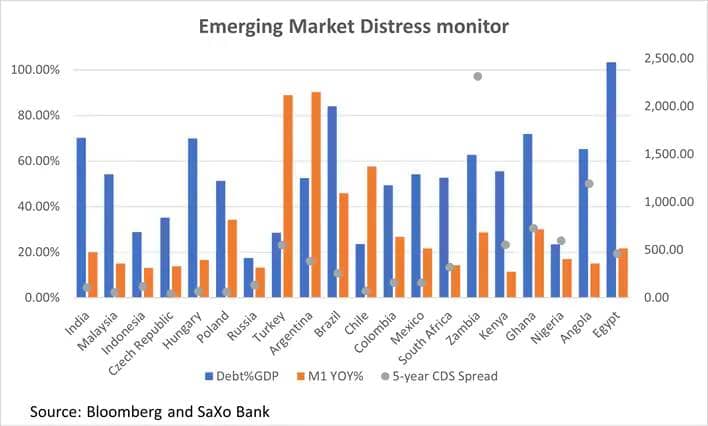 This year has seen a record number of sovereign defaults including Lebanon, Ecuador and Argentina. Zambia is the last country that seems to be heading towards a default as it asked its creditors to accept delayed interest payments. The ridiculous thing is that as the country was asking for relief, the ministry of finance unveiled the 2021 national budget, which presents an improvement in the deficit. Nonetheless, that deficit needs to be financed through external debt.

All of a sudden, we are seeing other countries such as Angola and Chad asking for debt relief in the region. Kenya may be forced to seek relief under the G20 debt service suspension initiative as debt burden rose sharply amid poor domestic economic and exporting sector performance.

While these countries blame poor economic performances on the coronavirus pandemic, it is important to note that they were in dire economic conditions before the pandemic. However, they were managing to get by, service their debt and get more and more borrowings. The Covid-19 pandemic didn't create anything new; it just added pressure to already deep economic problems.

We believe that concerns regarding the biggest real estate company in China are a credit negative for all the EM world. The company sits on $120bn debt which, if it starts to tumble, could cause a liquidity squeeze in the Chinese credit market. If that were the case, it would quickly leak to other developing markets, especially to those that are heavily borrowing from China. It will not come to a surprise to know that sub-Saharan countries are deeply indebted with the People’s Republic of China as well as some Latin American countries. Suppose the Chinese government needs to solve a liquidity squeeze caused by a large default such as the one of Evergrande. In that case, it may have its hands tied when it comes to supporting the countries it has been lending to in the past.

As per the graph below, the distribution of emerging market sovereign debt is concentrated in the next three to four years. 2021 is the year where will see the most redemptions. Refinancing of sovereign debt is not only crucial for emerging markets’ economies, but it is crucial even for their corporates. As a matter of facts, if the cost of funding rises for sovereigns, the one for corporates will rise accordingly pushing many companies into a liquidity trap.

Some EM sovereigns still look good in terms of risk-reward

We believe that good opportunities can be found in Russia, Indonesia, Czech Republic, Mexico and India. Their economies are less geared, and their central banks have not engaged in overly aggressive monetary policies. This gives them more leeway in case of another economic shock. Plus, their sovereigns offer an interesting pick up over Treasuries. As the table below shows, U.S. dollar sovereigns or quasi-sovereigns with ten years maturities pay more than 2% in Indonesia. India, Russia, Mexico and the Czech Republic pay more than 3% in yield for similar maturities.

On the other hand, we believe that Hungary, Poland, Turkey, Argentina, Brazil, Chile and the sub-Saharan region present too many risks for the yield that they offer. 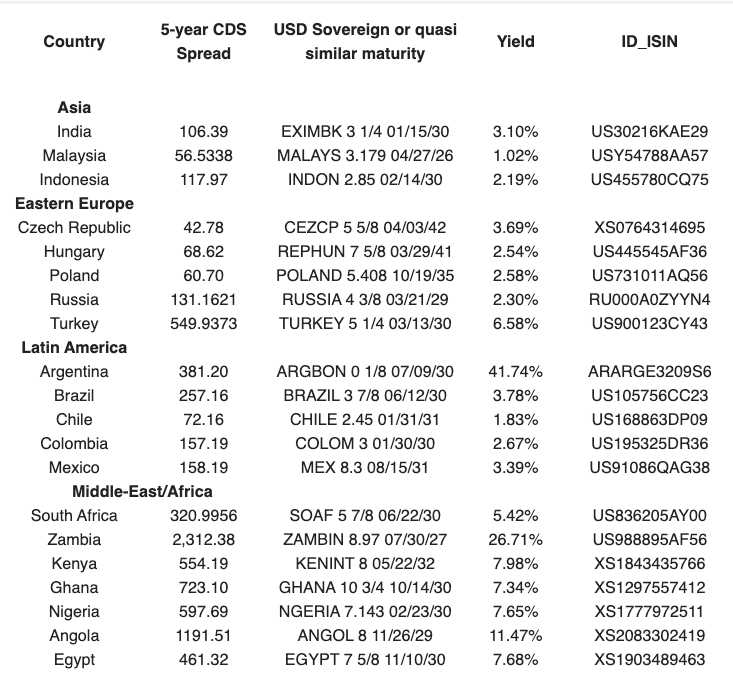