The UK economy contracted by less than was previously thought last quarter, the Office for National Statistics (ONS) said Wednesday but with government withdrawing financial support while tightening restrictions on activity, the data offers little consolation to a bruised economy ahead of a likely bleak winter.

GDP fell -19.8% last quarter, less than the -20.4% initially declared following revisions to the decline in business investment that offset downgrades to consumer spending and government consumptions.

“This is the largest quarterly contraction in the UK economy since quarterly records began in 1955,” the ONS says. “Compared with the same quarter a year ago, the UK economy fell by a revised 21.5%. UK GDP is estimated to have increased by 1.3% between 2018 and 2019; this was revised down 0.2 percentage points from the previous estimate."

Business investment still fell by -26.5% on the quarter, which remains the largest fall of any one category although it was shallower than the -31.4% decline initially reported by the ONS. Meanwhile, consumer spending declined -23.6% and government consumption fell -14.6%. 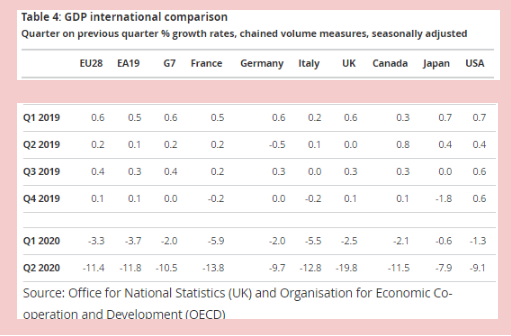 On a less dire note the fall in economy-eating imports was so much larger than the second quarter’s decline in exports that ‘net trade’ is estimated to have softened the blow of the pandemic by adding some 3.5% to GDP.

Meanwhile, the household savings rate rose to a record high of 29.1%, from 9.6% in the first quarter, likely owing to restrictions on activity that prevented spending and uncertainty about the economic outlook.

“None of this changes the big picture that the collapse in activity left the economy 21.8% smaller than in Q4,” says Ruth Gregory at Capital Economics. “Backward-looking news is less important than the timelier data which has suggested the rapid rebound phase has already come to an end in September. The renewed COVID-19 restrictions will probably mean that GDP stagnates in Q4, leaving economic activity marooned 5.5% short of its pre-crisis level.” 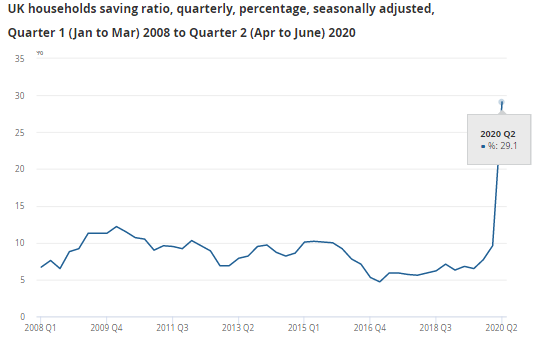 Wednesday’s data is a meaningful revision but still pales into insignificance when compared with the scale of the crater created by government efforts to contain the coronavirus, and it was also partially offset by a downgrade to the earlier estimate of first-quarter contraction.

First quarter GDP growth was -2.5%, the ONS said Wednesday, downgrading its earlier estimate of a -2.2% fall. Furthermore, the recovery that began in the third quarter is now thought to have stalled and with the government withdrawing support for companies and households, as well as tightening restrictions, Capital Economics’ Gregory says a fresh contraction cannot be ruled out.

“Households’ spending appears to have rebounded strongly in Q3, as they spent some of the “enforced” savings,” says Samuel Tombs, chief UK economist at Pantheon Macroeconomics. “A high saving rate and a decline in labour income likely will ensure that households’ spending, and indeed overall GDP, are approximately 5% below their pre-Covid level in the final quarter of this year.” 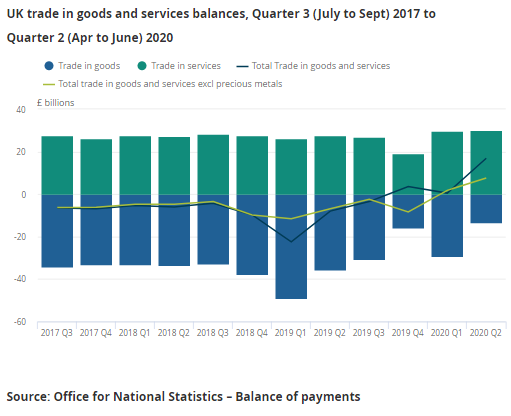 Separately, the ONS also said the current account deficit, long described by some policymakers as the UK’s achilles heel, came in at just -£2.1 billion for the second quarter. That’s a significant fall from the -£20.8 billion seen in the first quarter and the narrowest deficit since the opening quarter of 2011.

After adjusting for changes in non-monetary gold and other precious metals, the ‘underlying UK current account deficit’fell to -£12.1 billion. The ONS said this is equivalent to 2.5% of GDP

The smaller current account deficit reflects a lesser trade imbalance after exports fell to their lowest since the immediate aftermath of the Brexit referendum, in what would have been an economy-crushing fall if not for even larger declines for GDP-reducing imports, which fell to their lowest since the third quarter of 2010. This was balm for a bruised economy, which was aided further by reduced payments to overseas lenders.

“The small current account deficit in Q2 largely can be attributed to a collapse in the value of imports, in response to the fall in oil prices, temporary supply chain disruptions due to Covid-19, and a decline in outbound tourism, Pantheon’s Tombs says. “The small current account deficit, however, does mean that sterling is less vulnerable than it was last year to a sudden drying up of financial inflows if an adverse shock, like a no-deal Brexit, materialises.” 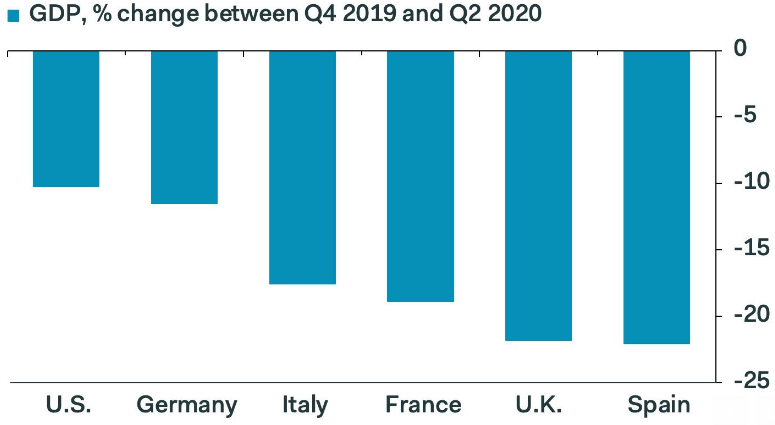 Despite the revisions to GDP and improved deficits, the economy remains in a grave situation that could get worse still over the coming months, not least of all because of continued government imposition.

Coronavirus infections declared by the government have risen sharply since mid-August, setting new records and leading to localised ‘lockdown’ in the north of the country as well as early closure for hospitality venues. Meanwhile, the threat of more restrictions looms large over the winter outlook.

Caroline Lucas, former co-leader of the Green Party and a sitting member of parliament, offered insight Wednesday on what might be behind some of the recent frightening coronavirus statistics in an op-ed for Metro.

“Boris Johnson faces a possible defeat in his bid to extend emergency powers related to the pandemic, as members of his own party threaten to vote against him should he not agree to give further time to lawmakers to review restrictions imposed under these powers. Boris Johnson continues to have to split his focus between the covid-19 response and Brexit, with the latest overture by the UK negotiation team not being accepted by the EU. Time is ticking down for an agreement,” says Siobhan Redford, an economist at Rand Merchant Bank.

Above: Hospital admissions in the United Kingdom. Source: UK Government.