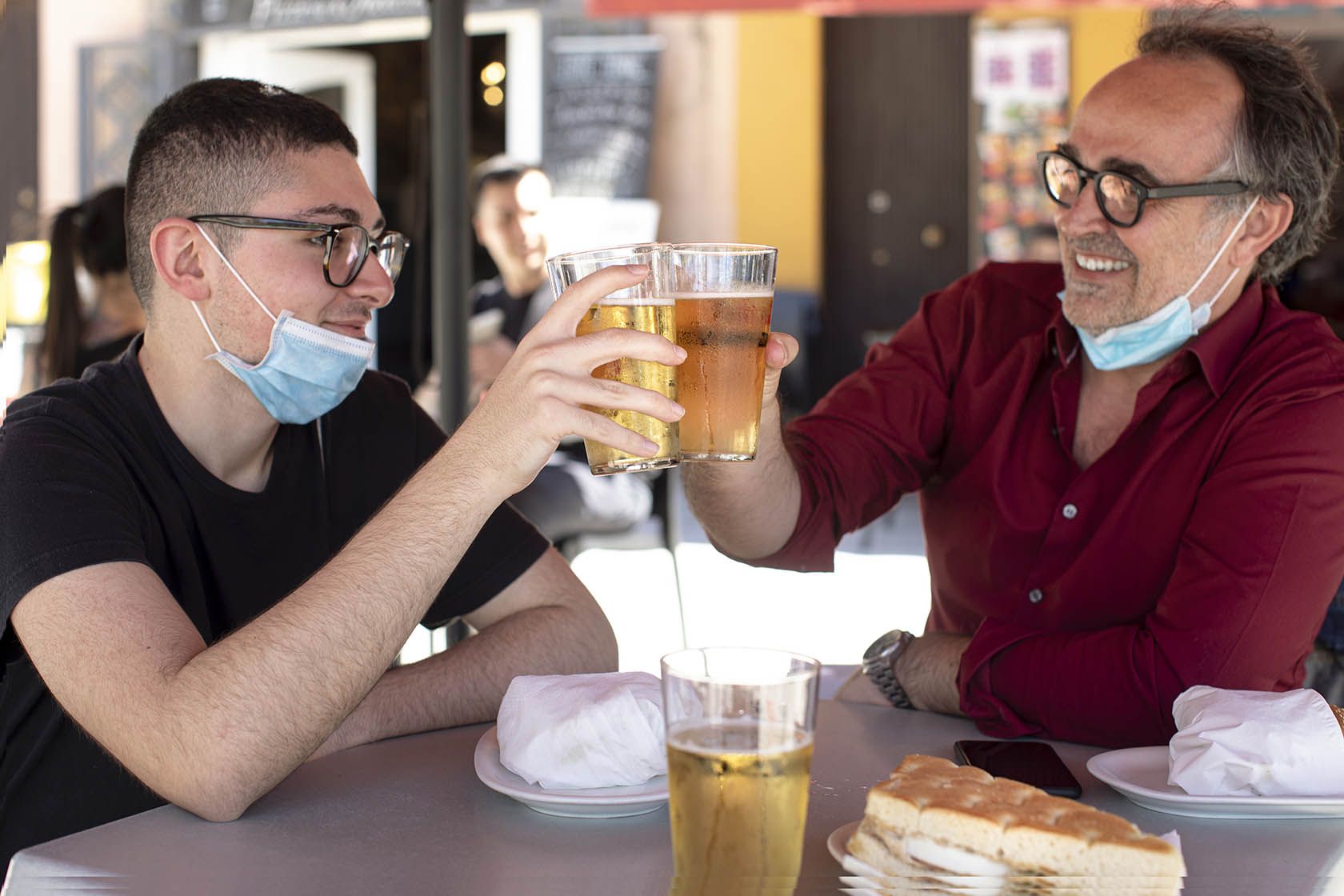 HM Treasury’s Eat Out to Help Out scheme likely provided a meaningful boost to the economy in August according to Deutsche Bank, although its expiry and statistical base effects could mean that it bites September's GDP numbers ahead of a possibly bleak winter.

More than 100 million meals were subsidised by HM Treasury at around 84,700 restaurants, pubs and other hospitality venues in August as the government sought to encourage a return to normal life with an offer to pay half the cost of a meal up to the value of £10 each with no limits on the numbers that could claimed by any one person.

It was a fiscal innovation like no other and a gamble by Chancellor Rishi Sunak, but one that has arguably made a more effective use of £522m than would have been the case had monies been allocated instead to an infrastructure budget, or another Whitehall department.

“The aims of the scheme were twofold: one, to support the food industry, which was the hardest hit industry in the economy (figure 1); and two, to get households returning back to 'normal' day-to-day activity. On both objectives, we think the Chancellor's scheme succeeded - at least in August,” says Sanjay Raja, an economist at Deutsche Bank. “How much of a rise did we see in eating out across August? A pretty big one.”

Raja says the total number of meals subsidised reflects a 60% increase in casual dining when measured against year-ago levels that predate the coronavirus by far, citing OpenTable bookings data that pretty well reflects the data published by the government. 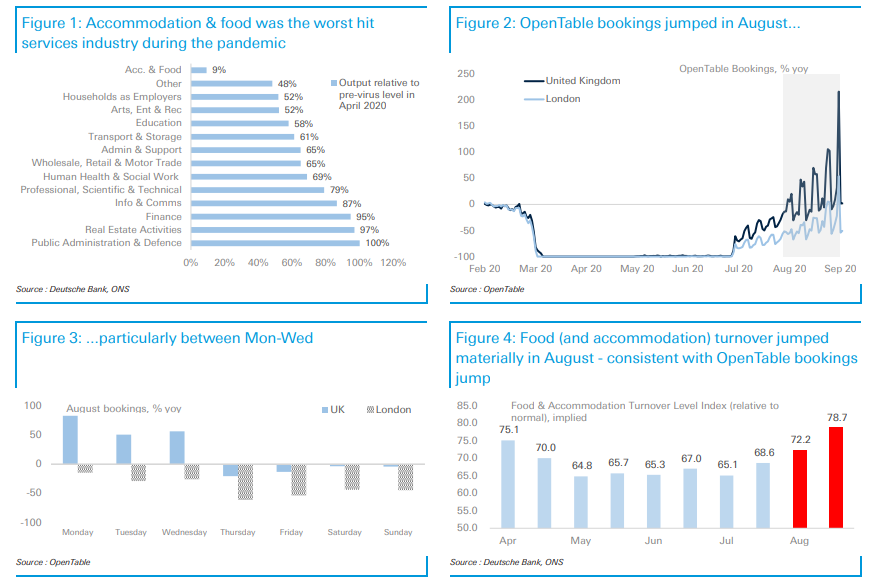 This is all the more notable for the fact that activity in the food and accommodation sector had been more than 40% below year-ago levels in July. When measured against these numbers the Chancellor’s scheme was a flying success, even before the likely upward lift to August GDP.

Raja cites Office for National Statistics data for thinking that food and accommodation industry turnover rose by 13% m-o-m from very low levels in August, and estimates that this could lift UK GDP an extra 2.5% in August. But he and the Deutsche Bank team also say the scheme’s expiry will, when combined with statistical base effects, likely bite the economy in September.

UK GDP grew by 6.6% in July, building on the 8.7% rebound seen late in the second quarter while setting the economy on course for a consensus-estimated 14.4% annualised rebound, which might be a record increase for modern times but wouldn’t be enough to fully offset the annualised -20.4% fall seen in the second quarter when the economy wallowed for half of it in ‘lockdown’.

“It is unclear whether households will be eating out at the same frequency as they did in August. But with some restaurants carrying on the 50% discount at their own expense, it's likely that any negative payback will be somewhat limited,” Raja says. “A word of warning though: as social restrictions tighten over the coming months (as we expect), social consumption activity will likely drop as we get into the winter months. And while the Government's scheme was largely successful, the jump in eating out likely won't last very long.”

New coronavirus "case" numbers hit their highest level since May on Wednesday after a month of strong increases, prompting warnings of further restrictions from the government. Downing Street overlooked the death rate that hit a new low of just 0.005% at the same time.

The number of deaths recorded each day frequently exceeded 15% of the total number of new infections declared each day at the height of the UK epidemic, although it has remained below 0.1% since new infection numbers broke consistently above 1,000 per day in mid-August and just 20 fatalities were notified of on Wednesday against 3,999 new infections. 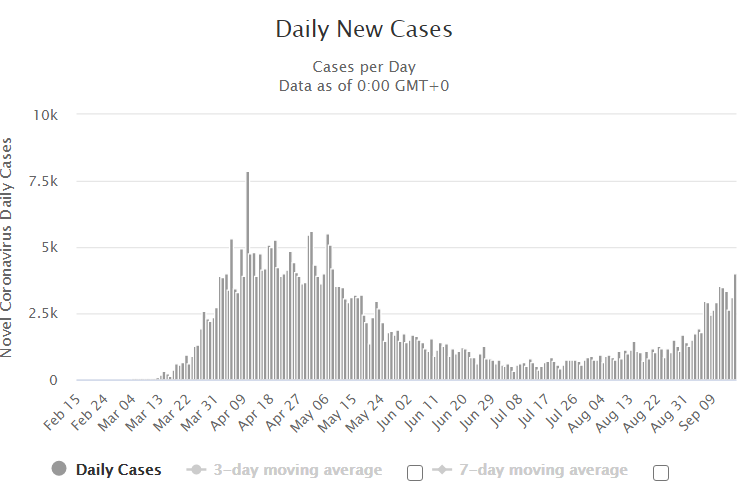 This second wave is yet to show up in funeral homes, but has collapsed the supposedly ‘world beating’ testing and tracing programme, panicking officialdom in the process and leading to a series of new restrictions on activity including on Thursday. All have drawn widespread criticism.

It transpires that there's a significant difference in meaning between the "cases" cited by government officials and reflected in the above graph, and the "number of people with at least one lab-confirmed positive COVID-19 test result" reported on the government's own dashboard.

The government dashboard is yet to be updated for Wednesday's figures but data from prior days indicate the 3,999 new "cases" cited on Thursday as a reason for tightening restrictions on life in the North of England could have been a significant, misleading overstatement of the true level of infection.

"This week the number of patients in mechanical ventilator beds has risen above 100 for the first time since July. The battle against coronavirus is not over - and while we strain every sinew to spring free from its clutches, with winter on the horizon, we must prepare, bolster our defences and come together once again against this common foe," says Matthew Hancock, Secretary of State for Health and Social Care, in parliament on Thursday. "One of our vital lines of defence has been taking targeted action at a local level. We have seen local action work well in some parts of the country and now we must take further action. Mr Speaker, we have seen concerning rates of infection in parts of the North East. Sunderland, for example, now has an incidence rate of 103 positive cases per 100,000 population and in South Tyneside, Gateshead and Newcastle, the figures are all above 70. As a result, local authorities wrote to me earlier this week, asking for tighter restrictions and we have taken swift action."

Some 2,619 "cases" were declared for September 14 but the government's own dashboard says the actual "number of people with at least one lab-confirmed positive COVID-19 test result," for that day was just 1,260. The dashboard can be found here and a chart is included below.

Government ministers and quangos have form for misleading the public about the coronavirus, at least in relation to so-called 'facemasks' where members of the public were misled to conflate surgical masks with respiratory masks of a high filtration capacity - presumably to prevent a run on an inadequate national supply of high filtration capacity respiratory masks - and then later in the recording of virus-related deaths.