The latest official economic data from the ONS shows the UK economy grew 6.6% in July, meaning by at this point half the economic output lost during the lockdown had been recovered, and the third quarter would likely see a record reading for GDP growth.

The record growth reading for the third quarter follows the record-breaking decline of the second quarter, but economists are warning that recapturing all the growth lost in the lockdown will take months as the recovery slows into year-end.

"With most sectors of the UK economy now open, the prospect of large bounces in activity is low. Meanwhile, the fallout from the Chancellor’s plan to end the furlough scheme and the recent pick-up in Brexit anxieties suggest the headwinds to the recovery are beginning to increase," says Nikesh Sawjani, UK Economist at Lloyds Bank.

July was a key moment for the economy as restaurants, pubs and hotels were allowed to open once more in a significant boost to the UK's dominant services sector.

The 6.6% growth was less than the 6.7% markets were expecting, but because the market is trading on more timely economic releases - such as PMIs - we don't see any discernible market impact coming from these figures.

"While it has continued steadily on the path towards recovery, the UK economy still has to make up nearly half of the GDP lost since the start of the pandemic," said Darren Morgan, ONS director of economic statistics. "Education grew strongly as some children returned to school, while pubs, campsites and hairdressers all saw notable improvements. Car sales exceeded pre-crisis levels for the first time with showrooms having a particularly busy time." 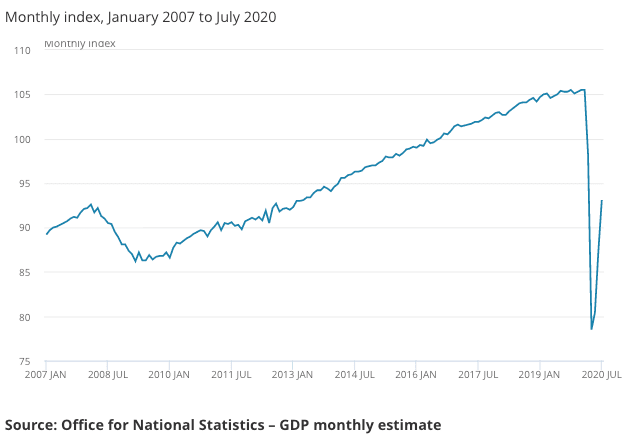 The ONS reports all areas of manufacturing, particularly distillers and car makers, saw improvements, while housebuilding also continued to recover.

The ONS also reports that the UK's largest economic sector, the services sector, continues to see growth but activity remains well below where it was in February, before lockdowns were introduced. 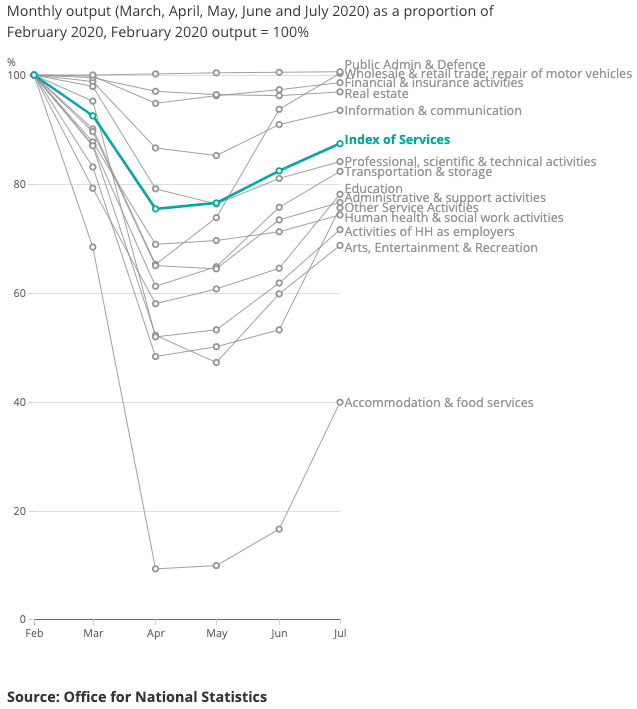 The services sector grew by 6.1% in July, following growth of 7.7% in June, driven by accommodation and food service activities, which grew by 140.8% as the sector was allowed to open once more. The return of some children to school saw education contribute 21.1%.

The ONS also revealed that Construction Output grew 17.6% Month on Month in July, which was ahead of the 10.50% markets were expecting, growth in the sector was however 12.7% lower than where it was at the same time the year prior.

Manufacturing Production increased 6.3% month on month in July, which is ahead of the 5.0% the market was expecting, while the year on year figure read at -9.4%.

Industrial Production for July grew 5.2% on a month on month basis, which is better than the 4.0% expected by markets, the year on year figure stood at -7.8%.

"July was probably the last of the big step ups in activity and a full recovery probably won’t be achieved until early 2022, which is why we think the Bank of England will yet expand QE by a further £250bn in total," says Thomas Pugh, UK Economist at Capital Economics. "The Eat Out to Help Out scheme will have given the accommodation and food services sector a further boost in August, but now that most sectors in the economy are open again there is little scope for further large rises in monthly GDP."

Pugh adds that "talk of tax rises at the next Budget, a further deterioration in the Brexit negotiations and a worrying rise in the number of virus cases and tighter social distancing restrictions will all conspire to slow the recovery even further".

"Looking forward from here, a further slowing of the overall economy is being increasingly anticipated. Both as lockdown is again being imposed, albeit in a more limited way and as we still expect unemployment to rise as firms make longer term decision regardless of the furlough program and insolvencies rise as life support (holidays for VAT and Business Rates as well as easy loans) is withdrawn from the market. There is also talk of tax rises and difficult Brexit negotiations. The danger is that the first – rapid - stage of the recovery leaves rather a lot of work to be done in the second wobbly stage," says James Sproule
Chief Economist UK, Economic Research at Handelsbanken Capital Markets.