The UK economy is underperforming that of the Eurozone and the U.S. courtesy of poor policy decisions, says a new briefing from Berenberg Bank.

The private bank - which is the second-oldest bank in the world - says the UK still boasts a solid economy, however it is "poorly managed", which has lead to years of under-par growth which will likely continue for years to come unless some significant decisions are made before year-end.

Research shows that UK GDP has since 2016 fallen to below where it would have been expected to be had the UK not voted to leave the EU and endured the resultant domestic political turmoil, which includes two general elections, that the vote ultimately triggered: 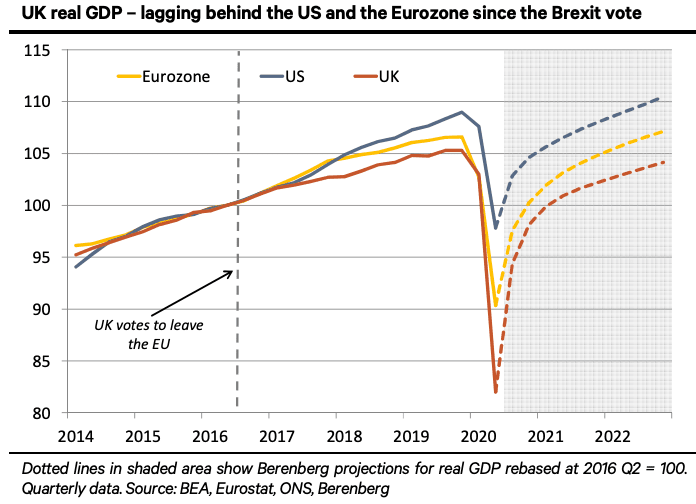 Furthermore, a late response to the covid-19 crisis resulted in a long and severe lockdown that meant the UK suffered a substantial drop in GDP.

"Bad policy choices linked to Brexit and the response to the COVID-19 pandemic have taken a heavy toll on the UK economy," says Holger Schmieding, Chief Economist at Berenberg.

Data presented by Berenberg shows the UK economy grew 2.4% year-on-year in the three years up to the June 2016 referendum, with the U.S. growing 2.5% and the Eurozone 1.5%.

But following the EU referendum result until the end of 2019, UK GDP growth decelerated to an annual average of "1.6% as business investment stagnated and private consumption growth slowed to 1.9% yoy (versus 2.8% pre-referendum)," notes Schmieding.

"Brexit uncertainty and messy domestic politics, including two snap elections, weighed on confidence and risk appetites in the private sector. Over the same period US growth – supported by a big fiscal stimulus – remained solid at 2.5% yoy while growth in the Eurozone – helped by aggressive ECB easing – accelerated to 2.0% yoy," says Schmieding.

Schmieding says the UK government was late to introduce lockdown measures, doing so a week after European nations, ensuring harsh restrictions had to remain in place for longer than elsewhere in order to bring the virus under control which ultimately impacted heavily on the economy.

There are however studies that have been conducted using the full range of data that has been made available from the height of the covid-19 crisis, which suggests lockdown might not have had a bearing on the UK's pandemic; a University of Edinburgh study shows the rate of infection had in fact peaked before the UK introduced its harsh lockdown.

Furthermore, it could be argued that the UK economy was always prone to a greater detrimental impact from lockdowns given its substantial services sector. "The services-oriented UK economy remains particularly vulnerable as we adjust to a more socially-distanced world — especially as relative to its peers, the UK has one of the highest contributions of ‘social consumption’ to GDP according to the Bank of England," says Viraj Patel, Strategist at Arkera.

Recent data suggests the UK economy is recovering, with the same services sector that was a lag in lockdown potentially proving to be an advantage as restrictions ease. 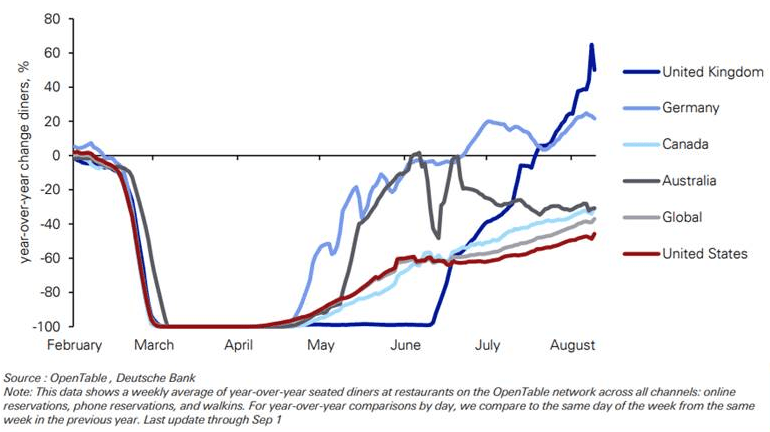 Above: Data from Opentable shows a sharp rebound in restaurant activity, image courtesy of Deutsche Bank.

Regardless, Berenberg says the UK government faces some important decisions before 2020 is through: 1) Whether to make concessions to the EU in order to secure a Brexit deal and 2) whether to raise taxes to pay the bill for the covid-19 pandemic.

On point 2 it is assumed by Berenberg that it is unlikely restrictive tax and spend decisions will be made.

However, on point 1 Berenberg doubt that the UK will make the necessary concessions to strike a deal with the EU.

"In case of a no-deal outcome, UK potential growth may fall to no more than 1.5%, versus 2.1% when the UK was a member of the EU. Unless Johnson softens his position fast to clear the way for an ambitious trade deal with the EU, the UK growth gap versus the US and Eurozone will likely persist for foreseeable future," says Schmieding.

The Times reports that Number 10 Downing Street see the chance of a deal being as low as between 30% to 40%, which is substantially less than the financial markets are currently pricing.

A report by The Spectator's James Forsyth, for The Times, says that the reasons for Downing Street's pessimism resides with the issue of state aid.

According to Forsyth there is a deal to be done on fishing, which is seen as one of the other major stumbling blocks.

(Indeed, a separate report in The Times says the UK will look to double the quote it sets for its fishermen, at the expense for the EU. It looks as though the final deal will involve some give-and-take around quote numbers.)

Forsyth says the real sticking block to reaching a deal in fact lies with state aid rules whereby the UK government invests in industry in order to prop it up.

However, this won't be some repeat of the 1970s which saw the UK throw money at dying industries, rather it is the amount the government wants to invest in industries of the future. In short, technology.

Apparently Johnson and his team want to be able to support UK technology companies to allow them to grow to scale, thereby ending dependence on U.S. and China technologies, which in turn benefit from huge state support.

"The bigger issue is Britain’s desire to use state aid to build up its own technology sector. The view in Downing Street is that this country needs to develop large technology companies at scale and that requires state involvement," says Forsyth.

The EU are nervous of this outcome and are demanding the UK lays out a policy on the matter, which will allow them to move forward and secure a deal.

The UK are however said to be hesitant to lay their cards on the deck.

"It is tempting to imagine that all this talk of no deal is just more Brexit theatre; that the table will be kicked over in one last fight with Brussels, and then a deal will be done at the last with both sides claiming victory. But Boris Johnson is adamant on the state aid point," says Forsyth.