The UK economy suffered a sharp decline in activity in March, according to the first tangible set of economic data covering the advent of the coronavirus crisis.

According to IHS Markit, March data highlight that the coronavirus outbreak has "already dealt the UK economy a more severe blow than at any time since comparable figures were first available over 20 years ago".

The Flash UK Composite Output Index - which gives a combined reading for the services and manufacturing sectors - for March read at 37.1, this is down from February's 53.0 and is a survey record low..

Any reading below 50 signifies decline.

The Flash UK Services Business Activity Index for March read at 35.7, down from February's 53.2 and is once more a record low for the survey. This is significant as the services sector accounts for over 80% of UK activity.

The latest IHS Markit/ CIPS Flash UK Composite PMI was compiled between 12-20 March 2020 and we expect an even deeper contraction to be reflected in the Final PMI figures which would cover the lockdown announced by the Government on March 23. The Government closed schools, restaurants, bars and gyms on March 20, and announced the closure of non-essential shops and introduced a lockdown on movement on March 23.

"The first conventional data for March confirmed that the coronavirus was having a massive negative impact on activity even before the Government introduced significant measures to slow the spread of the virus," says Andrew Wishart, UK Economist at Capital Economics.

The Flash UK Manufacturing Output Index meanwhile fell from 52.2 in February to 44.3 in March, which is a 92-month low. 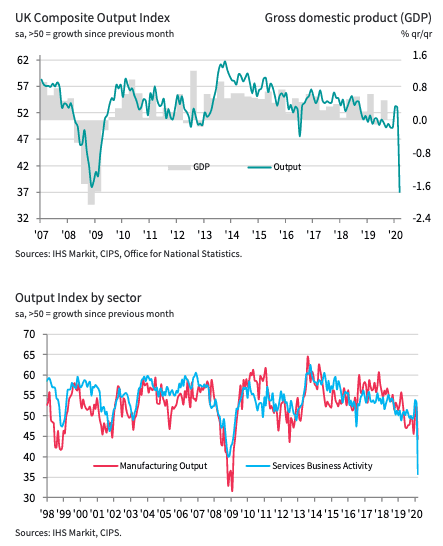 “The surveys highlight how the COVID-19 outbreak has already dealt the UK economy an initial blow even greater than that seen at the height of the global financial crisis. With additional measures to contain the spread of the virus set to further paralyse large parts of the economy in coming months, such as business closures and potential lockdowns, a recession of a scale we have not seen in modern history is looking increasingly likely," says Chris Williamson, Chief Business Economist at IHS Markit.

IHS Markit research shows the March survey reading is consistent with GDP falling at a quarterly rate of 1.5-2.0%, a decline which is sufficiently large to push the economy into a contraction in the first quarter.

However, Williamson says this decline will likely be the tip of the iceberg and dwarfed by what we will see in the second quarter as further virus containment measures take their toll and the downturn escalates.

Understandingly, the flash PMI signalled a fall in employment across the manufacturing and services to an extent not seen since July 2009. 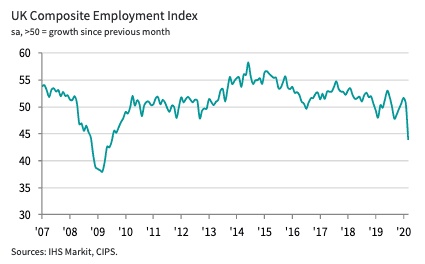 "While the PMI captures the proportion of firms that report a fall in activity, it doesn’t take into account just how poorly each firm is doing. The fact many firms have had to cease trading altogether suggests things could be even worse than the survey suggests," says Wishart.

Capital Economics are forecasting a 15% fall in GDP in Q2, a larger fall in output than in the financial crisis or the great depression.

"But it should be a more temporary one too," says Wishart.