- PMI shows new orders falling in both manufacturing and services.

- But too early to tell if final quarter performance was equally as bad.

The German economy is now almost sure to have slipped into recession during the third quarter, according to Pantheon Macroeconomics, after October's IHS Markit PMI surveys pointed clearly to contagion from the factory sector having now reached the services industry of Europe's economic powerhouse.

Germany's manufacturing PMI appeared to stabilise in October when it rose from 41.7 to 41.9, taking up from a 10-year low, although it had been expected to climb to 42.0 for the current month. However, it wouldn't be the first time the PMI has risen only for it to fall sharply again the very next month, if such a thing happens November.

The services sector PMI missed market expectations to an even greater extent than its industrial rival, with the index falling from 51.4 to 51.2 in October and stoking further concerns among economists about the outlook for growth in Europe's largest economy.

"We don’t pay too much attention to the services index, but the survey’s overall message is clear; the German economy is in recession. We reckon the Q3 GDP numbers will confirm this—with a second consecutive quarter-on-quarter fall in GDP—though it is too soon to say whether Q4 will be similarly poor," says Claus Vistesen, chief Eurozone economist at Pantheon Macroeconomics. 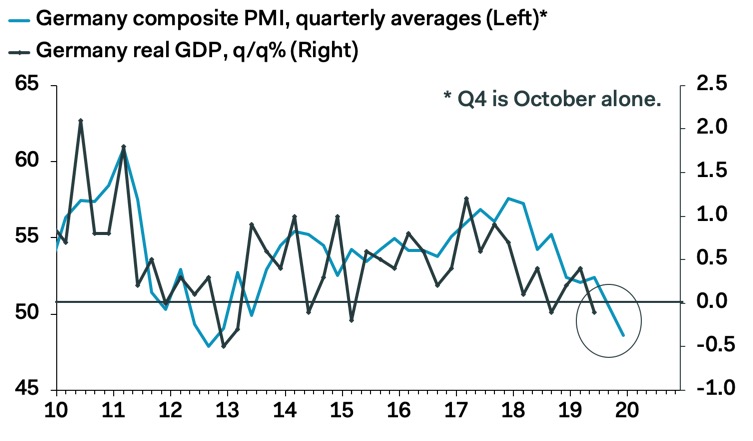 Declines were reported across the board in October, with factory output, new orders and employment each falling during the current month. Employment fell for the first time in six years, with job losses concentrated on temporary and contract workers, although the services sector was not left untouched either. A majority of services firms reported this month that they expect output to fall in the coming year, for the first time in seven years.

Services firms responding to the IHS survey reported slower employment growth in October, with the sector adding new hires at its slowest pace for more than three years, while new orders for the export side of the industry fell at their fastest pace since IHS first began asking the relevent question back in 2014. Pantheon's Vistesen says the  German services PMI is not always reliable and that other indicators are currently showing more resilience, but he still tips a German recession.

"New business continued to fall in the private sector as a whole, especially in exports where the slowdown in manufacturing is still biting. Evidence of this is clear as firms reduced their work backlogs at the fastest rate in seven years. Looking ahead, the main worry with these data is that they now point to clear evidence that weakness in manufacturing has infected the services sector via falling confidence and slower growth," Vistesen says.

German growth fell by 0.1% in the second quarter, the second contraction inside of a year, although two consecutive declines are required for an economy to be considered to be in recession. Data covering the third quarter will reveal whether a recession has hit at 08:00 on Tuesday, 14 November. The government is now said to be expecting GDP growth of just 0.5% for 2019, down significantly from the 1.5% seen in 2018 and the 2.2% seen in 2017.

The economic slowdown was ignited in Germany by the U.S. trade war with China and the implementation of new EU rules governing the emissions measurement process in the car sector. However, and although Germany was among the first economies to reveal symptoms of sickness, the downturn is not limited to Germany or even Europe on its own. Increasingly, the entire global economy is turning lower.

"The downturn in manufacturing abated slightly in October, but the service sector worries have increased. The German composite PMI increased from 48.5 to 48.6, indicating a contraction in the economy at the start of the fourth quarter too," says Bert Colijn, an economist at ING. "The overall picture is one of a feeble eurozone economy ahead of a few decisive months. The service sector is keeping GDP growth in positive territory for the moment, but growth could easily tip into the negative."

The European Central Bank (ECB), which is widely regarded as having ran out of policy bullets with which it can fight any slowdown in growth, called in September for Eurozone governments to spend more whenever they are not constrained by EU rules. This was after cutting one of its interest rates further below zero last month and restarted its quantitative easing program in an effort to lift growth and inflation but few see it being enough to reverse the slowdown in either the German or Eurozone economies.

Eurozone GDP growth is forecast by the European Commission to come in at just 1.2% for 2019. This is below what the ECB's calls 'potential growth' and means the economy is not currently growing fast enough to generate any inflation pressures at all. The ECB will announce its latest policy decision, the last of President Mario Draghi before former International Monetary Fund (IMF) boss Christine Lagarde takes over, at 12:45 London time on Thursday.