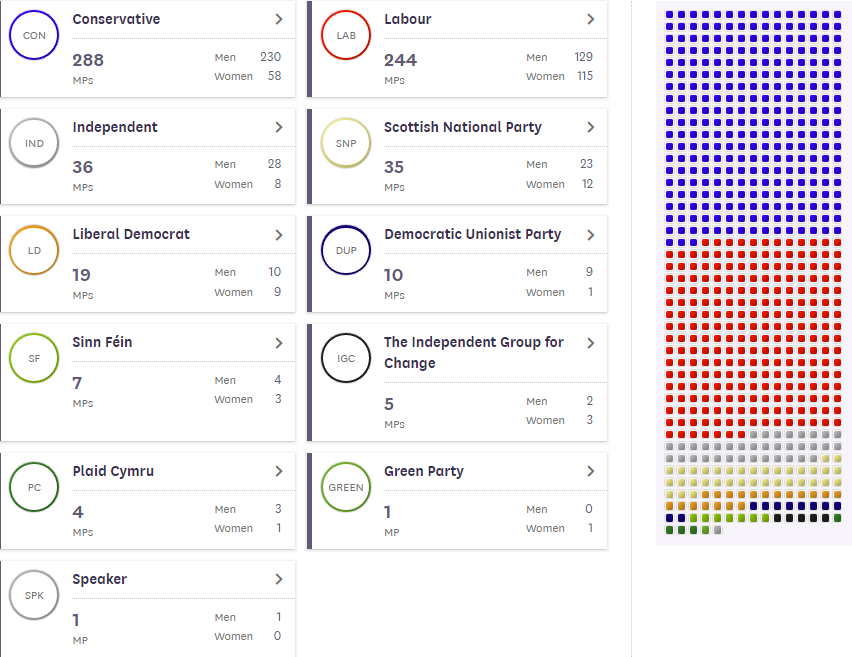 - DUP and Labour votes essential to passing deal, many not forthcoming.

- UK on course for a Saturday Brexit showdown in House of Commons.

The UK is on course for a Saturday showdown over Brexit in the House of Commons after Boris Johnson emerged from negotiations in Brussels claiming to have reached a new deal with the EU, as the Prime Minister appears to be short of the support needed to get the agreement through parliament.

Rebels from both sides of the Brexit divide, as well as defectors from the Conservative Party, have either explicitly declared their support for Prime Minister Johnson's proposals or indicated strongly that they could back it in a vote that is expected to take place in the House of Commons on Saturday.

But Johnson still appears to lack the 322 votes that are needed to move onto the next of multiple stages in the ratification process, likely putting him on course to break his "do or die" pledge to deliver Brexit by October 31.

"With just two weeks until the agreed extension to the Article 50 process reaches its deadline, the necessary steps to approve the deal and legally ratify and cement it may require a short technical extension," says John Wraith, head of UK rates strategy at UBS.

Oliver Letwin, the MP for West Dorset, told BBC News he will vote for the PM's proposals. That's notable because Letwin was a leading architect of the process that led the 'Benn Act' to be foisted upon the government with the former attorney general having aided repeated, but highly controversial, hijackings of the parliamentary agenda. The Conservative Party whip was withdrawn from Letwin in September after he voted in favour of the Benn Act. 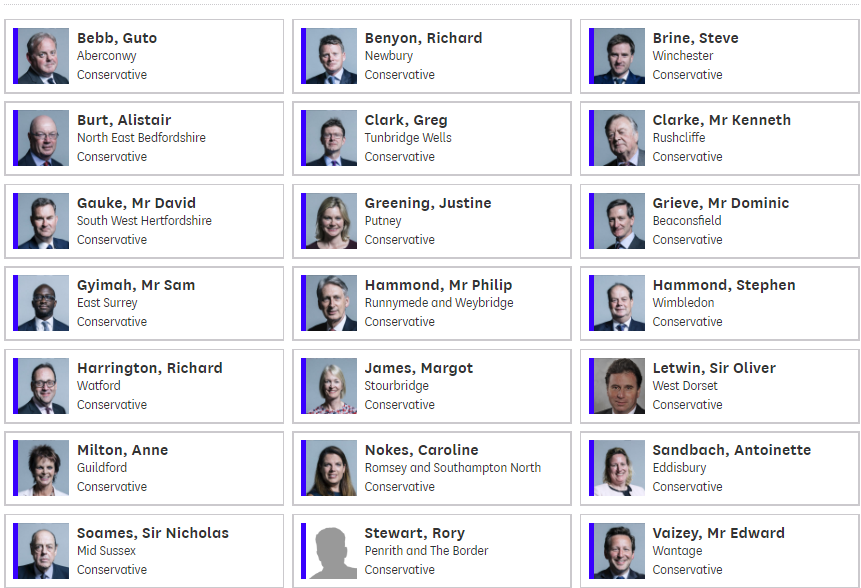 Above: Former Conservative Party MPs who voted in favour of Benn Act on September 03, and potential allies to Johnson.

Steve Brine and Stephen Hammond, both also among the 21 rebels to have the whip withdrawn last month after voting to tie the government's hands in the negotiations, also indicated Thursday that they could support the deal.

Brine posted a message posted to his Twitter account while Hammond told ITV News he will certainly vote in favour of the proposed agreement. Most of the other remain-backing rebels are still undeclared although two of the 21 have so far stated their opposition to the pact.

In a further boost to the Prime Minister, Nick Boles also indicated his support for the proposals after congratulating Johnson on his achievement in a social media post. Boles, a committed remain supporter and architect of the 'Common Market 2.0' idea that would have seen the UK remain in the EU customs union, quit the Conservative Party in April after the House of Commons rejected his plan.

"Securing a compromise Brexit deal is a major negotiating achievement for Boris Johnson. I congratulate him. I seem to remember him saying the Benn Act would stop the EU making the necessary concessions. He was wrong about that. In fact it helped bring Brexiteers to their senses," Boles says.

"Well done Boris. He's done what a lot of the naysayers said that he wouldn't do. He's ditched the backstop...it's all sounding fantastic but quite cautiously I'd like to see it all in black and white before making a final decision but it's all very positive what I'm hearing," says Andrea Jenkyns, a Conservative MP who voted against Theresa May's proposals on all three occasions it was put to MPs. 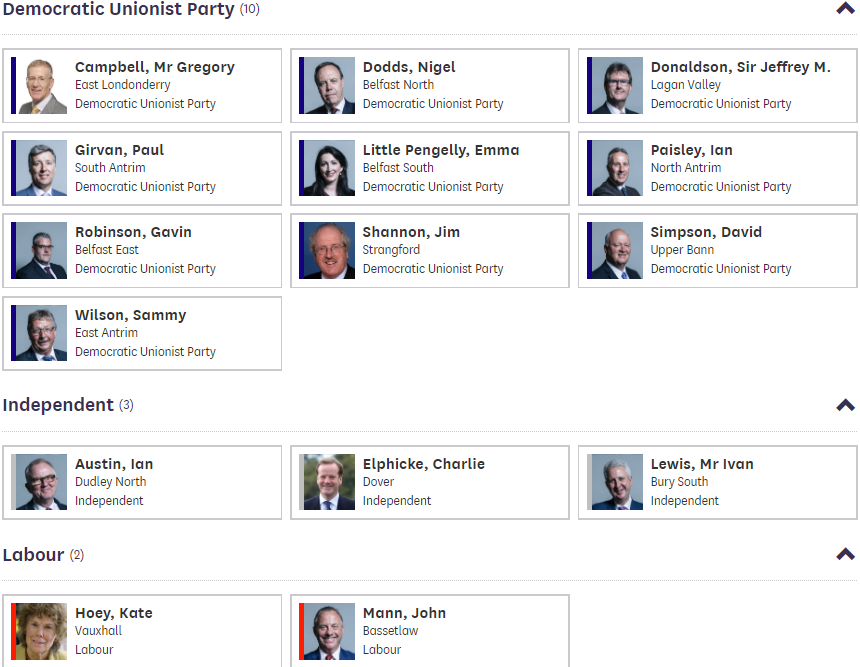 Above: Non-Conservative opponents of the Benn Act, and potential allies to Johnson in his effort to secure a Brexit majority.

"Failure to win the DUP's backing – probably deterring a number of Conservative MPs from supporting the Government – means the deal may fall short in the UK Parliament as Theresa May's earlier version did three times," says UBS' Wraith. "There is also expected to be a proposed amendment to the deal demanding it is put to a confirmatory referendum before it is approved."

The government still appears to remain a long way off the 322 majority it needs to get the treaty through the House of Commons, in spite of the various conversions from either side of the Brexit divide.

And Johnson is on course to break his pledge to deliver Brexit by October 31 without "dither or delay" because complying with the 'Benn Act', which requires him to seek an extension to the Article 50 negotiating period if a deal is not ratified in law by October 19, is impossible. Not only that, but he also still lacks the support of allies who're key to some votes within the Conservative Party.

The Democratic Unionist Party (DUP), the government's confidence and supply partner, has come out against the Prime Minister's plan. It says the proposals around customs would be economically disadvantageous to Northern Ireland and that they would undermine the union by leaving the province and the province alone subject to European Union customs rules while continuing to formally recognise it as part of the UK's customs territory.

"We recognise that only those goods ultimately destined for the Republic of Ireland would be subject to tariffs but the reality remains that the EU would have a veto on which goods would be exempt and which would not under the Joint committee arrangements. This is not acceptable within the internal borders of the United Kingdom," says Arlene Foster, leader of the DUP.

Foster says Johnson's proposals drive a "coach and horses" through the professed sanctity of the Belfast Agreement, otherwise known as the Good Friday Agreement. She alleges Johnson has traded the principle that both nationalists and unionists must "consent" to certain legal changes in the province in favour of "majority rule on this single issue alone".

In a further blow to the Prime Minister, a former leader of the Conservative Party also expressed sympathy for Foster's concerns. Ian Duncan Smith, who's also a member of the European Research Group, said Johnson appears to have abandoned the principle of consent in Northern Ireland. And the Labour MP Kate Hoey, who is influential among Brexit backers and one of the few opposition votes that the government can hope to attract in order to get its proposals approved, echoed the DUP's wording when commenting on the deal Thursday.

"Seems the UK government has not thought through the repercussions of driving a coach and horses through the Belfast agreement," Hoey said in a Twitter post, herself quoting a DUP tweet.

Above: Parliamentary division over 'meaningful vote' three on March 29, 2019.

There are 650 seats in the House of Commons although one of them is occupied by the Speaker, who does not vote, and seven of them sit unoccupied by the Irish nationalist party Sinn Fein. That reduces the effective majority necessary for passing legislation down to just 322 but the Prime Minister and his Conservative Party have just 288 seats between them, which means he is in need of 34 votes, more than the total number of MPs that have been lost through whip withdrawal and defections.

And the government will almost certainly have to request from the EU a third delay to the UK's departure because, absent an effective loophole, the 'Benn Act' requires him to seek an extension to the Article 50 negotiating period if a deal is not ratified in law by October 19. Ratification requires approval in both chambers of parliament, among other things, which would be all but impossible ahead of the deadline even in the unlikely event that the House of Commons backs Johnson's deal on Saturday.

"It seems the Prime Minister has negotiated an even worse deal than Theresa May's," says opposition Labour Party leader Jeremy Corbyn, before calling for the 2016 Brexit referendum to be rerun. "This sell-out deal won't bring the country together and should be rejected. The best way to get Brexit sorted is to give the people the final say in a public vote."

All of this sets the Prime Minister up to break his "do or die" pledge at a time when a general election is widely seen by MPs and pundits as being inevitable. And with the Brexit Party already having panned the proposals, while continuing to advocate its own preference for a 'no deal' Brexit that it describes as a "clean break" Brexit, the Conservative Party could find itself facing an uphill climb to secure a majority in any forthcoming ballot.

What that might mean for Brexit, remains to be determined.