Labour market data out of the UK on Tuesday came in on the disappointing side, with a fall in employment and a below-expectation rise in wages being reported by the ONS.

The three-month-on-three month employment change to August showed a decline in jobs of 56K, markets were expecting 23K jobs to be added to the economy.

The unemployment rate ticked up to 3.9% in August, from 3.8% in the previous month.

"A really poor UK job report, with the biggest decline in the number of employed people since 2015," says Martin Lund, an economist with Nordea Markets. "We have warned about the weak outlook for the UK job market for a while. The probability of a rate cut is increasing!"

Wage growth remains positive, however the pace of wage growth disappointed against expectations. Wages, with bonuses attached, grew 3.8% in August, markets were forecasting an increase of 4.0%. In real terms (after adjusting for inflation), annual growth in total pay was estimated to be 1.9% and annual growth in regular pay was estimated to be 2.0%.

"The UK jobs market remains fairly resilient. The number of people employed continues to increase compared to last year, largely driven by the increase in women in work. And while unemployment has increased slightly over the last quarter, at 3.9%, the unemployment rate remains low by historical standards. Nominal average weekly earnings have also continued to grow at 3.8% year-on-year, a shade lower to the highest nominal pay growth since 2008 of 4% charted last month," says Jing Teow, economist at PwC.

The numbers did not have an impact on Sterling owing to the market's ongoing focus on Brexit negotiations. The assumption remains that the outlook for the UK economy as a whole, and employment, will ultimately depend on whether the EU and UK can strike a Brexit deal that is passed by the House of Commons.

Perhaps the most significant element in the report is the ongoing decline in job vacancies, which suggests the economy is no longer adding jobs.

The number of vacancies had been generally increasing since 2012, but they have been falling since early 2019.

"Job vacancies are down to the lowest since late-2017, and have indicated a continuous softening in the demand for staff throughout the year to date, which matches precisely the signal of weakening demand for staff from the REC/KPMG recruitment industry survey," says Chris Williamson, Chief Business Economist at IHS Markit. 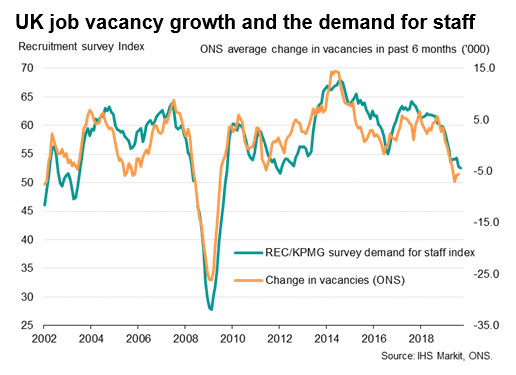 "Although the UK has had a good run of strong employment and wage growth, more recent data suggest that uncertainty is starting to bite. While employment has increased compared to a year ago, employment and vacancies have declined over the last quarter, while unemployment has increased over the same period. The increase in the unemployment-to-vacancy ratio, a reversal of the consistent downward trend observed since 2011, suggests that labour market tightness is starting to ease and that vacancies are now less difficult to fill," says Teow.

Concerning the outlook, there remains a sense that the jobs market is cooling, but much still depends on whether the Brexit question will be settled anytime soon.

The striking of a deal might offer up some much needed confidence to UK businesses, but with the prospect of another Brexit delay and a snap General Election remaining the most likely route forward, the political outlook remains unconstructive for the country's job market.

"The Brexit-related slump in corporate confidence finally has taken its toll on the labour market," says Samuel Tombs, UK Economist with Pantheon Macroeconomics. "Looking ahead, labour demand looks set to continue to soften, given that the number of job vacancies was 1.4% lower in Q3 than in Q2. Most surveys of employment intentions also have deteriorated over the last few months and point to no growth in employee numbers ahead."

“Amid a wider slowdown of the global economy, a Brexit deal is needed for firms and government to refocus on the domestic agenda, delivering productivity-enhancing investment in R&D, infrastructure and skills.”