- Economy contracts in August after revisions to July and June.

The UK economy contracted in August but fresh Office for National Statistics (ONS) revisions have revealed that growth in the prior month was faster than previously thought and the second-quarter downturn was shallower than the initial data suggested, meaning a recession could still be some way off.

A sharp fall in manufacturing activity drove a 0.1% contraction in GDP growth during August, the ONS said Thursday, which was below the consensus for an unchanged reading. But the contraction came only after the July increase was revised upward by a matching 0.1%, meaning the actual prior expansion was 0.4% rather than the 0.3% initially declared. In a further bonus for the economy, June growth was revised up from 0% to 0.1%, meaning the second quarter contraction was 0.1% rather than 0.2%.

The data means the UK likely avoided a recession, which is defined as two consecutive quarters of contraction, according to Capital Economics. The London-based consultancy, which has warned the Bank of England (BoE) could respond to economic weakness with an interest rate cut within months, says Thursday's data may mean third quarter growth of 0.4%. 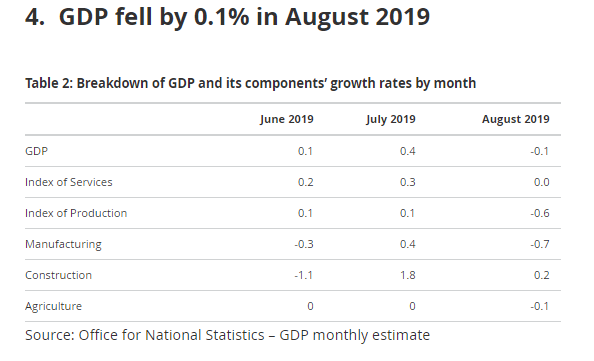 Above: ONS table showing GDP and sector growth rates in each of last three months.

"While GDP fell by 0.1% m/m in August as we had expected (consensus 0.0%), the fact that growth in July was revised up from 0.3% m/m to 0.4% m/m means fears that the economy is already in recession have been banished. In fact, the August GDP data suggest the economy might grow by 0.4% q/q in Q3, up from our previous estimate of 0.3% q/q. The fall in GDP in August was due to a 0.7% m/m drop in manufacturing output," says Andrew Wishart at Capital Economics.

Some had ancitipated that changes in maintenance schedules within the automotive sector would lead to a sharp increase in car production that lifted overall sector output in August, which was supposed to keep the economy expanding at a healthy rate. That noteworthy increase in car output did come through although, after the revisions to prior month figures, it wasn't enough to avert a monthly contraction for August.

"There is good reason to think that the all-sector PMI, which suggests the economy will contract by around 0.1% q/q, is being dragged down by sentiment," Wishart says. "The big picture, though, is that the risk of a no deal Brexit every few months is weighing on both investment and consumer spending. That’s why we have recently revised GDP growth in our repeated Brexit delays forecast down from 1.5% next year to 1.0%. That may be enough to prompt the Bank of England to cut interest rates."

Paul Dales, chief UK economist at Capital Economics, says this suggests households have been more sensitive to Brexit uncertainty than was previously thought to be the case. And with the global economy now going down the pan at the same time, he forecasts the Bank of England to take action before long. 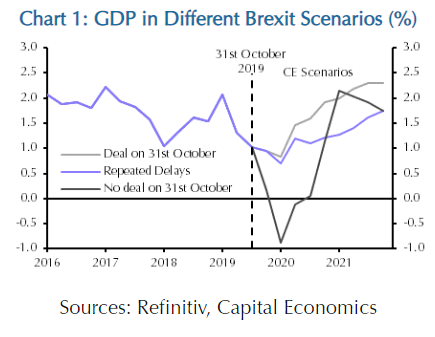 "We still believe there is only one scenario in which the UK economy falls into a recession, and that’s a relatively shallow and short recession after a no deal Brexit. But we think there are now two scenarios in which interest rates are cut – after a no deal and after one or two more delays to Brexit. Another way of putting it is the only way in which rate cuts are avoided is if there’s a Brexit deal," Dales writes, in a recent briefing to clients.

The economy is now struggling under the weight of uncertainty thrown up by the Brexit process, which comes on top of icy winds blowing in from overseas. Methodology changes saw the ONS make sweeping revisions to earlier growth estimates last week, with the upshot being that GDP growth was 0.1% higher at 1.5% for 2018 but that household spending growth was lower than statisticians previously thought in seven out of the last ten quarters.

A July speech from the BoE's chief economist, Andy Haldane, suggested the bank is actually increasingly worried about the economic impact of Brexit uncertainty. However, and in the wake of Thursday's data, not everybody is on board with the idea that it will cut rates so soon. Capital Economics says the BoE would slash Bank Rate from its current 0.75% by the end of January if Brexit is delayed a third time at the end of October, although others see it waiting for a final outcome.

"Revisions paint the economy’s recent performance in a better light, undermining the case for the MPC to rush ahead and cut Bank Rate before the Brexit path is known," says Samuel Tombs, chief UK economist at Pantheon Macroeconomics. "Growth is being driven by underlying momentum in the services sector, reflecting solid growth in households’ real incomes...Once again, the “hard" data suggest that business surveys pointing to recession should be down-weighted while the Brexit crisis is brewing. We continue to expect the economy to hold up better than the MPC expects."