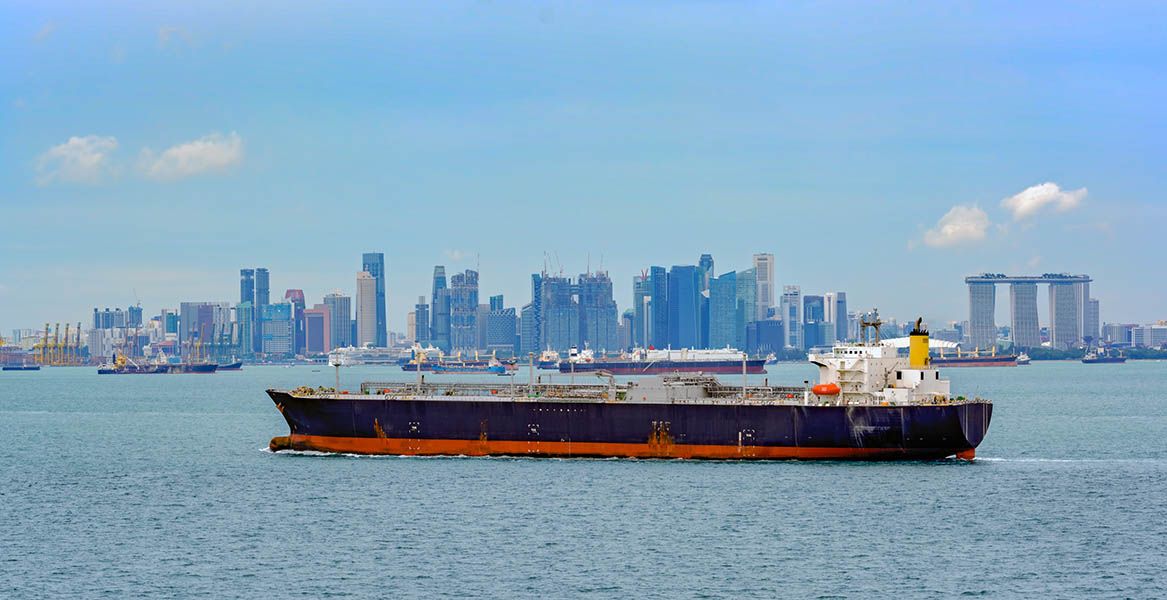 - Singapore 'canary in the coal mine' for global growth

- But Baltic Dry Index hints its not all doom and gloom

A surprise contraction in Singapore’s GDP is sounding alarm bells for the global economy.

Singapore’s GDP fell by -3.4% in the second quarter compared to Q1 the worst contraction since the third quarter of 2012. 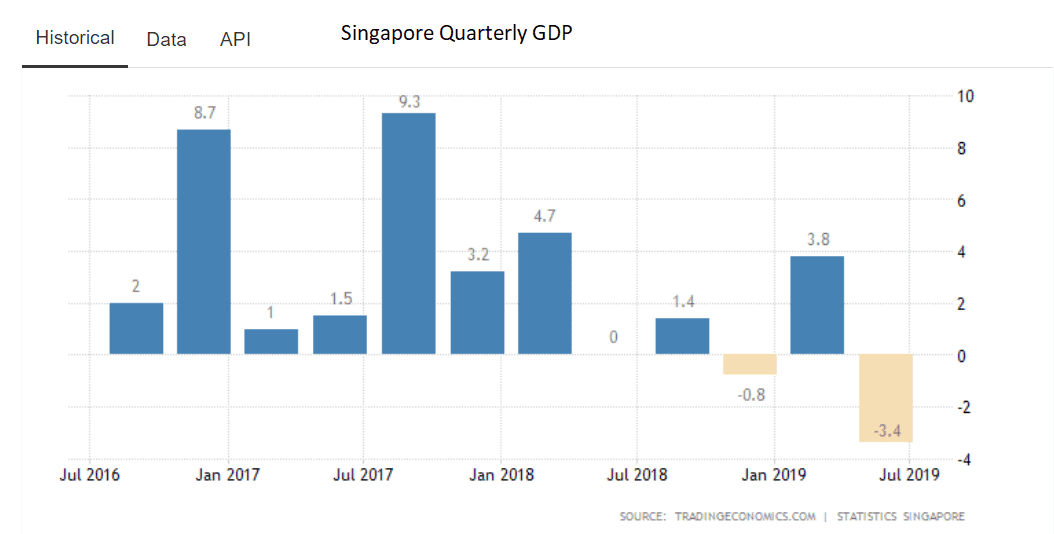 Compared to a year ago, growth increased by a mere 0.1% - a reading well short of analysts expectations of 1.1% - and well short of the previous quarters 1.1% year-on-year growth rate.

The surprising slowdown in what has always been considered a leading Asian tiger economy has been interpreted as a bad omen for the global economy and a symptom of the slowdown in global trade caused by disruption to supply chains from the U.S.-Sino trade war.

“Singapore is a very small open economy. Singapore releases its GDP report soon after the end of the quarter. Therefore, it is a good barometer of the health in the world economy. Singapore GDP contracted by 3.4%saar in Q2 2019. This suggests that ongoing US‑China trade tensions are beginning to negatively impact the Asian region,” says Joseph Capurso, an analyst at Commonwealth Bank of Australia (CBA) in Sydney.

A deeper delve into the data showed that the main culprit of the yearly slowdown was a decline in manufacturing - a widespread feature of the wider global slowdown.

"The drag came from the manufacturing sector which contracted for the second consecutive quarter by 3.8% y/y," says Liew.

The quarterly growth decline was more concerning, however, as it showed contraction in all three major sectors - manufacturing, construction, and services. 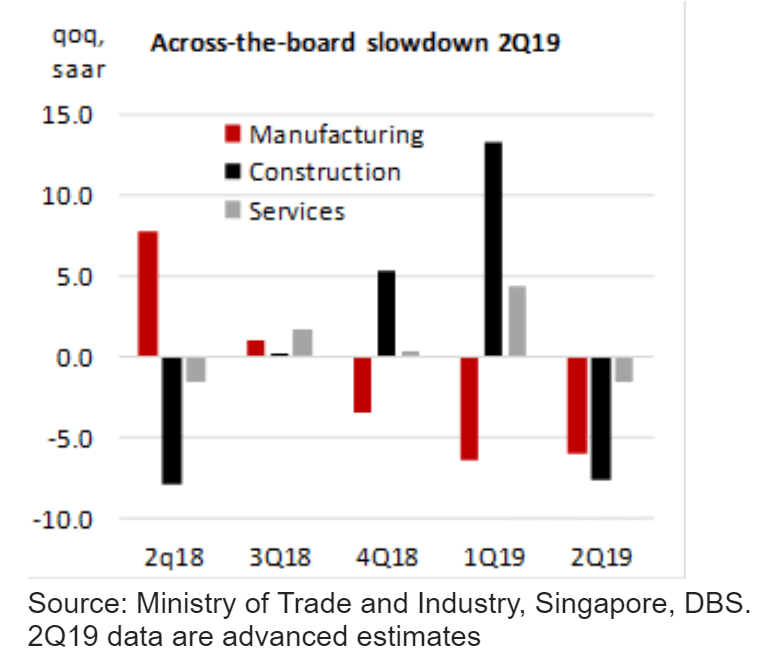 In early July, the Monetary Authority of Singapore (MAS) and the Ministry of Trade and Industry (MTI) have jointly highlighted their intention to review the current growth forecast range of 1.5 – 2.5% for the year 2019. They cited Singapore’s economy has been "clearly affected" by the global slowdown in manufacturing, trade and investment, and the "GDP growth for the year as a whole is likely to be weaker than earlier envisaged".

There is a risk however that the data could be a bit on the pessimistic side, however, and the data could get revised up in subsequent releases, according to Taimur Baig, Chief Economist, and DBS Group in Jakarta.

His view is that although Singapore GDP is widely regarded as a leading indicator for the world economy there are other signs - such as the rise in Baltic Dry Freight Index which suggest the opposite, and that the global economy could also be on the cusp of a recovery.

“Looking at Chinese PMI data and global freight rates, we see some signs of stabilisation, perhaps even a rebound in June. Policy makers may not, however, take that as a sure sign of a trough, as global uncertainties remain considerable,” says Baig. 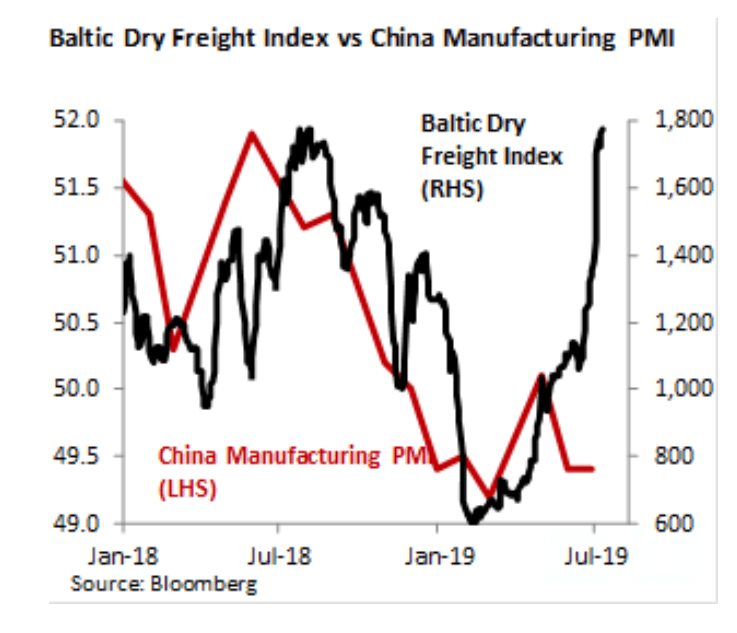 The Baltic Dry Freight Index tracks the cost of shipping freight and is a widely used barometer of global growth; it has been rising ever since the start of 2019.

It is a good leading indicator of Chinese Manufacturing as can be seen from the chart above, and suggests that the current low readings for Chinese official and Caixin PMI data will soon turn up.

This suggests the global slowdown may not be as bad as currently feared.