UK retail sales declined by 0.5% on a month-on-month basis in May report the ONS, the declines adding to the 0.1% decline seen a month prior.

Markets were expecting this result, meaning the outcome is neutral for currency markets.

However, the trend of softer retail sales appears to be growing as the strong trend in the first quarter of 2019 continues to unwind.

Year-on-year retail sales stand at 2.3%, which is a disappointment as the market were expecting a reading of 2.7%.

However, according to economist Andrew Wishart at Capital Economics, the fall merely brings retail sale dynamics back in line with average annual growth in sales witnessed since the financial crisis of 2008. 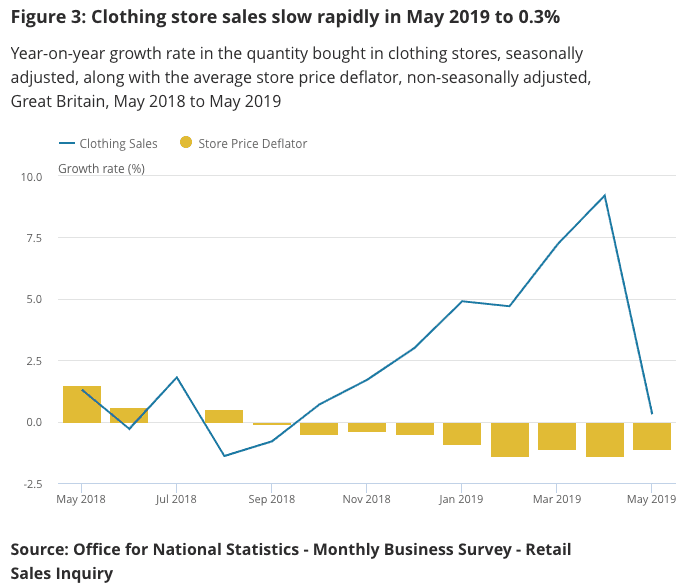 Falls were apparently driven by a 4.5% fall in clothing sales as unusually warm weather in April was followed by a cooler May; and with June being one of the wettest on records the prospect of a strong bounce-back for the sector appears slim.

"That might have put people off from purchasing summer clothes. And with June being particularly wet, a big bounce back seems unlikely," says Wishart.

It is noted that surveys of all retail sales have continued to be downbeat in June.

"But we are not expecting a sharp slowdown in consumer spending. After all, with wage growth still running considerably higher than inflation, households spending power is on the rise. If sales are flat in June, the slowdown in the retail sector would take a little under 0.1% off quarterly GDP growth," says Wishart.