- Stockpiling 'frenzy' is over

- But survey shows manufacturers resolutely optimistic about the future

The UK's manufacturing sector contracted in May according to survey data which showed the total volume of new business placed fell for the first time in seven months.

The IHS Markit Manufacturing PMI for May read at 49.4, markets had been expecting a reading of 52.0 which confirms this to be a deeply disappointing number.

Any reading above 50 indicates expansion, anything below indicates contraction.

The data saw Sterling reverse some of its morning gains against the Dollar and Euro, although we believe that Sterling remains a devoutly politically-devout currency at present and won't be too phased by good or bad data.

The weakness in the manufacturing sector comes as the notable stock-building activity that characterised earlier months is unwound.

"The stockpiling frenzy of the first quarter is translating into a lull in activity for UK manufacturers in the second. But while this is partly a temporary correction, the sector faces a challenging summer as firms grapple with how best to prepare for a possible October 'no deal' Brexit," says James Smith,
Developed Markets Economist at ING Bank in London.

Manufacturing received something of a boost in the run-up to the March Brexit deadline, which was of course delated into October. The contribution from stockbuilding and output of -0.9 and -1.0 points respectively are cited as the main drivers of the 3.7 point fall in the headline balance.

"May saw the trends in inventory holdings and purchasing activity all impacted by the delay to Brexit. The latest survey saw a sharp easing in the rate of increase in finished goods stocks and pre-production inventories drop for the first time in ten months," say IHS Markit. 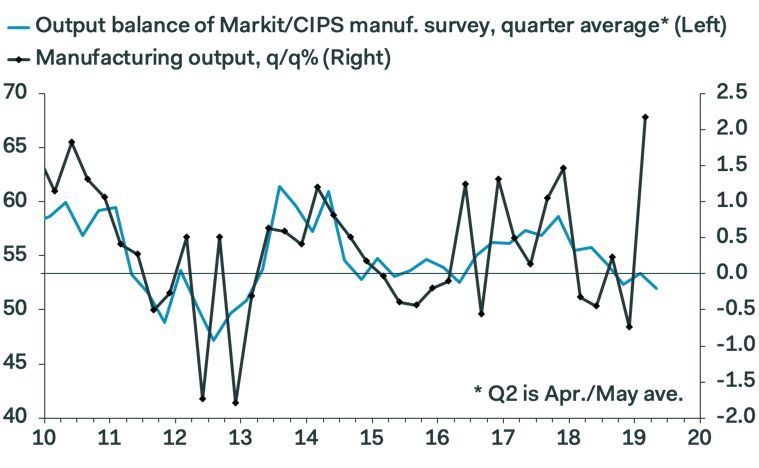 The above graphic, courtesy of Pantheon Macroeconomics, shows the PMI data (blue line) contrasted to the official data that comes out weeks later. It suggests that while the PMI survey data is not 100% accurate it can predict the trends in official data. Hence a sharp fall in official manufacturing data is expected.

Also weighing on manufacturing activity was the overall global slowdown in activity that is beseting Asia and Europe. These regions are seeing economic activity slow with U.S.-inspired trade tensions being widely cited as a leading cause. "Britain isn't immune to the global economic downturn. The risk of contagion from a sluggish Europe may be unavoidable," says Marc-André Fongern, Head of Research at MAF Global Forex.

"Throw in the impact of global trade tensions, and the sector faces a challenging few months," says ING's Smith.

Despite the dour headline data, the survey reports manufacturers are optimistic on the future.