The UK Services PMI for January read at 50.1 according to a report released by IHS Markit on February 05, a figure that places the UK economy's largest sector marginally in growth territory with anything below 50 signalling contraction.

Markets had forecast a reading of 51.1 which would be more in line with December's reading of 51.2. The disappointment is therefore a negative for Sterling as it signals the economy is slowing down at the start of the year.

According to IHS Markit, January data indicated a renewed loss of momentum for the UK service sector, with a decline in incoming new work reported for the first time since July 2016. Subdued demand conditions meant that business activity was broadly flat at the start of 2019, while concerns about the economic outlook weighed more heavily on staff recruitment.

"The latest PMI survey results indicate that the UK economy is at risk of stalling or worse as escalating Brexit uncertainty coincides with a wider slower slowdown in the global economy," says Chris Williamson, Chief Business Economist at IHS Markit, which compiles the survey. 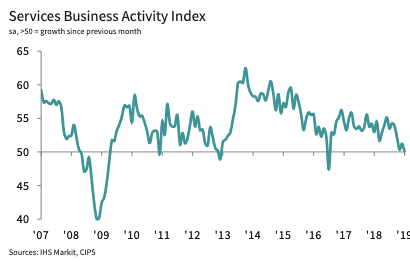 Following the release of the data Pound Sterling was seen trading softer against most currencies, but the impact we believe will ultimately be immaterial as markets are focused primarily on the state of ongoing Brexit negotiations.

Economists are of the belief that a Brexit deal struck before March would allow for a pickup in UK economic activity as stalled investment is released and businesses operate with more certainty.

"Brexit uncertainty continues to be at the heart of the malaise as clients delayed orders and consumers were deeply reluctant to spend under the continuing cloud of hesitation, indecision and ambiguity," says Duncan Brock, Group Director at the Chartered Institute of Procurement & Supply.

According to the report, survey respondents overwhelmingly linked the slowdown in business activity growth to heightened political uncertainty at the start of 2019. A number of service providers reported that Brexit related concerns had dampened client demand and resulted in delayed decision making on new projects.

New business volumes declined for the first time in two and-a-half years during January, although the rate of contraction was only modest. Political uncertainty was the most commonly cited reason for lower new orders, with firms noting that Brexit concerns had led to more cautious spending among clients and risk aversion in relation to new projects.