- UK unemployment falls back to 1970s low in November.

- Pay rises at fastest since 2008 as labour market tightens.

Unemployment fell back to a multi-decade low and wages rose at their fastest pace since the financial crisis during November, according to Office for National Statistics data released Tuesday, as the labour market tightened further.

Wage packets excluding bonuses rose at an annualise pace of 3.4% on average during November, up from 3.3% previously, when markets had been looking for growth to hold steady at the earlier level. That's a post-crisis record.

This means after taking inflation into account, weekly pay packets grew by 1.1% to £464, up £6 from £458 per week previously, which is the fastest pace of growth seen since late 2016. However, "real pay packets" are still below the £473 per week pre-financial crisis high seen in September 2007.

Wage packets are rising because a tightening labour market has put employers under mounting pressure to raise pay in order to retain or attract staff, a practice which is increasingly drawing the attention of policymakers.

"This should be a boon for demand, and with annual pay growth already well above the 2.75% the Bank expected in Q4 2018, we doubt that the Monetary Policy Committee would wait long to increase interest rates if and when a resolution to Brexit is reached," says Andrew Wishart at Capital Economics. 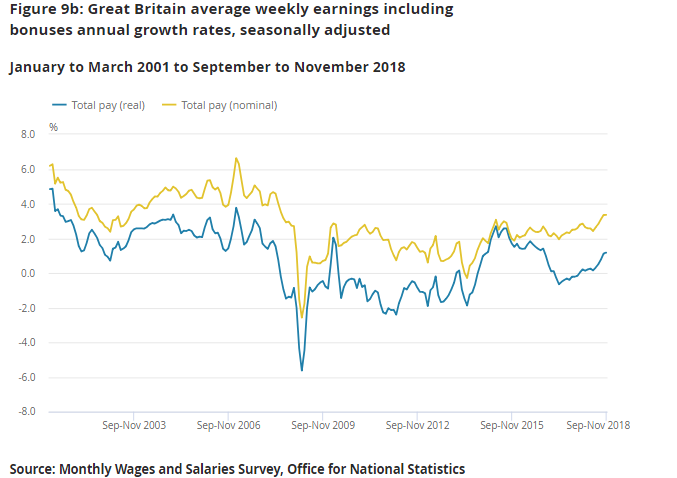 Above: UK wage growth in nominal and real terms.

Unemployment fell back to 4% during November, its lowest level since the middle of the 1970's, despite an increase in the so-called participation rate during that drove the number of people classed as unemployed higher by 8,000 for the recent quarter.

There were 1.37 million people classed as unemployed at the end of November, up 8,000 on the June-to-August period but down 68,000 when compared with November 2017.

Around 91,000 people were made redundant during the survey period, little changed from the June-to-August months but down 19,000 from 2017 levels.

There were 8.65 million classed as economically inactive, 100,000 fewer than in the June-to-August period and 86,000 less than one year ago. These are people who are not available to work, or who aren't looking for work.

"The labour market data for November was reassuring, showing no sign of any hit to firms’ hiring ambitions due to Brexit," says Wishart. "More timely surveys of hiring suggest that employment growth will maintain the annual growth rate of 1.0% recorded in November." 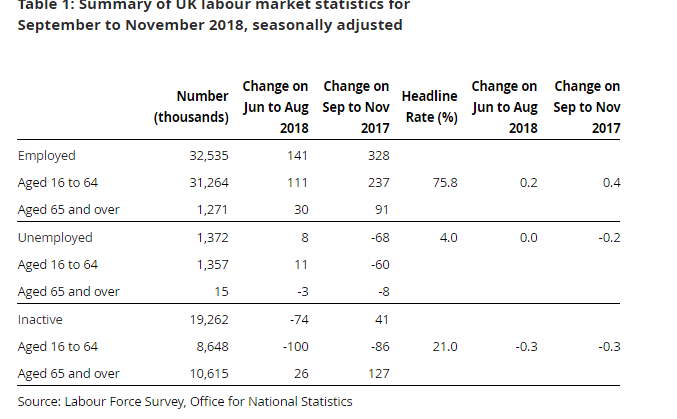 Markets care about the data because of the impact wage growth has on inflation and expectations for price pressures further down the line. It's inflation that central banks are attempting to manipulate when they tinker with interest rates.

Changes in rates are normally only made in response to movements in inflation but impact currencies because of the push and pull influence they have on capital flows, as well as their allure for short-term speculators.

The Bank of England (BoE) has said repeatedly that rising wages will put upward pressure on the consumer price index over the coming years and that it will need to raise interest rates in order to keep inflation close to its target level.

"The chances of the MPC raising Bank Rate in February are remote, but the Committee will want to signal strongly that another hike is not far off and that it could hike before Britain has left the E.U., given the risk that the departure could be delayed beyond March," warns Pantheon's Tombs.

UK unemployment has fallen from 5.1% at the beginning of 2016 and wage growth has picked up from 2.1%, as healthy levels of continued economic growth have  helped the labour market to tighten.

Economists currently anticipate the Bank of England will raise its interest rate once per year until the end of 2020 and the bank's own forecasts from its November inflation report are hinged on it hiking the base rate at least once, taking it up to 1%, during the 2019 year.

However, the bank is seen sitting on the sidelines until the outcome of the Brexit process becomes known, likely in March 2019, given that will also have a material impact on the outlook for inflation.

If the UK leaves the EU without a formal agreement in March, inflation could rise due to weakness in exchange rates. However, forecasts for growth would take a knock given this would involve some amount of tariffs and non-tariff barriers.

And the resulting lower economic growth could undermine future levels of inflation. As a result, an exit from the EU on World Trade Organization (WTO) terms could easily see the BoE deterred from raising its interest rate.

However, economists say that if parliament does eventually approve Prime Minister Theresa May's contentious Brexit proposals then they would likely upgrade their forecasts for the economy, including their projections of inflation. That could act as a catalyst for an interest rate rise as soon as April 2019.

PM May's European Union Withdrawal Agreement and any adapted proposals will go up for a second vote at the end of January. Securing some form of agreement to keep commercial borders open is neccesary if politicians wish to avoid defaulting to a WTO rules-based trade relationship.