The public finances improved notably in November but the economy is still on course to slow again for the 2018 year, according to multiple economists.

The Office for National Statistics (ONS) said UK government borrowing was £7.2 billion in November, down £0.9 billion from the same period one year ago and the lowest November borrowing figure for some 14 years.

Borrowing for the 2018 year-to-date was £32.8 billion, down £13.6 billion from one year ago and the lowest year-to-November number for 16 years, largely due to stronger tax receipts at the Treasury.

The Office for Budget Responsibility (OB)R said back in November that borrowing would be around £25.5 billion this year, and the national debt would likely be around 83.7% of GDP for 2018 overall.

It forecast borrowing would decline steadily over the coming years, although that's because the economy is expected to grow faster than the debt. Debt will still grow over coming year, not fall.

"Excluding tobacco duties, total [tax] receipts rose by a healthy 5.4%, above the 4.6% average rate so far this year. Accordingly, we must concede that the public finances aren’t flagging up the slowdown indicated by the latest monthly GDP data and business surveys," says Samuel Tombs, chief UK economist at Pantheon Macroeconomics. 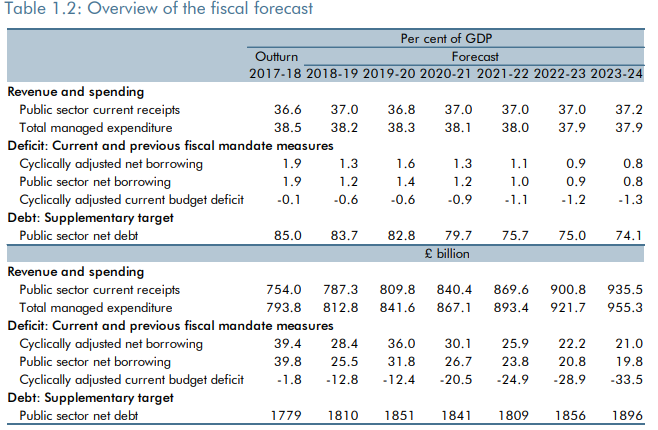 Above: Office for Budget Responsibility forecasts for the public finances.

The ONS also confirmed that the economy grew by 0.6% during the three months to the end of September, with the services sector having led the way.

Household consumption was also strong during the period and the ONS' earlier estimate of the third-quarter decline in business investment was revised lower by a touch.

"GDP growth in Q3 included the bounce back from the weakness generated in Q2 by the severe weather. The softness of retail sales and the activity PMIs in more recent months suggests that growth will return to the rates of 0.3-0.4% q/q seen for much of the previous year," says Paul Dales, chief UK economist at Capital Economics.

However, after a dire first quarter that was induced by poor weather in February and followed by an uninspiring second quarter, official data suggests the economy is still set to slow this year.

Consensus among economists is pointing to GDP growth of a paltry 1.3% for 2018. With the economy up 1.1% for the year at the beginning of the final quarter, that conensus could yet prove too pessimistic, although a repeat of 2017's 1.7% expansion would still be a tall order.

"The recent deterioration in business and consumer surveys, together with timely official data, suggests that Q3’s strong growth rate hasn't been sustained in Q4; we look for a mere 0.2% increase," says Pantheon's Tombs. 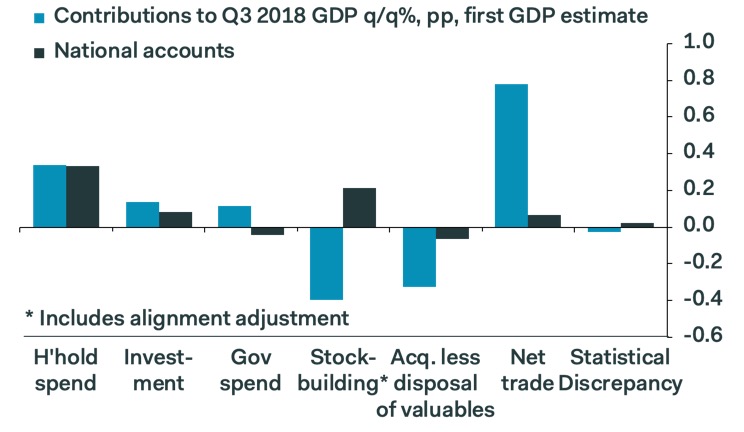 Finally, and on the downside, the UK current account deficit widened to -£26.5 billion during the third-quarter, up from -£20 billion previously and far higher than the -£21.7 billion deficit anticipated by the market.

Currency markets care about the data as it paints a telling picture of international demand for a currency and provides insight into the extent to which a nation is exposed to the changing sentiments of investors.

All main components of the current account balance worsened during the recent quarter, although the greatest contribution to the deterioration coming through the primary income balance.

The primary income deficit widened by £3.6 billion to -£11.1 billion after an increase in profits earned by foreign investors holding UK assets saw the nation's liability to the rest of the world rise.

Rising returns could be a good omen for future investment flows into the UK, which would be positive for growth in turn, but they are a net-negative for the current account balance.

Profits earned by UK investors in other countries were unable to offset the increase going the other way, leading to a deterioration of the primary balance.

"The U.K. is heading into a political crisis with a large external deficit and a huge stock of debt, equal to 522% of GDP, that is owed to overseas residents. In the event of a no-deal Brexit, sterling would fall a long way before it found a floor," says Pantheon's Tombs. 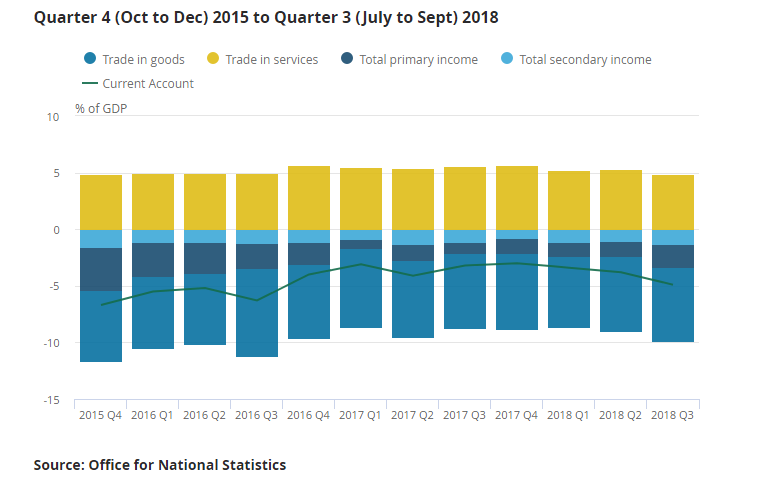