- Wages grow at fastest pace since 2010 as labour market tightens.

The labour market remained in rude health during October, keeping the unemployment rate close to a multi-decade low and helping to lift the rate of wage growth to its highest level since April 2010.

UK employment and unemployment both increased during the three months to the end of October, according to Office for National Statistics data released Tuesday, while economic inactivity decreased.

The number of people in work rose by 78,000 during the period, leaving a total of 32.48 million employed, which helped keep the unemployment rate steady at 4.1%. This is close to its lowest level since the early 1970's.

That helped push the average rate of wage growth to 3.3% when bonuses are excluded from the calculations, up from 3% previously, presumably because the tight labour market is enabling new hires and existing employees to become more assertive about their pay requirements.

October's rate of pay growth is the fastest seen in the UK since April 2010 and, given the number of new job vacancies remains close to a record high, economists anticipate it will rise further over coming months. 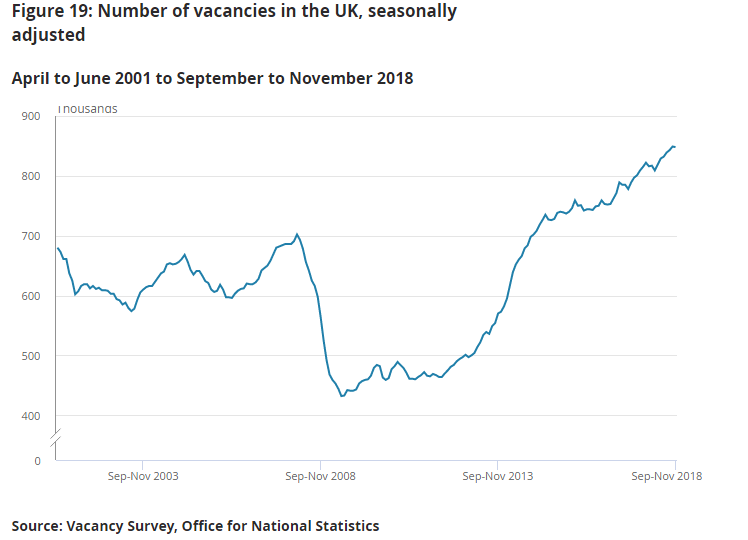 Above: Office for National Statistics tally of job vacancies.

That could soon draw the scrutiny of the Bank of England (BoE), given it has long warned about the inflationary threat posed by higher pay for workers.

"Encouragingly, the tightness of the labour market now seems to be feeding through to pay growth, providing us with optimism that sustained rises in real wages are now in prospect," says Ruth Gregor at Capital Economics. "We remain confident that provided a Brexit deal is secured, a further rise in real earnings to spur a recovery in consumer spending growth next year."

However, despite faster wage growth, the number of individuals classed as unemployed rose by 20,000 to 1.38 million during the period. But the ONS says the number of redundancies was at a record low during October.

As a result, rising unemployment is almost certainly the result of an increase in the so-called participation rate, which rose as previously inactive workers flocked back to the labour force in October. 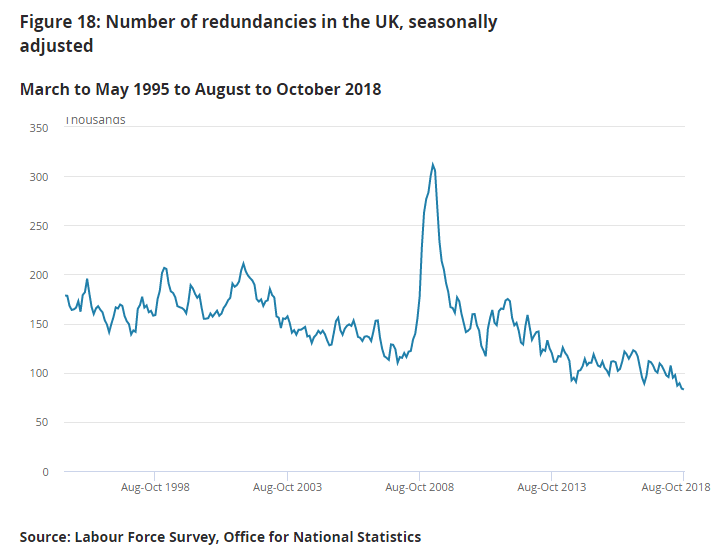 Above: Number of redundancies in thousands, as measured by the ONS.

There were 8.66 million people between the ages of 16 and 64 years old who were classified as economically inactive during the three months to the end of October, which is some 95,000 less than in the prior period and 195,000 fewer than for the same period one year ago.

The unemployed who are either not available for, or simply not seeking work, are always classed by the ONS as being 'economically inactive' rather than simply 'unemployed'. When those individuals eventually find their way back into the labour force to begin looking for work they are then classed as unemployed, which can impact the unemployment rate.

"The UK labour markets is showing real signs of tightness. After several years in which unemployment has fallen further than we, the market, and the BoE had anticipated, recent developments in the labour market suggest the UK is finally approaching full employment," says Kallum Pickering, a UK economist at Berenberg Bank. 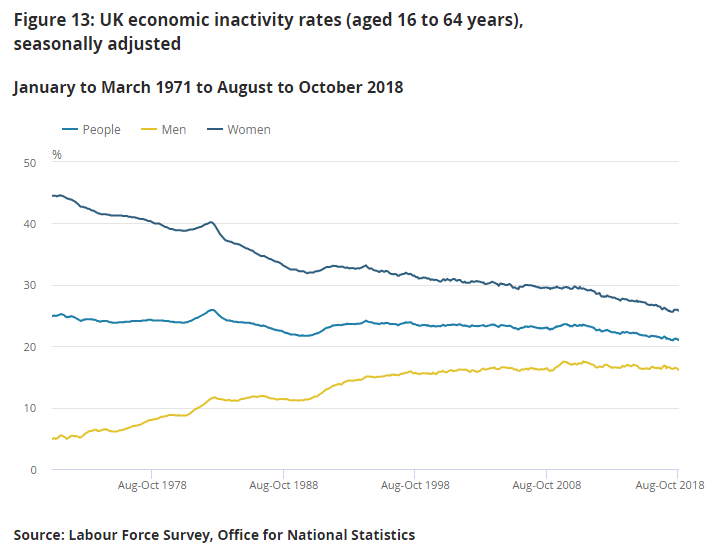 Above: UK economic inactivity rate as measured by the ONS.

"While the Bank of England will welcome another great month for UK wage growth, concerns surrounding Brexit will dominate the economic outlook over the winter," says James Smith, an economist at ING Group. "The chances of a second-quarter rate hike are fading rapidly.

The BoE has already raised its interest rate twice inside the last year, taking it up to 0.75%, and markets currently see the bank raising rates around once every year until 2021.

However, most analysts say the next move is unlikely to come before the U.K. leaves the EU in March 2019, given uncertainty over the final outcome of negotiations and their potential impact on the economy.

"The data continues to support our view that, despite heightened uncertainty linked to Brexit, the steps towards policy normalisation that the BoE has taken so far have been appropriate and that going forward, as long as the UK avoids a hard Brexit, the BoE will need to speed up the pace of normalisation in the coming years," says Berenberg's Pickering.

All of the recent data emerging from the UK points to a soft finish to 2018 for the economy, which has done little to improve an interest rate outlook that has been darkened by persistent uncertainty over the path toward Brexit.

Above: Three-month growth rate for output from UK manufacturing sector.

The market-implied Bank Rate sits below the current cash rate of 0.75% all the way out until May 2019, suggesting investors are increasingly contemplating the odds of an interest rate cut being delivered over the coming months.

Previously, at the beginning of October, it was only the November and December months that coincide with a UK parliamentary showdown over Brexit legislation where the implied rate was beneath the actual cash rate.

However, following a two-month period during which news emerging from the UK has turned more and more negative, it is now November 2019 before the next Bank of England interest rate rise is fully priced into markets.

"If there were a “no deal” Brexit, we estimate a hit of between 1 and 3ppts to consumer spending growth in 2019," warns Capital Economics' Gregory. 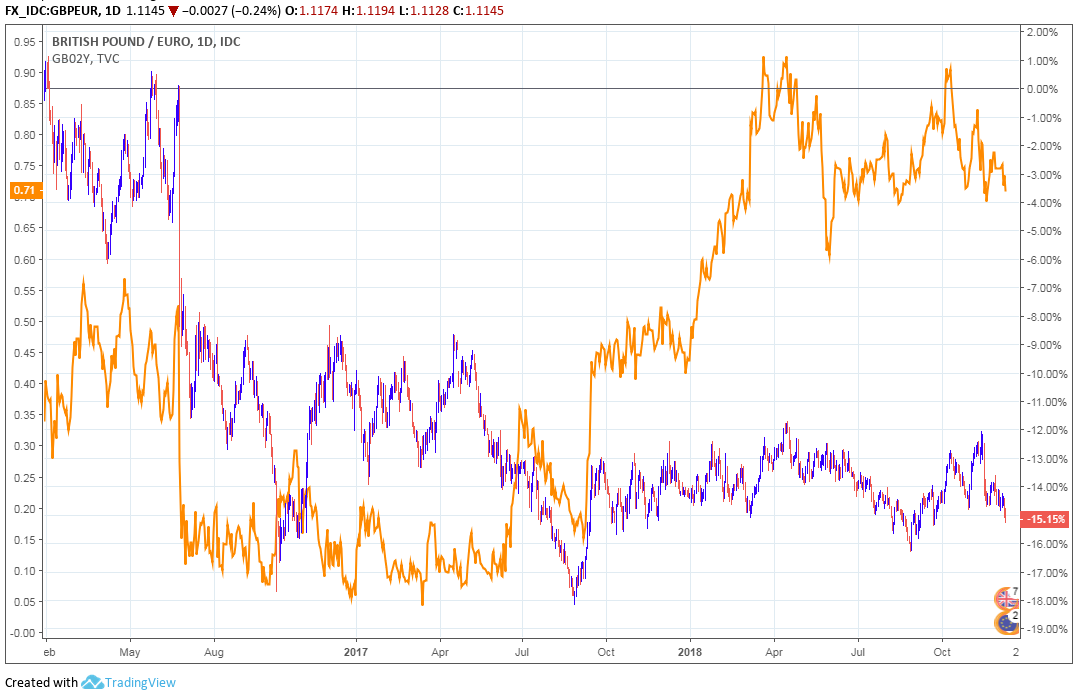 Only a resolution of the Brexit saga can bring those implied rate rises, and their likely positive impact on the Pound, forward from where they were on Tuesday morning. But Prime Minister Theresa May has now cancelled a parliamentary ballot on her Brexit deal for fear of suffering a punishing defeat.

Negotiators have returned to Brussels to renew talks about aspects of May's deal in the hope of securing terms more palatable to parliament.

"Whichever way Brexit pans out, the one thing that looks more certain is that the Parliamentary vote may not happen until much further into the new year. For the economy, this greater uncertainty is likely to see an increased number of firms enacting contingency plans, or at the very least holding back on investment and hiring," says ING's Smith.