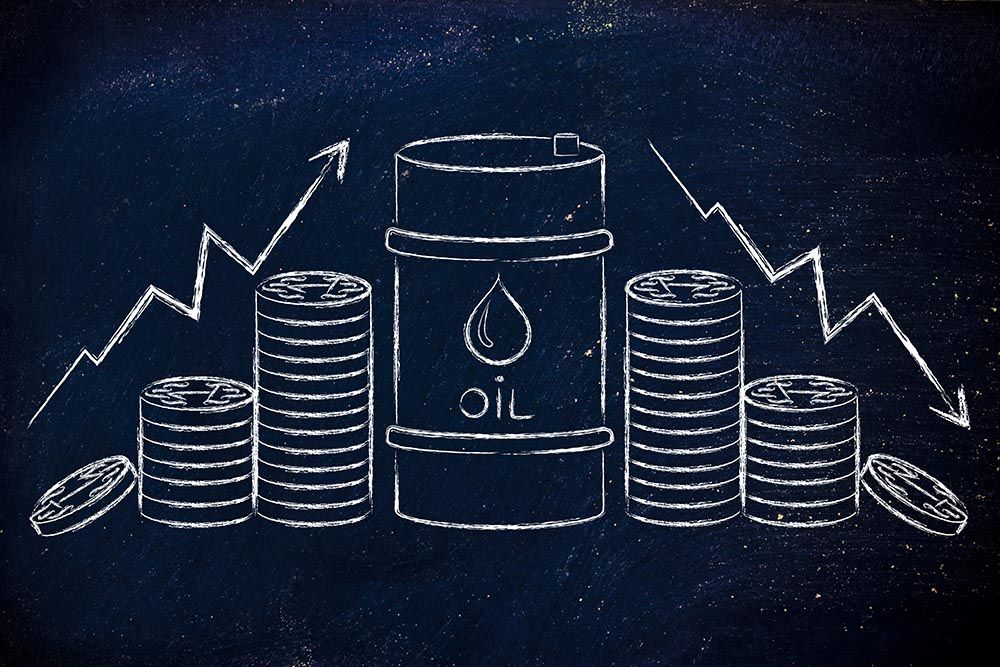 - But UBS and TD Securities say this rout's days are numbered.

The global oil market has gone from boom to bust all within the space of a month and the outlook for prices has deteriorated markedly, with significant positive and negative implications for economies the world over.

Oil-producing countries like the United States will draw little benefit from collapse but importers such as the U.K., France and Germany as well as many emerging market nations will gain economically from the recent developments.

"While the eurozone economy would be particularly vulnerable to a sizable slowdown in China, it stands to gain more from less elevated oil prices. Unlike the US, the eurozone is not a major oil producer itself," says Holger Schmeiding, an economist at Berenberg Bank.

WTI oil, the U.S. benchmark, has fallen by a similar degree from $76 per barrel last month to just $50 this week and now also carries a double-digit 2018 loss.

Concerns about the global economic outlook and sanctions waivers for some countries buying Iranian oil have played their part in taking wind from the market's sails, but the most significant driver was the White House on Tuesday.

"Saudi Arabia — if we broke with them, I think your oil prices would go through the roof. I’ve kept them down. They’ve helped me keep them down. Right now we have low oil prices, or relatively. I’d like to see it go down even lower — lower," President Donald Trump told reporters at the White House Tuesday.

The White House has been under pressure to respond more forcefully to allegations Saudi Crown Prince Mohammad bin Salman ordered the extrajudicial and extraterritorial execution of journalist Jamal Kashoggi, who has been described by Saudi Arabia as an "enemy of the state".

Trump has frequently hit out at Saudi Arabia and the Organization of Petroleum Exporting Countries (OPEC) over their efforts to manipulate oil prices in favour of producer nations, which could've led traders to conclude he's struck a deal with Saudi Arabia trading protection of the Prince for lower oil prices.

"The market linked the two and is, reasonably, now risking the effectiveness of a Saudi led OPEC cut," says John Rigby, an analyst at UBS, in a note to clients.

Rising oil prices benefit producer nations by driving up export revenues and supporting economic growth, among other things. But they're a headwind for everybody else because they lift inflation, which reduces growth if there is not a concurrent pickup in activity within an economy.

Higher inflation can also lead central banks to raise interest rates, which lifts mortgage and other debt costs for households as well as companies. That can lead to slower rates of economic growth too. Eurozone inflation rose from 1.3% in January 2018 to 2.2% in October, as energy prices rocketed along with the double-digit increase in oil during that time.

"Crude oil fell into negative territory for the year after six weeks of consecutive declines, as statements from President Trump created continued uncertainty with regards to the potential OPEC+ production cuts necessary to address the pending surplus— But, OPEC cuts in December still in the cards and so are higher prices," says Bart Malek, head of commodity strategy at TD Securities.

Oil prices collapsed from $114 per barrel in 2014 to little more than $20 in the first-quarter of 2016 due to a glut of supply on global markets. Since then members of the OPEC organization and Russia have colluded to force prices back up, using co-ordinated cuts to production levels across the entire bloc.

Both UBS and TD Securities say the bottom likely fell from the market because traders have concluded that President Trump is using the Kashoggi scandal to strong-arm Saudi Arabia into minimising future production cuts and ultimately reducing oil prices. But both also say the price rout's days are numbered.

"As we move into 2019, Brent should trend into high $70s territory and WTI to the high $60s. But before going long again, we will need to see macro risks moderate and the trend shift upward," Malek says.

Malek wrote to clients earlier this week to say that OPEC is still likely to go ahead with another large production cut in December and that U.S. sanctions against Iran will eventually drain even more oil supply from the market, leading to higher prices once into 2019. UBS's Rigby is of a similar view.

"One of our long-stated downside price risks has been Saudi losing leadership of a hitherto effective supply side management (leading prices down to $60/bbl), and this appears to be playing out," Rigby told clients this week. "What is different this time is it is coming against the backdrop of low spare capacity and 4 years of sub-trend investment. Therefore a scenario of lower than $70bbl should not be ruled out but we suspect the associated price rebound will be sooner and more vicious."