- Franc is having a strong week owing to trade tensions

The British Pound is outperforming its peers on Wednesday, December 04., but a look at the charts suggest the currency has more work to do if it is to establish a bullish setup against the Swiss Franc.

The Pound-to-Franc exchange rate is presently quoted at 1.2911, a sizeable 0.75% higher than where it started the day.

Such a large move would often be expected to suggest a breakout is underway, which would in turn pose the potential for further upside. However it must be noted that the 0.75% gain we are seeing now is still not enough to counter the 0.85% decline witnessed on Monday when GBP/CHF fell from 1.2926 to 1.2820.

If we look at the below chart we can potentially draw two conclusions regarding the near-term outlook, that would cover the days leading into the UK General Election on December 03. 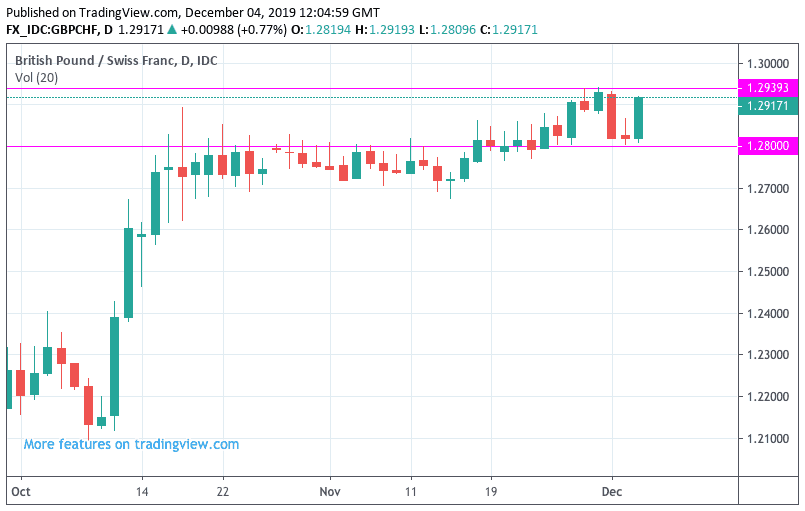 The first is we have a decent near-term level of support at the round-number of 1.28; we have seen Sterling find a bid here over recent days, and we would therefore look for any future weakness to fade here.

To the topside, we will be keeping an eye on resistance around 1.2940, we would first look for strength to fade here, but any successful break could well reinvigorate the medium-term rally.

The Pound has been rising against the Franc since August, in sympathy with the broader rally in Sterling. We would however suggest only a decisive win for the Conservatives at the General Election would provide the impetus required to break GBP/CHF out of this range.

A hung parliament would meanwhile potentially break that support at 1.28 we spoke about earlier.

The Swiss Franc has been an outperformed at the start of December, with the currency finding a bid on renewed trade war fears.

This week has seen U.S. Commerce Secretary Wilbur Ross say a trade agreement in 2019 is now unlikely, while President Donald Trump warned a deal might not be possible until after the U.S. election next year.

"The combination of worryingly weak data on Monday and a clear deterioration of sentiment around the state of play with US/China has proven a very toxic cocktail that has caused many to flock to the Franc," says a note from the JP Morgan foreign exchange dealing desk.

JP Morgan warn that should the U.S. decide to avoid placing tariffs on Chinese imports on December 15., "it would be a relief at this stage and would likely cause at least a temporary selloff in the Franc."

Foreign exchange analysts at Citi are meanwhile expecting the current impulse of Franc strength to be something of a near-term phenomenon, as they expect the currency to steadily weaken over coming months, courtesy of SNB interest rate cuts.