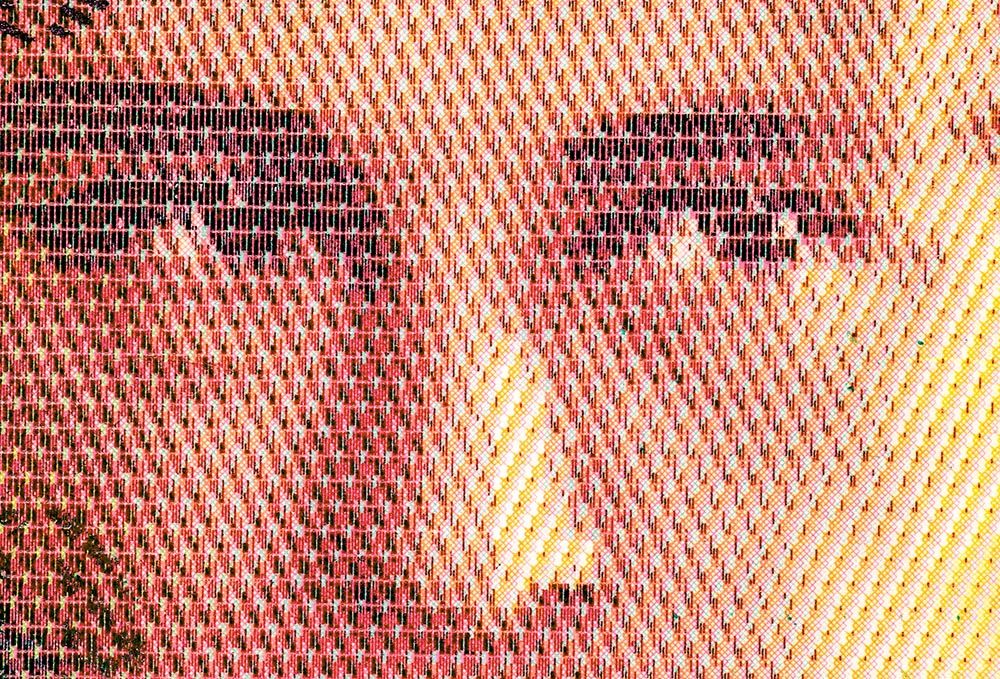 - Break above rally high would open up more upside

The Pound-to-Franc exchange rate is trading at around 1.2334 at the time of writing after falling 2.00% last week and studies of the charts suggest a continuation of the new uptrend, subject to a break above recent highs.

The 4 hour chart - used to determine the short-term outlook, which includes the coming week or next 5 days - shows how the pair has established a new uptrend and at the same time formed a ‘measured move’ price pattern higher. 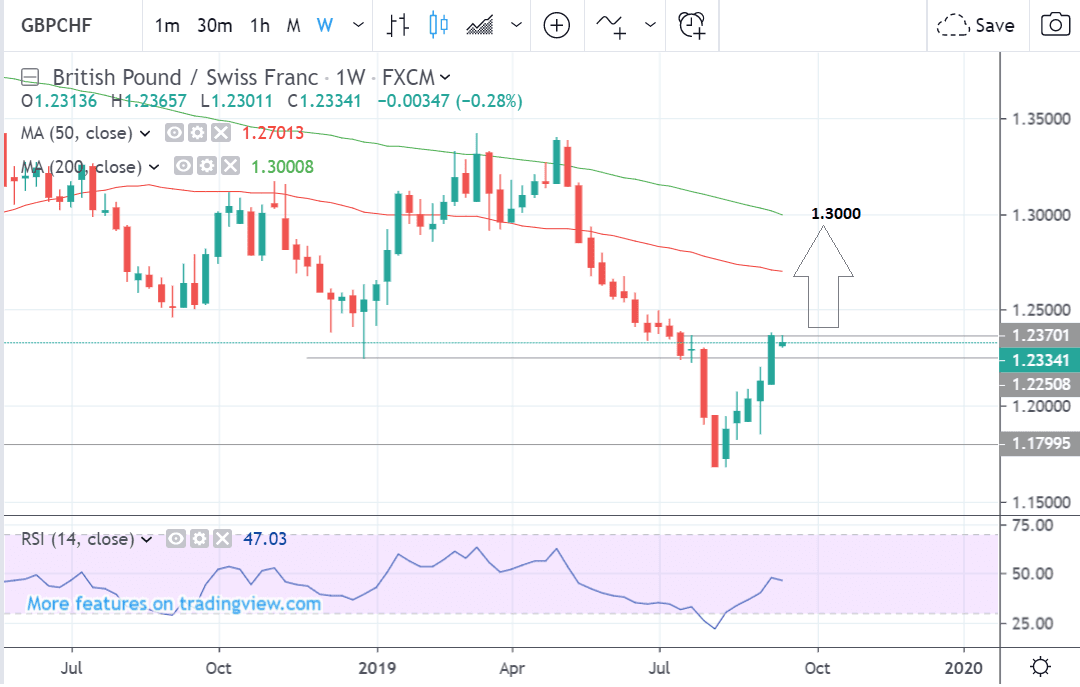 The ‘measured move’ looks as if it may now have completed after extending the final C-D wave to the same length as the A-B leg - a sign it has probably extended to its maximum length.

There is a strong probability we may now see a temporary pull-back down into the 1.22s before the pair continues higher, as traders bank profits from the rally represented by the measured move.

The daily chart shows how the pair has touched mild resistance at the July 25 highs at 1.2370 from which it may pull-back temporarily before continuing higher eventually. 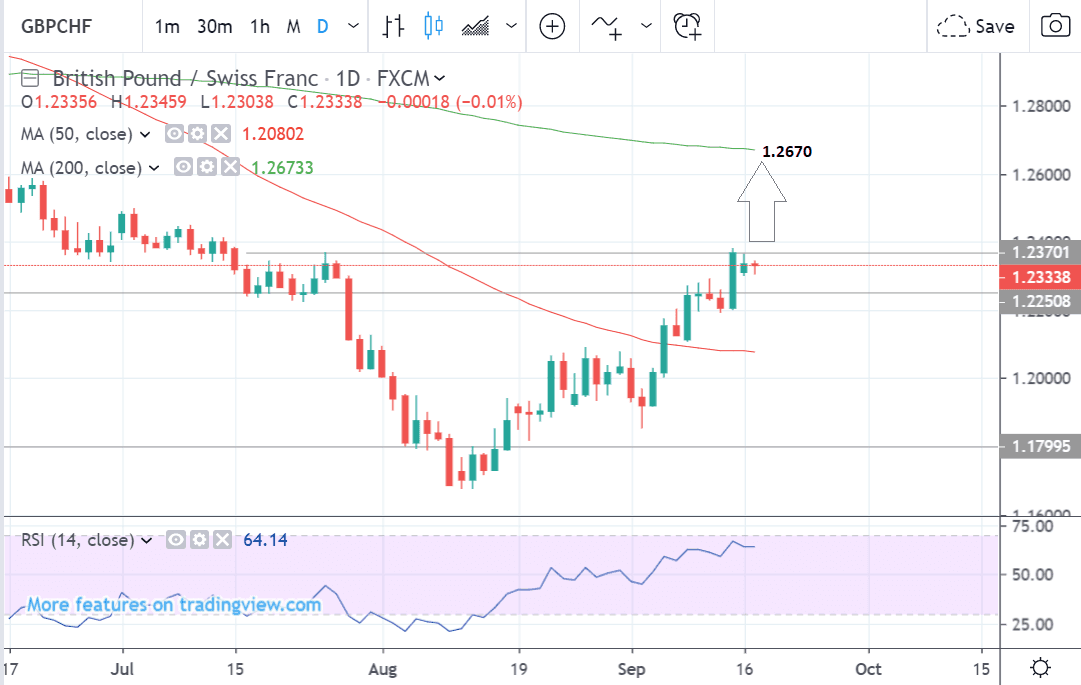 It is possible the uptrend could extend, conditional upon a break above the 1.2383 September 13 high. Such a move would probably continue up to a target at 1.2670.

The weekly chart shows how the pair has been rising for 5 consecutive up-weeks in a row since bottoming in August. The current week is also showing gains and the short-term picture looks constructive.

In the absence of any bearish signs, the trend could extend and over the long-term rise up to a target at the 1.3000 level and the 200-week MA.

The weekly chart is used to give us an indication of the outlook for the long-term defined as the next few months.

The Swiss Franc: SNB Ahead but Risk Trends to Remain in Control

The main drivers of the Swiss Franc on the horizon include shifts in global investor risk appetite and the meeting of the Swiss National Bank (SNB) on Thursday.

The Swiss Franc is a safe-haven currency which investors tend to gravitate to when there is a crisis. The currency rose at the start of this week after the news of a drone attack on Saudi oil fields cut half the country's production over the weekend.

The attack impacted both the price of oil and global financial markets in general. Oil spiked higher by as much as 20% and risk assets sold off.

Higher oil prices also generally dampen global growth as they raise base costs so if prices continue to rally they will weigh on sentiment and support the Franc.

There is a fair risk of the crisis continuing and the Franc gaining as a result, according to analysts.

“Reports suggest less optimism that Saudi Arabia can rapidly recover lost oil production and it will likely take weeks or months before the majority of output is restored. The combination of a longer than expected return to full Saudi oil production and the lingering threat of an escalation of Middle Eastern tensions, with possible US retaliatory action, is likely to see a sustained period of higher oil prices,” says Jason Wong, analyst at BNZ.

The other main event for the Franc is the meeting of the SNB on Thursday at 8.30 BST.

The Swiss Franc could fall if the SNB follows the European Central Bank (ECB) in cutting interest rates as this is a common occurrence.

Lower rates are negative for a currency as they reduce net foreign capital inflows.

“A surprise is also possible from the Swiss National Bank as policymakers might find it hard not to resist following the European Central Bank in cutting rates further below zero,” says Raffi Boyadijian, an investment analyst at FX broker XM.com. “The SNB has kept its policy rate at -0.75% since the end of 2014 and even though market expectations have receded slightly, there’s a chance there will be a cut to -1.00%.”

With tensions in the Middle East pushing the Swiss Franc even higher the chance of a cut has risen as the SNB may be seeking ways to depreciate the currency.

The SNB often has to struggle against a strong Swissie which often gains from safe-haven flows which distort its value.

This is negative for Swiss exporters and the economy because it makes their products increasingly expensive and uncompetitive.