- The pair will probably rise to retouch the 1.84 highs

- Canadian growth data dominates the calendar in the week ahead

One Pound buys 1.8216 Canadian Dollars on the inter-bank markets at the start of the week, this is less than the monthly high of 1.8413 achieved in the week prior.

Nevertheless, our technical studies of this particular market confirms Sterling does appear to be favoured against the Canadian Dollar, GBP/CAD is rising in a strong bullish trend which is overall likely to extend in the future.

It recently broke above several key levels including the 200-week MA and the May highs and the fact it managed to do so relatively easily is testament to the strength of the uptrend.

Of late the pair it has pulled-back a little, however, falling for four out of the last five days, from a peak at 1.8415 to the current exchange rate at 1.8222. 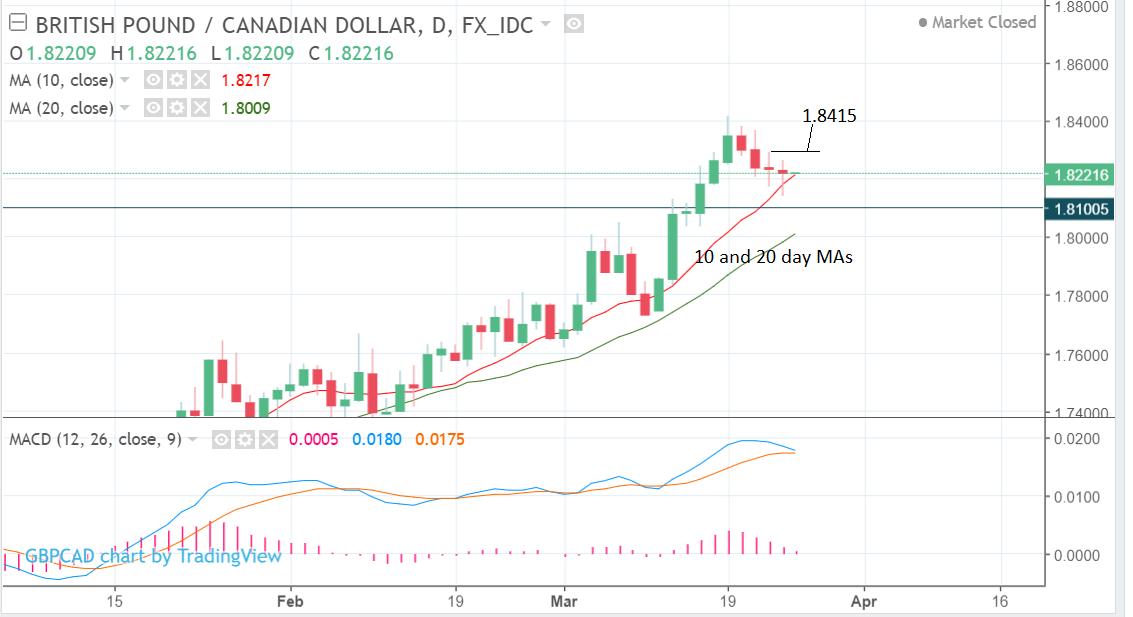 The pair is also currently trading in between the 10 and 20 moving averages (MAs), which is seen by some analysts as the perfect 'buy zone' for joining an uptrending asset.

The formation of a bullish reversal candlestick pattern in the buy zone would provide added confirmation that the pair was resuming its uptrend and going higher.

This debatably may have already have happened on Friday when the pair formed a doji/hammer candlestick formation in the buy zone, although the colour of the candlestick was red which means it was not a strong bullish sign.

Nevertheless, there is now the possibility that GBP/CAD could start going higher, and a break above Thursday's highs at 1.8295 would, in our view, provide confirmation that the exchnage rate was resuming its uptrend, with an initial target at the previous 1.8415 highs, followed possibly by 1.8500 which is a place many traders will take profit as it is a major round-number.

Data and Events to Watch for the Canadian Dollar

The main release for the Canadian Dollar in the week ahead is GDP for January, which is out at 13.30 GMT on Thursday, March 29.

Canadian GDP rose 0.1% in December and it is expected to rise by the same amount in January.

All the other important releases for the Canadian economy are out at the same time as GDP, including producer prices, which are forecast to rise 0.5% in February from 0.2% in January, raw materials prices and then the budget balance at 17.00.

"The more significant interest for next week’s publication will come from the national accounts detail released at this time," says Investec of the GDP release. This will include revisions to data on household income and personal finances in general, which affect overall consumer spending, the biggest driver of growth for the economy.

Should growth be downgraded unexpectedly we would certainly expect a soggy end to the shortened week for the Pound.

Investec, however, sees a chance of a lift to -8 in March because of rising wages, less job uncertainty, easing inflation, the agreement of a Brexit transition deal and "the uncharacteristically “Tiggerish” Chancellor at his inaugural Spring Statement.