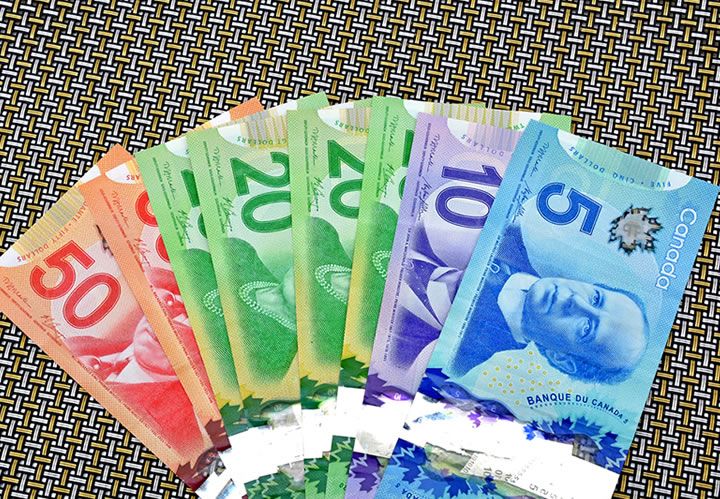 The Pound to Canadian Dollar rate is forecast to continue its journey south as oil-sensitive currencies dominate.

The best-performing currencies in the first half of this week are oil-sensitive ones - Mexican Peso (some politics here, too) Canadian dollar, Rouble and Colombian Peso.

Brent crude is just above USD 53/bbl, at its best level since June, thanks to news Russia will support a proposal by Opec to freeze oil production in order to reverse the slump in global oil prices.

"Russia is ready to accede to joint measures to reduce [oil] production, and is calling on other oil exporters to do so," said Russian President Vladimir Putin.

"We support the recent Opec initiative to set production limits," he added.

GBP/CAD trades at 1.6225 at the time of writing well below the close recorded on the day of the Great Sterling Flash Crash.

However, currency markets never move in a straight line and we have reason to believe the technical picture on the charts is actually surprisingly bullish.

October has seen the pair break to the downside after a multi-week period of consolidation which tends to end with a breakout.

That breakout has occured, or could still be in the process of occuring.

Subsequent price action formed a ‘Hammer’ Japanese candlestick pattern (circled below) with a long ‘wick’ or ‘tail’ when it broke down: 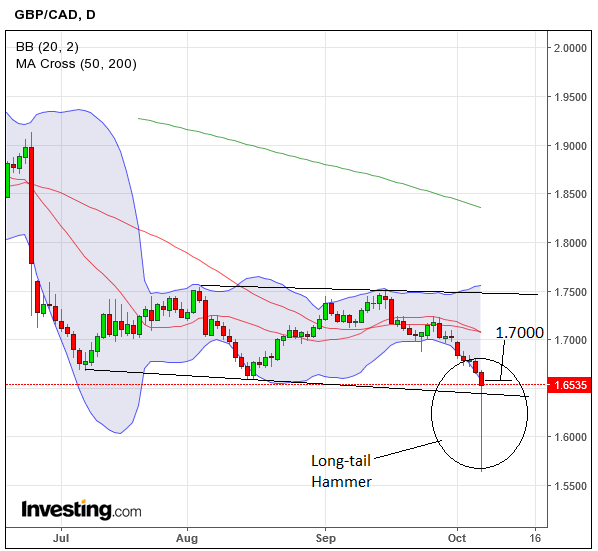 The candle has printed below the lower Bollinger Band, the light blue, shaded region around price, which increases the possibility it could be signaling the down-trend has reached an exhaustion point and therefore could be at risk of a reversal.

The Bollinger Band is an envelope around prices, calculated by taking the 20-period simple moving average and then marking two lines, one above and other below which sit at 2-standard deviations from the mean.

Theoretically, prices move within the bands for 95% of the time.

This means that when they stray outside there is a high probability that they will revert to the mean – or in layman’s terms move back inside towards the central area.

When a move outside the bands happens in conjunction with a long-tail hammer it increases the odds prices will move back inside the bands or even reverse trend.

These set-ups have a high probability success rate of reversal and a move above 1.6500 would probably lead to a move up to 1.7000

The Canadian Dollar starts the new week with a spring in its step thanks to better-than-expected employment data from Friday which showed a rise in September of 67.2k when only a 7.5k rise had been expected.

According to CIBC Market’s Jeremy Stretch, the rise was well above even the optimistic expectations of CIBC’s economists.

“As a consequence, they are looking for an above consensus 13k gain in employment, the market expects 7.5k, with the unemployment rate remaining at 7.0%,” said stretch in a preview.

In the end, the data came out even higher than CIBC's '13k' forecast.

Bank of Canada Governor Stephen Poloz’s ‘Lower for Longer’ speech was a game changer for both Canadian monetary policy and the CAD, as it put the possibility of further monetary policy stimulus back on the table, however, Friday’s positive employment data will have lessened bets of a further cut interest rates or some other stimulus measure being introduced; this is overall CAD-positive.

The pound, meanwhile, is at risk of further downside despite technical patterns indicating the possibility that the downtrend may be exhausted.

One explanation for the apparent contradiction between technical and fundamental may be that the pair has now priced in the possibility of a ‘hard Brexit’ – at least for now – so risks could be of a recovery rather than more downside.