"This report supports our view that the Bank of Canada will increase rates by 50 bps next week, before pausing in 2023," CIBC Capital Markets

Canadian employment growth slowed notably in November but it remained positive after the economy created some 10k new jobs for last month, down from the 108.3k created in October but in line with an economist consensus that suggested around a 10.5k increase would be likely.

"The employment data is notoriously volatile, and employment declines over the summer mean the average monthly increase over the last year still slowed to just 4k. But the details of the November report were reasonably solid," says Nathan Janzen, assistant chief economist at Royal Bank of Canada.

"Full-time job growth jumped by 51k. Gains were all in the private sector and among self employed - public sector employment declined by 25k. And the unemployment rate edged down to 5.1% from 5.2% in October and just slightly above the record low (since at least 1976) 4.9% rate in June and July," he adds.

Canadian employment growth may have decelerated rapidly in recent months but pay growth has remained resilient with average hourly wages of employees having risen by 5.6% during the year to the end of November, a level that is close to the rate of inflation in Canada. 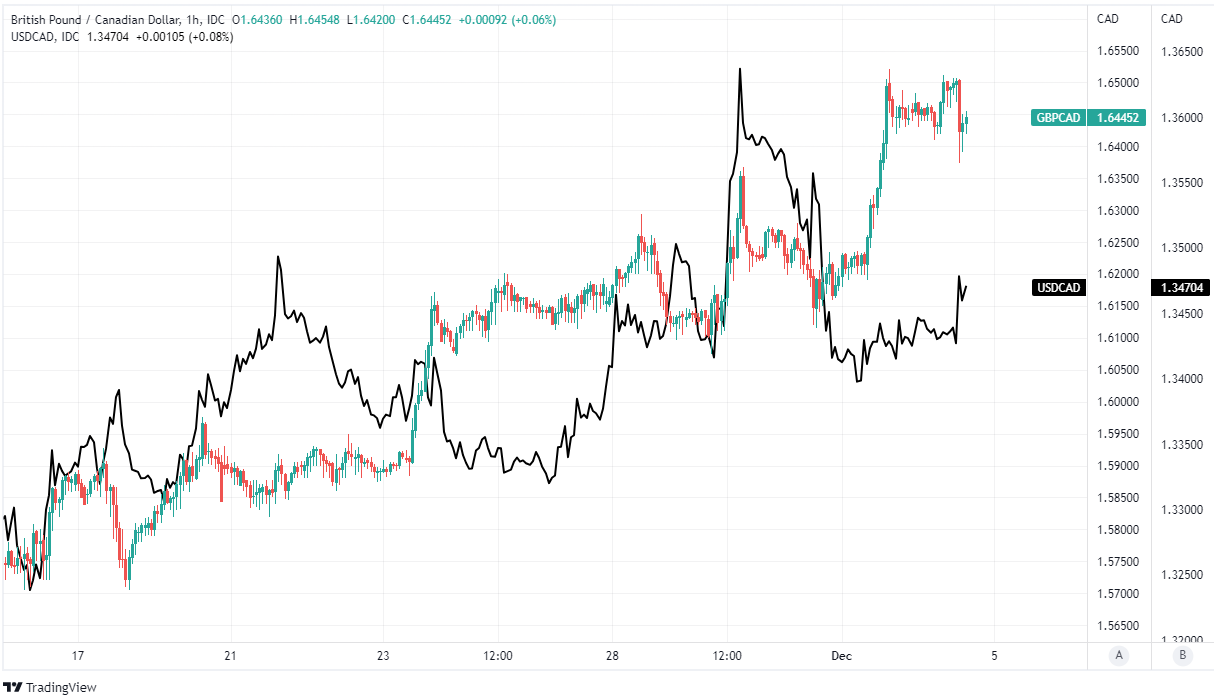 Above: Pound to Canadian Dollar rate shown at hourly intervals.

This reflects pay growth that will enable many Canadians to sustain their usual levels of spending even as prices rise, which is something the Bank of Canada (BoC) has been attempting to prevent out of concern that this could lead inflation to remain at multiples of the 2% target for an extended period.

Canadian inflation held steady at 6.9% in October while once volatile energy and food prices are removed from the data under consideration, the so-called core inflation rate dipped from 6% to 5.8%.

"Given still strong wage growth, the composition of job gains in November (mainly private sector and full-time), and the low unemployment rate, this report supports our view that the Bank of Canada will increase rates by 50 bps next week, before pausing in 2023," writes Karyne Charbonneau, an economist at CIBC Capital Markets, in a note to clients.

Above-target inflation and economic factors such as the resilient labour market are why the BoC has raised its cash rate aggressively this year and in a similar fashion to the Federal Reserve, which indicated in September that its Fed Funds rate could reach 4.75% early next year.

Meanwhile, the BoC raised its cash rate by three quarters of a percentage point last month to 3.75% and warned that while the end of its interest rate cycle might be approaching, further increases are likely to be announced before then. 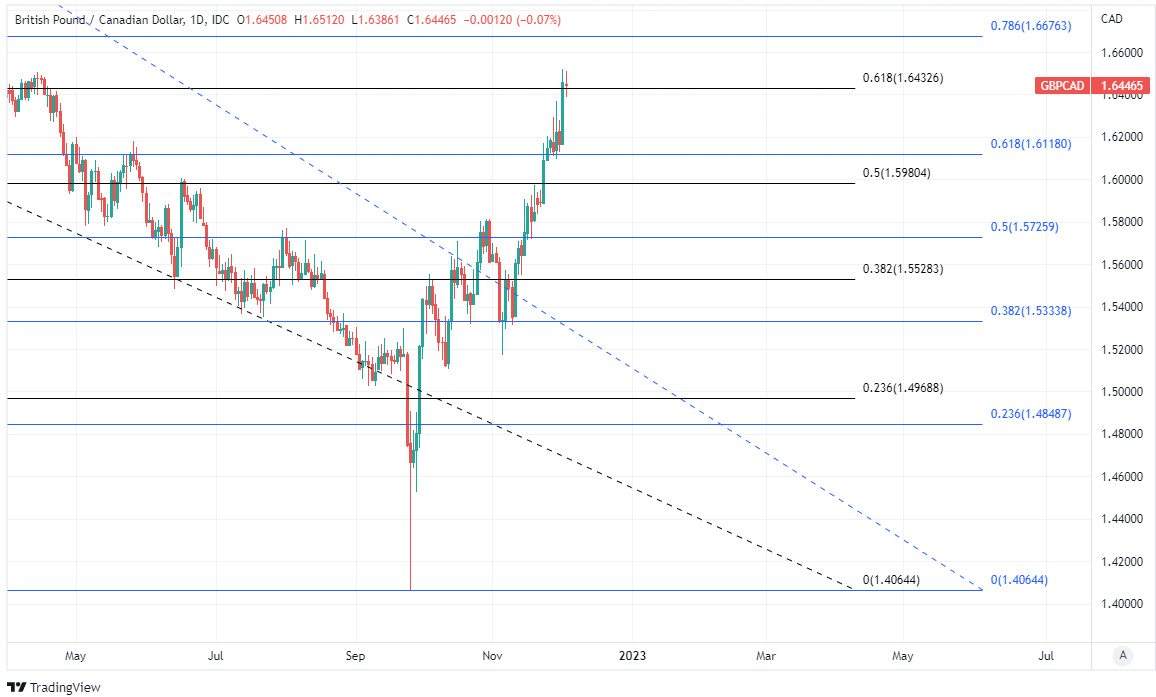 Above: GBP/CAD at daily intervals with Fibonacci retracements of February 2021 (black) and February 2022 (blue) downtrends indicating possible areas of technical resistance for Sterling. Click image for closer inspection. Click image for closer inspection. If you are looking to protect or boost your international payment budget you could consider securing today's rate for use in the future, or set an order for your ideal rate when it is achieved, more information can be found here.

The BoC has announced six increases in its cash rate since March 2022 including a singular 100 basis point increase in April that was its largest since 1998 and a 0.75% increase back in September.

"We may be in for a bumpy first few days of next week as we await the BoC's rate decision. We would still argue that it makes sense to get long the loonie on crosses prior to that, and to potentially fade USDCAD on any rally," says Greg Anderson, global head of FX strategy at BMO Capital Markets.

"This morning our rotating financial factor model for USDCAD has fair value in the pair at 1.3329," Anderson writes in a Friday market commentary.

November's employment data comes just days ahead of next Wednesday's final BoC interest rate decision of the year in which most economists look for the bank to lift its cash rate to either 4% or 4.25% in what could be one of the benchmark's final step higher.

Much about the outlook still depends, however, on trajectory of inflation over the coming months and on a Canadian economy for which the BoC downgraded many of its forecasts back in October. 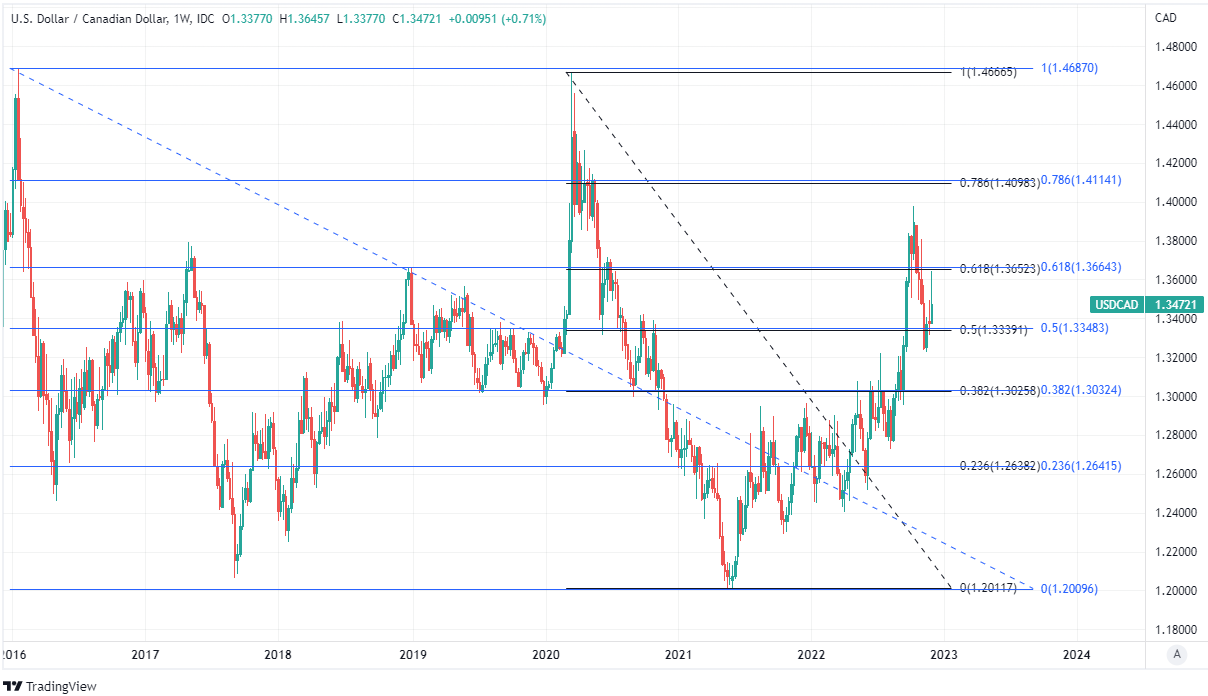 Above: USD/CAD shown at daily intervals with Fibonacci retracements of 2016 (blue) and 2020 (black) downtrends indicating possible areas of technical resistance for U.S. Dollar. Click image for closer inspection. To optimise the timing of international payments you could consider setting a free FX rate alert here.