The Pound to Canadian Dollar rate has reached four-month highs in recent trade but multiple technical resistances are obstructing its path higher on the charts and Thursday's Bank of England (BoE) interest rate decision is posing risks that could further frustrate its recovery in the days and weeks ahead.

Sterling has risen more than 10% against the Canadian Dollar since falling to all-time lows near the round number of 1.40 in late September and traded as high as 1.5811 last Friday but has been unable to sustain itself above a cluster of technical resistances littering the chart around the 1.57 handle.

"We continue to believe that GBP gains through 1.57/1.58 are needed to boost the GBP further in the short run but odds are tilted towards more GBP strength, we believe," says Shaun Osborne, chief FX strategist at Scotiabank.

"Weekly (bullish key reversal) and monthly (bull hammer) price signals strongly suggest that a major low was reached during the extensive and rapid slide - and the subsequent snap higher - in the pound through late Sep," Osborne wrote in a recent review of the Canadian Dollar charts.

GBP/CAD had reversed almost half of this year's double-digit percentage decline on Tuesday but with momentum having ebbed from the recovery, it may be most likely to consolidate recent gains ahead of a Thursday BoE decision that is also likely to bring with it the risk of a setback for Sterling. 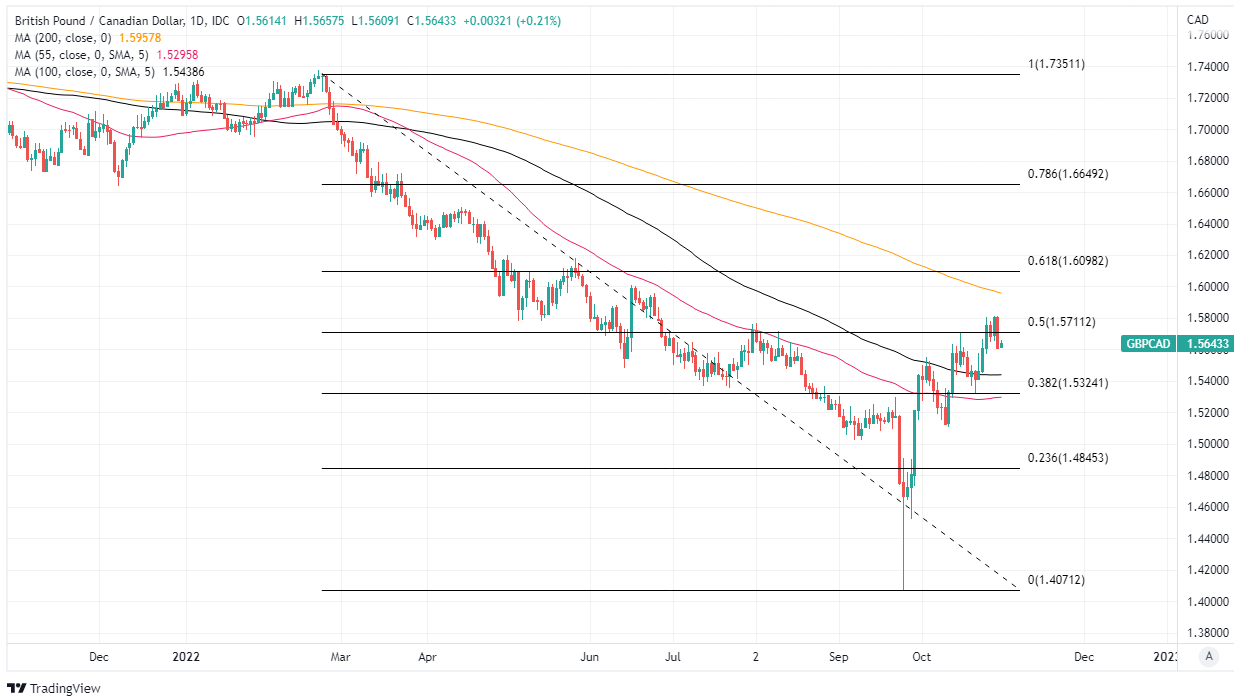 Above: Pound to Canadian Dollar rate shown at daily intervals with Fibonacci retracements of 2022 decline indicating possible areas of technical resistance for Sterling.

Thursday's BoE decision is the highlight of the week for the Pound and comes ahead of Friday's September employment report in Canada but poses risk to Sterling due to the deteriorating performance and prospects of the UK economy, which are at odds with commonly held views about the outlook for Bank Rate.

"We expect the BoE to hike Bank Rate by 75bp to 3.0% on 3 November. Similar to the September meeting, we expect to see a split vote, with at least two MPC members (Tenreyro and Dhingra) preferring a smaller increase," writes Anna Titareva, a European economist at UBS, in a Tuesday research briefing.

"We expect the updated MPC macro projections to show downgrades to growth and inflation. The key focus, however, will be the new medium-term inflation forecast based on market interest rate expectations, which we expect to show a level below 2%, thus signalling pushback against market pricing," she adds.

Economist expectations for the Bank Rate have followed market-implied measures of investor expectations higher in recent months and siginificantly so since the last forecast update in August when derivative markets were implying that UK interest rates would rise to almost 3% this year. 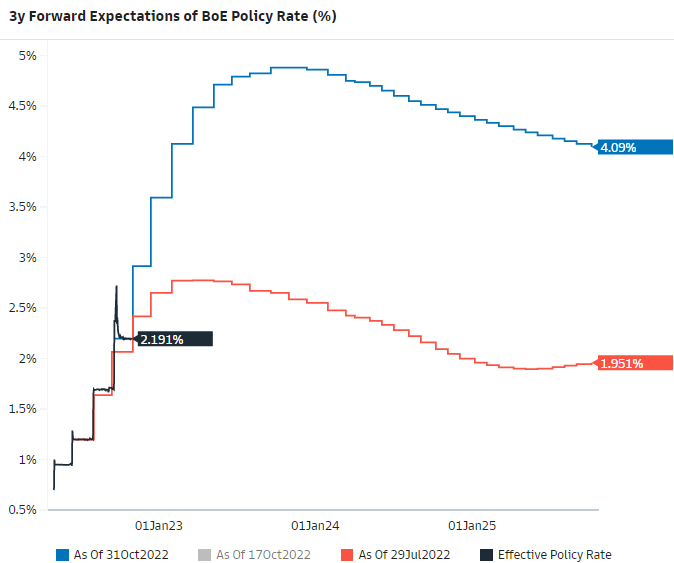 The BoE's August projections implied that this kind of increase in borrowing costs would be likely to weigh heavily on the economy and ultimately push UK inflation rates some way below the targeted 2% level in the years ahead.

However, since then economists and markets have raised their expectations for Bank Rate even further while the UK economy has itself underperformed earlier BoE forecasts, meaning there is potentially a high risk of a market disappointment and upset for Sterling on Thursday.

"In line with the fall in market expectations, we now look for the BoE to hike by 75bp to 3.0%, down from our previous call of 100bp. We continue to forecast a 50bp hike in December," says Kallum Pickering, a economist at Berenberg. 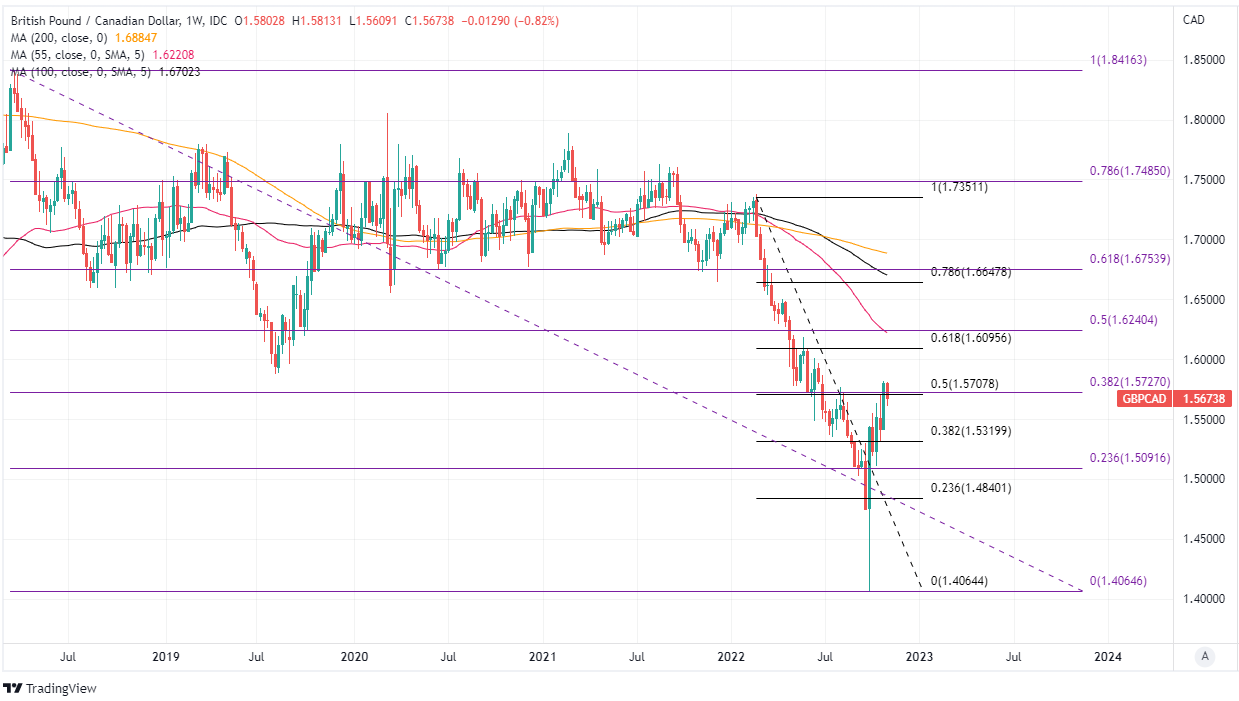 Above: Pound to Canadian Dollar rate shown at weekly intervals with Fibonacci retracements of 2022 decline and 2018 trend lower indicating possible areas of short and medium-term technical resistance for Sterling.

The size of the immediate increase in Bank Rates is one source of risk for Sterling but the BoE's latest forecasts will be scrutinised closely too as they can imply things about the extent to which the bank might be likely to disappoint the market in subsequent months.

But with Pound to Canadian Dollar rate already having stalled in its recovery the bigger risk this week is of a corrective setback for Sterling on Thursday, which would leave much about the short-term outlook to be determined for GBP/CAD by Friday's Canadian employment figures.

These will be scrutinised closely for what they might imply about the outlook for a Canadian economy that has proven more resilient than some economists had anticipated over recent months but which was projected last week, by the Bank of Canada (BoC), to slow or perhaps even contract over the coming quarters.

"The trend has been towards lacklustre job gains in recent months, and after a bit of a bounce-back in the last reading, we’re looking for a quite tepid jobs gain in October," says Avery Shenfeld, chief economist at CIBC Capital Markets.

"The Bank of Canada Governor and his Senior Deputy will make an appearance, but there’s little room to add to what they said this past week. We also don’t expect any major new announcements in the federal fiscal update on Thursday," Shenfeld and colleagues said on Friday.