The Pound to Canadian Dollar exchange rate climbed back toward two-month highs early in the new week but could have difficulty extending its recovery much further in the days ahead unless this Wednesday's Bank of Canada (BoC) interest rate decision leads to a surprise upset for the Loonie.

Sterling was trading near to some of its highest levels since early August when approaching 1.56 against the Canadian Dollar again on Tuesday.

It had risen close to 1.56 on Monday but was beaten back when former Chancellor Rishi Sunak emerged as the governing Conservative Party's candidate to become the UK's fifth prime minister in six years, placing the economy on course for a period of frugal fiscal policy.

Budget policy will eventually act as an added headwind for the UK economy so may be partly why Sterling's rally was quick to dissipate on Monday, although it's Wednesday's BoC decision that matters most for GBP/CAD this week.

"Beyond the decision to hike by 75bps this week, the key will be whether the Bank communicates a shift to smaller incremental hikes going forward," says Bipan Rai, North American head of FX strategy at CIBC Capital Markets. 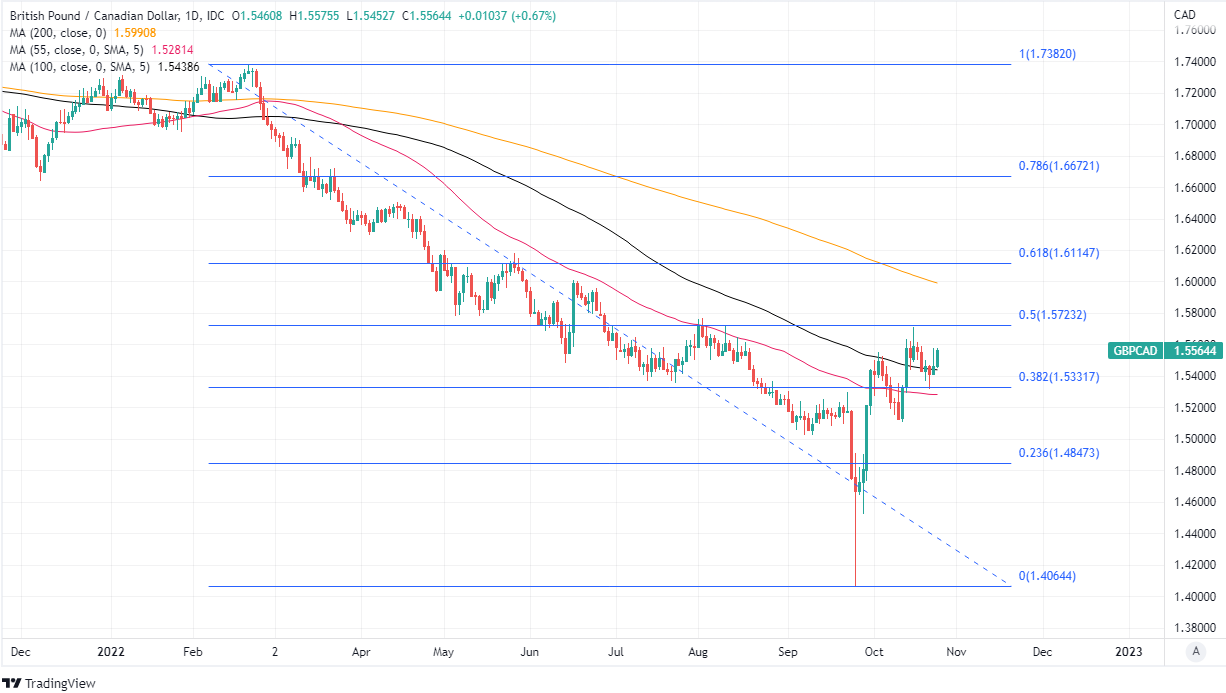 "Keep in mind that current policy settings are above neutral, and that the Bank can’t ignore the financial stability risks forever," Rai said on Monday.

The BoC is widely expected to lift its interest rate by three quarters of a percentage point for a second time running this week, taking the cash rate up to 4%, but some strategists say there is a risk or chance of the bank warning on Wednesday that it intends to raise its interest rate more slowly in future.

This would potentially lead to something of an upset for the Canadian Dollar given the extent to which it has benefited in recent months from the BoC's hawkish interest rate policy, which has seen it lifting Canada's cash rate in line with the Federal Reserve as it has raised U.S. interest rates.

That has helped to keep the U.S.-Canada interest rate differential stable and enabled the Canadian Dollar to outperform other currencies including Sterling, although some strategists see BoC interest rate policy as on the cusp of becoming a burden for the Loonie rather than the boon that it has been so far.

"It was the last to be hit in the G10 by the USD wrecking ball this year. We do not think the USD is done wreaking havoc on this currency. We have adopted a very bearish stance on the CAD since June," says Mazen Issa, a senior FX strategist at TD Securities, in reference to the Canadian Dollar.

"Our overarching rationale has been that the outright awful outlook for household debt servicing should lead to a data domino, dragging the CAD through the mud," Issa and colleagues said last week after reiterating a forecast for USD/CAD to rise back above 1.40 in the weeks ahead. 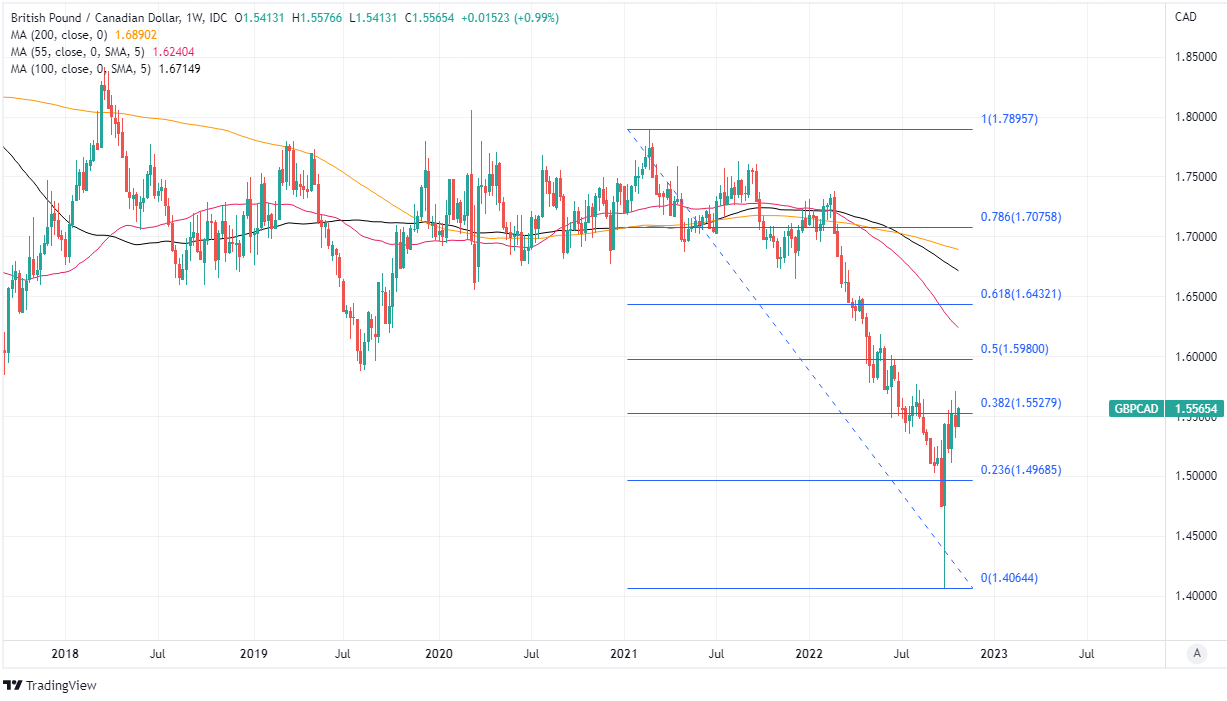 Issa looks for the BoC to raise its cash rate to 4% on Wednesday but says this won't help the Canadian Dollar in the same way it might have previously because Canada's faltering economy and cooling housing market are likely to prevent the BoC from raising rates much further up ahead.

Another large interest rate rise would not help the economy and may make the housing market correction worse but is still expecteddue to inflation rates that remain elevated at multiples of the BoC's 2% target.

This is why TD Securities and CIBC Capital Markets look for the Canadian Dollar to weaken and USD/CAD to rise following the decision.

That would be a potentially supportive outcome for GBP/CAD as this tends to closely reflect the relative performance of Sterling and the Loonie when each is measured against the U.S. Dollar.

"A 75bps hike is more or less fully priced in the aftermath of this week’s higherthan-expected CPI data. This will take the Overnight Target rate to 4.00%; our recently revised house call suggests only limited additional tightening is likely after next week," says Shaun Osborne, chief FX strategist at Scotiabank.

"Any messaging that the Bank can start to consider “fine-tuning” rate hikes will hurt the CAD. Whether the Bank’s outlook and still elevated inflation allows the Governor to make that concession at this stage remains to be seen," Osborne said in a Friday look at the week ahead. 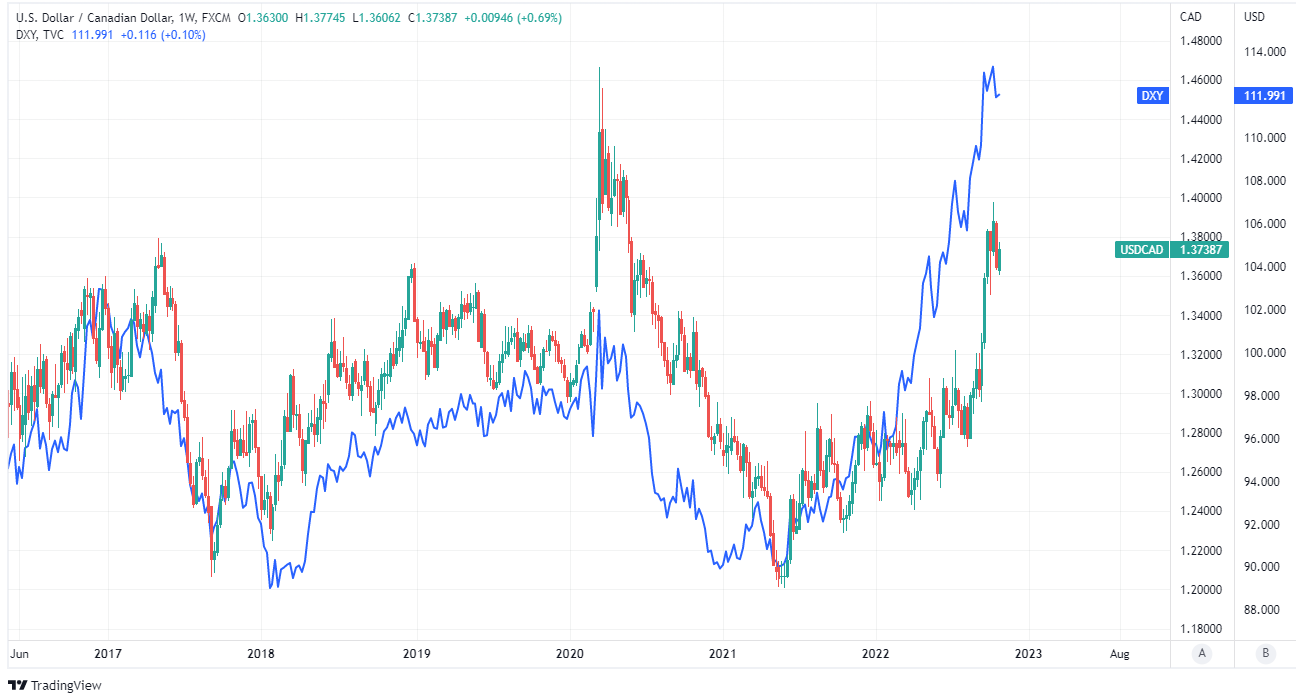 Above: USD/CAD shown at weekly intervals alongside U.S. Dollar Index.