The Pound to Canadian Dollar exchange rate's rally into the October month has given way to a corrective setback in recent days but Sterling found support just above the 1.51 handle early in the new week and could now be likely to consolidate its recovery for a short period.

Sterling staged a sharp rebound from record lows against the Canadian Dollar through early October before trading as high as 1.5552 on Tuesday last week but has since reversed around a quarter of this move in a setback that culminated in GBP/CAD trading as low as 1.5155 on Monday.

The latter is a level around which it may find further support this week if Sterling continues to take in its stride the latest developments in the UK government bond market where the Bank of England (BoE) has been providing emergency liquidity in order to address risks associated with some pension funds.

"Time-limited central bank backstops are not prone to succeeding in the long run. Usually, the market waits for the intervention to end before retesting the limits," cautions Neil Wilson, chief market analyst at Markets.com.

"Markets are like toddlers – always testing the boundaries, wildly overreacting and usually working to cause maximum mayhem at the most inconvenient times," he added in a Tuesday market commentary. 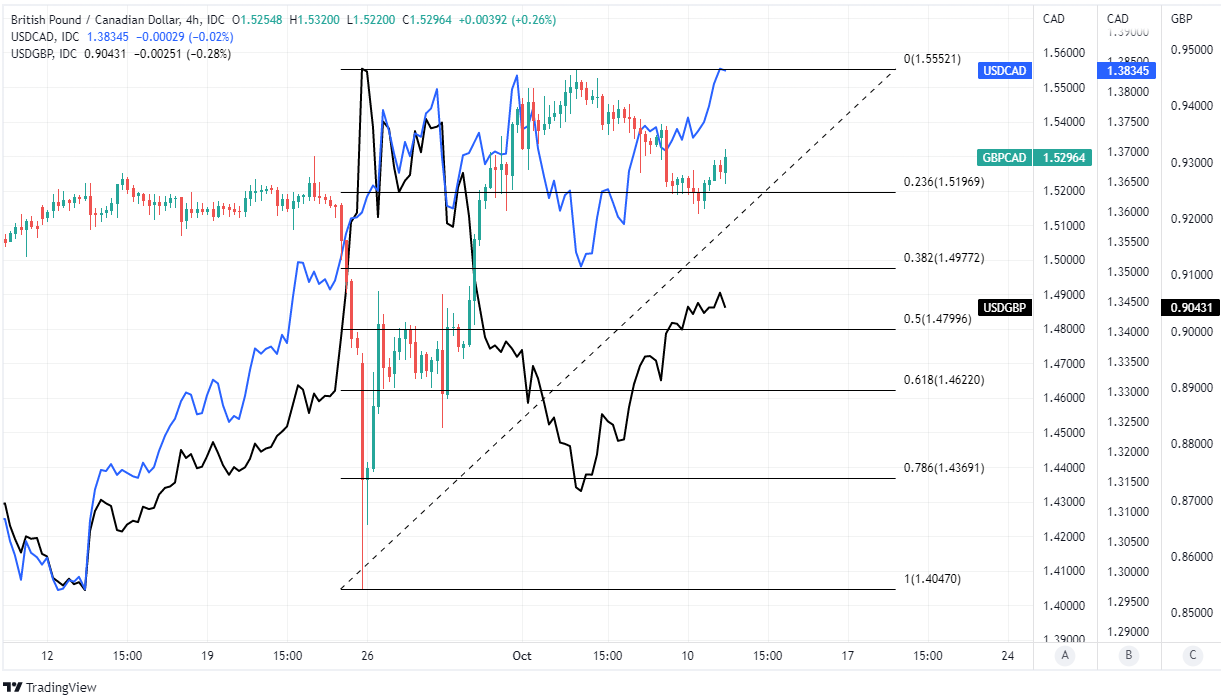 Above: GBP/CAD shown at 4-hour intervals with Fibonacci retracements of late September recovery indicating possible areas of technical support for Sterling and shown alongside USD/GBP and USD/CAD. Click image for closer inspection.

Tuesday's price action came after the Office for National Statistics said the UK unemployment rate fell from 3.6% to 3.5% over the quarter to the end of August and that annual wage growth reached 6% when one-off bonuses are included.

However, more timely figures released alongside the employment report also simultaneously revealed that September saw the largest one month increase in new unemployment claims since March 2021 and the aftermath of one of the 'lockdown' periods used in attempts to contain the coronavirus.

"Sloppy and highly dysfunctional price action around the turn of the month may have seen the low for GBPCAD established for this bear cycle. The sharp drop to a new low and subsequent rebound to close unchanged on Sep 26 is characteristic of a cathartic flush out of positioning that often describes a major market low," says Shaun Osborne, chief FX strategist at Scotiabank.

"We note bullish weekly (engulfing line) and monthly (bull hammer) formations emerged from the carnage of those late Sep moves in the GBP. While GBP gains have made some important headway (regaining the 1.50 area and holding (this week) around short-term retracement resistance at 1.5350) a retest of the late Sep lows cannot be excluded at the moment," Osborne wrote in a recent review of the Canadian Dollar charts. 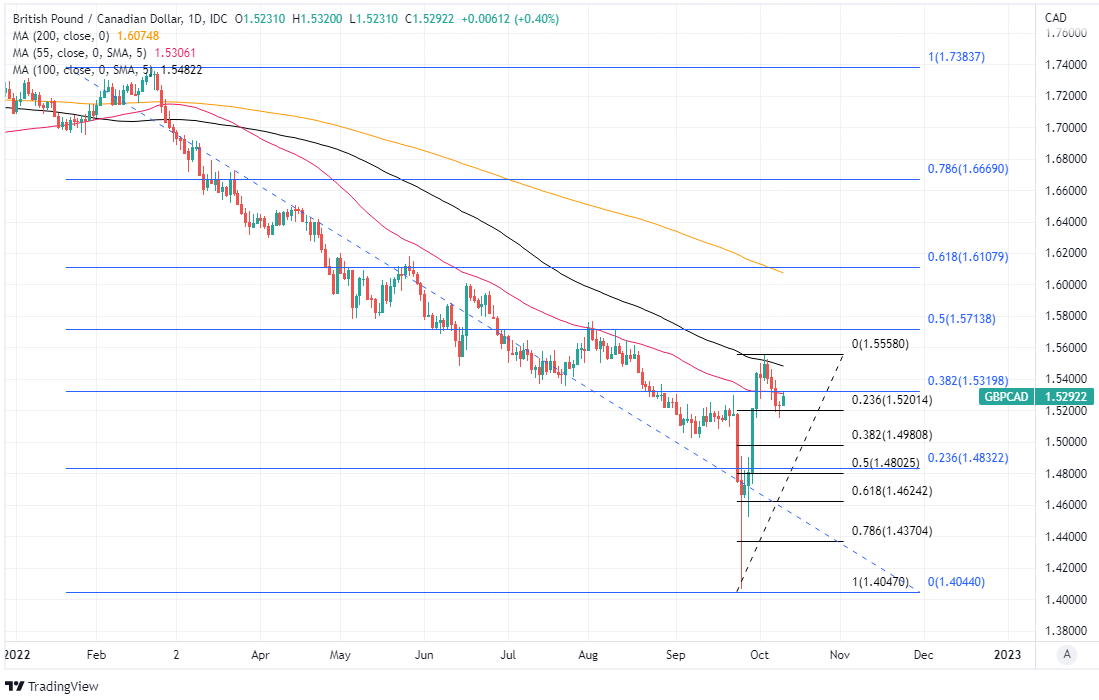 GBP/CAD's earlier setback was exaggerated last week following hawkish remarks from Bank of Canada (BoC) Governor Tiff Macklem and the release of a stronger-than-expected employment report in Canada where the labour market added jobs for the first time in four months during September.

"For the first time in a while, we heard the Governor speak directly to the currency noting that the “recent depreciation of the Canadian dollar in the face of US-dollar strength will offset some of this global improvement by making US goods and vacations more expensive for Canadians,” says Taylor Schleich, a director of economics and financial market strategy at NBF Financial Markets.

Governor Macklem was clear in last week's address to the Halifax Chamber of Commerce that Canadian interest rates will likely have to rise further before it can be confident that inflation will return to the 2% target in the years ahead.

While the hawkish monetary policy stance may have helped the Canadian Dollar last week it did little to keep the Loonie from slipping to new post-pandemic lows against the U.S. Dollar this week as recent underperformers became outperformers and vice versa. 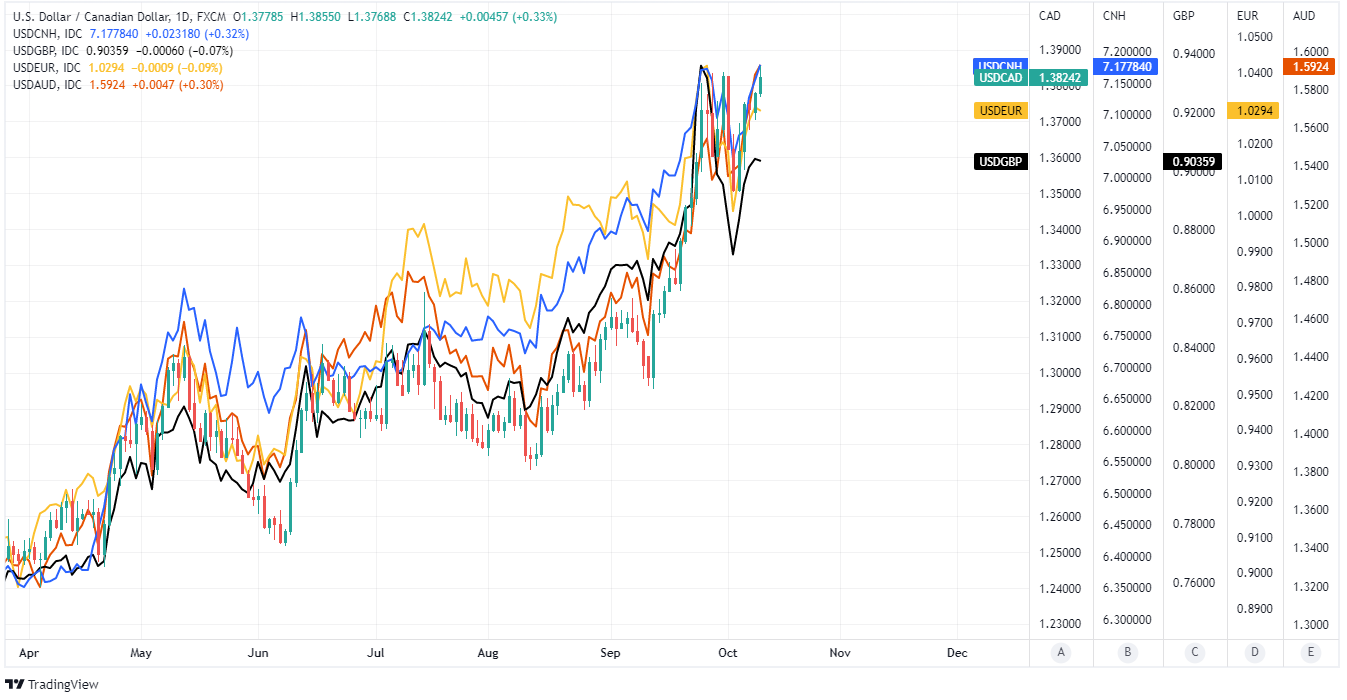 Above: USD/CAD shown at daily intervals and alongside other selected U.S. Dollar exchange rates.

"The US & Canada return today to find equities at the lows, UST10s back up at 4% and USD/JPY testing the BoJ’s resolve (spot 145.80)," says Elsa Lignos, global head of FX strategy at RBC Capital Markets.

"USD/CAD has followed the move higher in USD over the last 24 hours, breaking to a new 18m high of 1.3855. Typically what follows is domestic hedging interest to sell though that may need to wait for Toronto to come in," Lignos wrote in a Tuesday market commentary.

The recent rally in USD/CAD will have been one factor helping support GBP/CAD as the latter always tends to closely reflect the relative performance of Sterling and the Loonie when each is measured against the U.S. Dollar.

The Pound to Canadian Dollar rate would potentially fall from Tuesday's levels if USD/CAD turns lower later in the week but whether that happens or not is likely to depend in no small part on Thursday's U.S. inflation figures and the market's reading of what they could mean for Federal Reserve (Fed) interest rate policy.