"We think holding some longs into the dual employment reports makes sense, but ultimately we expect dips into 1.3550/00 to be very compelling buying opportunities," - TD Securities.

The Canadian Dollar showed reslience against a rallying U.S. Dollar in the penultimate session of the week but some local analysts' views on USD/CAD are now leaning more toward bullish in anticipation of a widening gap between Federal Reserve (Fed) and Bank of Canada (BoC) interest rates.

Canada's Dollar held its own against most in the G10 contingent on Thursday but lost ground to all except the Polish Zloty in the broader G20 grouping as the U.S. Dollar extended a midweek rally.

Gains by the U.S. Dollar lifted USD/CAD back above 1.37 and pushed the Loonie below $0.73 ahead of a Thursday appearance by BoC Governor Tiff Macklem at the Halifax Chamber of Commerce and in advance of Friday's job reports from both of North America's largest economies.

"US payrolls are more important, but we expect an asymmetric reaction profile for the CAD to domestic data; ignore the upside but react to the downside. We are on the hunt for another opportunity to get long USDCAD again," says Mazen Issa, a senior FX strategist at TD Securities. 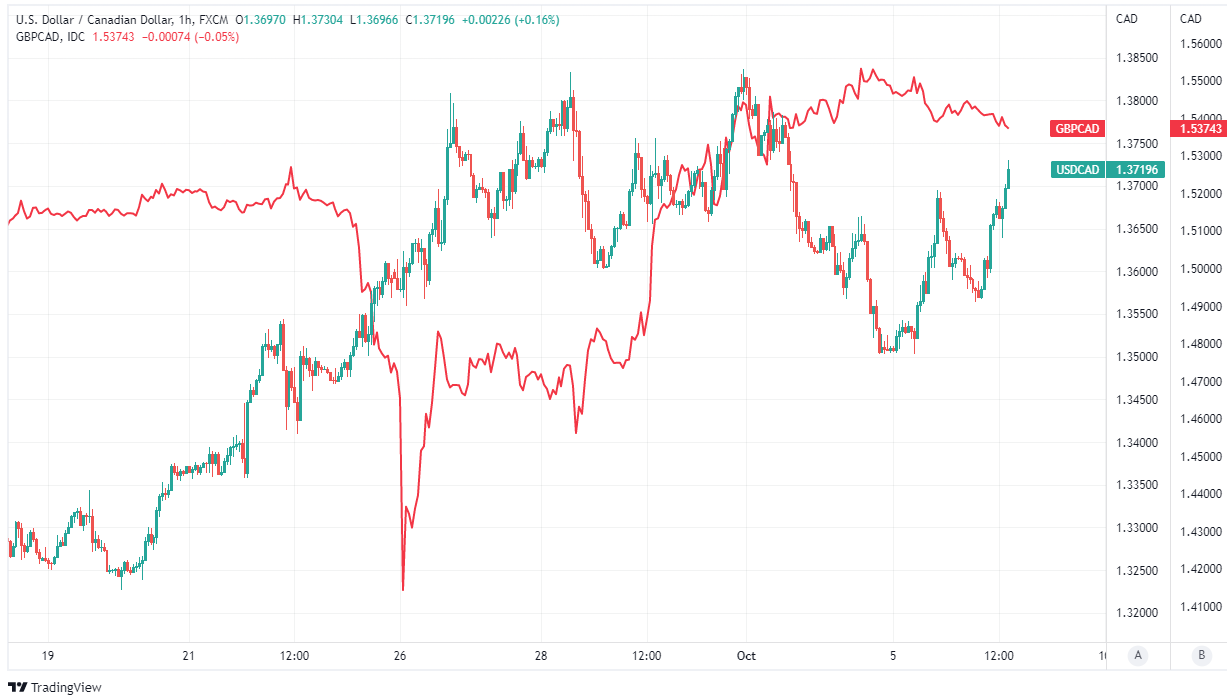 Above: USD/CAD shown at hourly intervals alongside GBP/CAD.

"We look for Canadian employment to rise by 45k in September, helped by a sharp rebound for education after a large one-off decline in August. Outside of education things look less upbeat, with little underlying momentum and further weakness in the goods-producing industries," Issa said on Thursday.

Canada's Dollar had benefited from a correction lower by the U.S. Dollar through the opening half of the week but the greenback drew a bid from the market again on Wednesday and one that appeared to be fueled by the September edition of the Institute for Supply Management (ISM) Services PMI.

That cast the largest U.S. economic sector in a more resilient light than economists had envisaged and was an outcome that will do little to deter the Fed from the steeper interest rate pathway illustrated by September's round of Federal Open Market Committee forecasts. 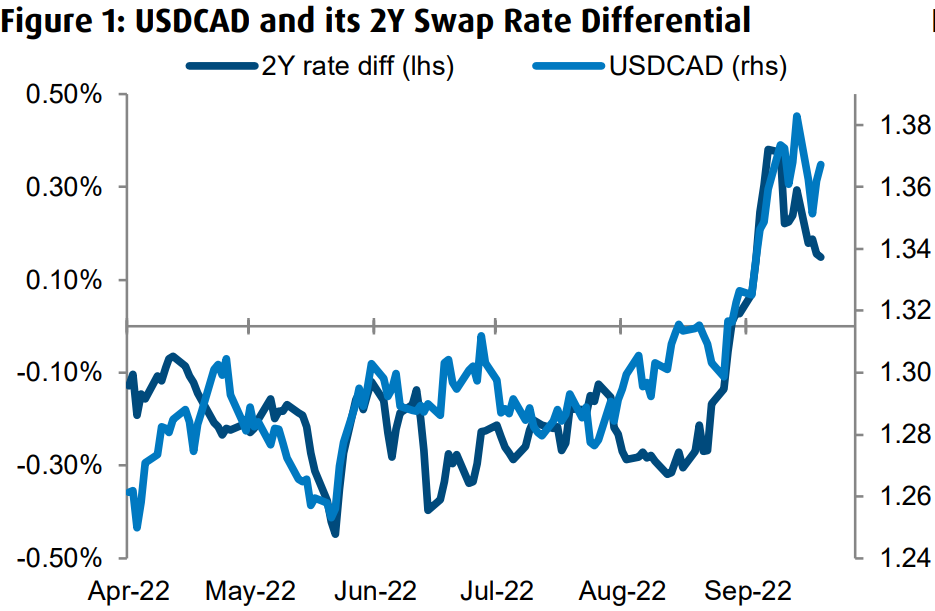 The Fed's steeper interest rate trajectory has been seen as a key driver of the Canadian Dollar's near 5% decline against the greenback since September 13 and the date at which Bureau of Labor Statistics figures showed U.S. inflation climbing sharply again for the month of August.

"The fact that spot USDCAD has since rallied beyond 1.38 alongside the rate move suggests to us that the FX market now has this 50bp differential in the two central banks' terminal rates pretty much priced in. If that's the case, we suspect it will take something more than that to move USDCAD higher," BMO's Anderson said on Thursday.

"A signal that the BoC is about to downshift to hiking in 25bp increments would do it. So would a signal that the BoC is likely to stop on a 3-handle. However, while we wouldn't rule out either scenario at this point, we give fairly low probability to Macklem being concrete about it at this juncture," he added.

So far in the cycle the Bank of Canada has managed to keep pace with the Federal Reserve, which has lifted its interest rate sharply since March this year including through three consecutive increases of 0.75%, taking the Fed Funds rate range up to between 3% and 3.25% last month. 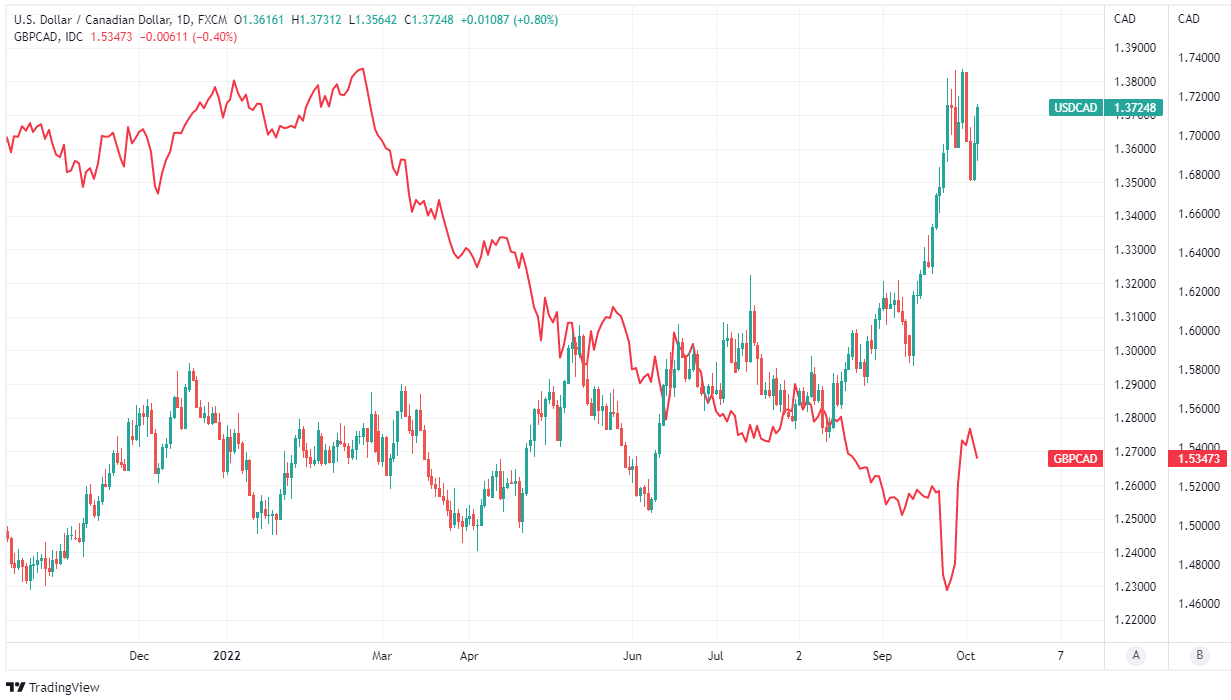 While that has limited the Canadian Dollar's losses against the U.S. Dollar there is now uncertainty over whether it wil be able to keep up in future, and this is effectively the rationale for why even local strategists are entertaining the idea of betting against the Loonie once again.

"We think the market is growing attuned to the debt servicing problem that faces Canadian households this quarter and beyond, which, in our view, will lead to a data domino. Given that backdrop, we think the CAD will trade asymmetrically to the data; ignore the upside and react to the downside," Issa said on Thursday.

"The recent retracement in USDCAD to as low as 1.35 was a healthy correction in our view; we think holding some longs into the dual employment reports makes sense, but ultimately we expect dips into 1.3550/00 to be very compelling buying opportunities," he added.

The TD Securities team says Friday's job reports from both sides of the U.S.-Canada border are likely to be the primary influences on USD/CAD in the lead up to the release of September's round of inflation figures, which are out in the U.S. next week and Canada the following week.

Meanwhile, Thursday's speech from Governor Macklem will likely be poured over for signs of a slowdown in the BoC's pace being near.